The original Guardians of the Galaxy was an absolutely fresh piece of entertainer from the Marvel stables that managed to win the audience by bringing together some of the biggest A-holes the cosmic universe could spit out. It was an obscure Marvel title that made global stars out of a raccoon and a tree for crying out loud. And, most importantly all this was achieved with a relatively new director, James Gunn, helming this vision.

Three years later, director James Gunn is back with his weird set of goofballs for yet another space adventure promising us more of the same in the sequel, Guardians of the Galaxy Vol.2

And therein lays the problem with the movie. It remains ‘more of the same’. The sequel, which now comes with the expectations of its fan base, fails to really notch up things because gone is the freshness that the original provided. 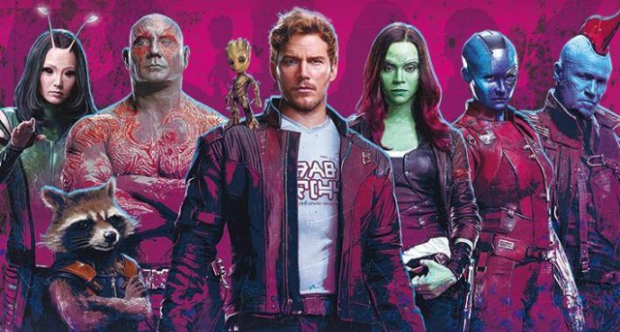 The story is set shortly after the events of the original, and we are taken right into the thick of actions as our gang of misfits is introduced in a middle of a big fight with an intergalactic beast as they defend some batteries from the monster. Gunn’s creativity is instantly on display as the title credits roll following the adorably cute Baby Groot’s dance moves to the awesome mix tape playing while the rest of the crew is busy taking care of the monster in the background. The sense of fun prevails and that sets the tone for thing to come.

We soon learn that the gang was specifically hired for the job by a race of genetically engineered super beings of the planet Sovereign led by Ayesha (Elizabeth Debicki) in exchange for Nebula , Gamora’s sister. But the same people soon are chasing our heroes across the space because the cheeky Rocket could not resist the temptation of nicking some of the very same batteries they were hired to protect.

A few blasts later across the space, a bickering Starlord Peter Quill and Rocket ends up causing their spacecraft Milano to come crashing down to a planet Berhart, after being saved by a mystery man. The mystery man is revealed to be Ego, a God/ a Living planet and one who also claims is the father of Peter Quill.

Peter along with Gamora and Drax decides to accompany Ego and his assistant Mantis (an alien with empathic powers but sans the social skils)  back to his planet so that Ego can explain things to junior Quill, while Rocket stays back with Baby Groot and their captive, Nebula, repairing their space ride.

Elsewhere, Ayesha has given the task of hunting down the Guardians of the Galaxy to our old friend, Yondu and his pack of space pirates, Ravagers putting them on the heels of our heroes.

What follows are lessons about sticking together and sticking out for your ‘family’, (not necessarily biological) and over blown CGI razzle dazzle with the customary apocalyptic climax sequence, from which I guess, there is no escaping.

As mentioned before, the plot just meanders along with some comic gags every now and then. They are generally hit and miss material and the self-referencing jokes loses its shine after a while.  The fact that the main plot about the Star Lord’s daddy issues fails to engage the audience means we are left to look for interesting bits from the subplots around – like the bonding between Rocket and Yondu, the sisters Gamora-Nebula angle and Drax’s new connection with the Mantis. Even though Kurt Russell was fine as Ego, The living planet, by the time things headed to the climax, it left me bored.

This also leaves our lead man Chris Pratt ending up as the least interesting bit as he goes about discovering his legacy as a mere spectator. Zoe’s Gamora gets enough time to explore her relationship with her sister Nebula (Karen Gillan) when she is not dealing with ‘unspoken’ things with Peter. We also find how Nebula could play a key role in the upcoming Infinity War as she vows to take revenge on her father Thanos.  Former wrester Dave Bautista does a good job of playing the goof head  Drax , who is in fact in charge of delivering the comic punches.

However the highlight characters remain the wisecracking gun wielding raccoon Rocket  (a terrific Bradley Cooper) and the cutesy Baby Groot (a different shade of Vin Diesel) who is certain to result in more huge sales of merchandise with the movie.

The soul of the film though is Michael Rooker as Yondu. He gets some of the best moments in the film, and works out a good combination with Rocket. And he also gets to feature in one of the cool action sequences letting out his Yaka arrow in full whistling glory.

The odd ball characters aside, Gunn’s main USP of this space comedy adventure is the music. He digs deep back into the tunes of the 70s and peppers the screenplay with the likes of Fleetwood Mac, Cat Stevens, George Harrisson , Looking Glass among others,. Gunn manages to incorporate the songs charmingly into the scenes (or in certain cases even write the scenes around the song).

Pop references to the 80s with Pac man, Cheers, KnightRider and David Hasselhoff would also keep a nostalgic generation amused while the other newbies left scratching their heads.

Yet all the music and pop references and even sly cameos, goofiness and cutesiness, not to forget elaborate sets and extensive CGI landscapes cannot save the film from appearing to be a mere cash minting exercise because the film about family bonding does not really have a concrete story to bond it all nor does it help in bridging the link to the MCU universe.  This is without a doubt a rather weak sequel from the Marvel Studios. Even the five post credit moments may do very little to eventually change that.