akuri…and a pinch of hope is a short film that’s been released online a few weeks ago, here’s the director Jamshed Roointon talking about the making of the film and more. 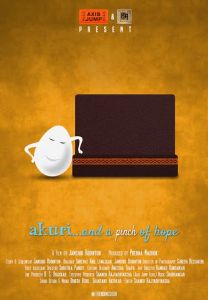 The Inspiration and How it all Started

A major inspiration is today’s competitive and fast-paced metropolitan life. Have you realised, we are all running, always in a rush to achieve something but at the end of the day we feel heavily underachieved and dissatisfied. So, what are we always running for? Today, so many people, young and old alike, go into depression. Every second day, you hear horrible stories of people committing suicide or getting into addictions, because things are not going right for them at that moment in their life. It is really sad because when one person ends up taking this decision, that decision ends up setting off a chain reaction, affecting the family, spouses, children, parents, siblings, friends and so many more people whose lives would be directly or indirectly influenced by or dependent that one person. Maybe, if we can just take the foot off the pedal every once in a while, sit back and instead of ruing what we don’t have, put more efforts into thinking how we could make our lives better, we would be a happier bunch.

Hence, I thought of making a film and spread this message digitally to millions. Without trying to sound all philosophical and preachy, I’d like to say, life doesn’t always deal the right cards for us but every negative we face, always has a positive hidden somewhere and it is upto us to find that positive, that inspiration. And although we mostly find it within us, we cannot discount the people whom we meet in our lives to give us that inspiration.

A while back, on a Radio station, I heard a listener share this beautiful, short encounter he had with a stranger on a train. I was absolutely touched by the man’s experience and had this smile on me the whole day. It got me thinking; we actually have no idea what experiences life can throw at us. Sometimes, it doesn’t make sense, the short periods of time some people come in our lives, or the outcomes from what they say or do. Some short, unplanned encounters may end up entirely altering your path in life. I thought of exploring what could happen if two people, completely unknown to each other and poles apart in their characteristics, met. This forms the crux/plot of akuri…and a pinch of hope.

The reason to make a short film on this thought is because the thought itself is so strong that I wanted to stay true to the crux of the message and drive home the point without delving into extra frills and taking too much time of the viewer. Making a short gave me a lot of liberty creatively, as well challenged me as a filmmaker to convey the message in the shortest time possible.

The influence of Zoroastrianism in the short film-why and how

More than Zoroastrianism – the religion, it is the Zoroastrians’ approach to life which I have tried to show in the film. Most people, specially in Mumbai, may have come across a Parsi at least once in their lives and there is a high probability that they may have been affected in a positive way by him/her. Parsis, as a people, are happy-go-lucky, positive, progressive, gregarious, lovable and most importantly very helpful. And they strongly believe in the social, economic and humanitarian development of the environment they reside in. Hence, you can see that despite being a minority in the truest sense, their contribution has been noteworthy. Zoroastrian morality can be summed up with the following, ‘Humata, Hukhta, Hvarshta,’ which translate into, Good Thoughts…Good Words…Good Deeds!!

A second point. It’s more to do with my misgiving about the portrayal of ‘the quintessential Parsi’ in films over the decades. Apart from a handful of films, we have always been shown this stereotypical, quirky and slapstick Parsi. who somehow does not dress in anything other than a sudreh and pyjama along with his red cap, or a loud aunty with a glass breaking voice, which would put the opera singers to shame in an equally loud gara sari and neither the man nor the woman can speak a single sentence without being irritatingly lyrical. (smiles) There is more to a Parsi than just that and ‘Eh Dikra’ or ‘Eh Bawa,’folks. We are normal, just like you and the people around you. (laughing).

This being a short film and with a very stringent budget involved, I was quite conscious that whoever associates with the film should do so because they have connected with the essence of the message that I intended to put across to the world.  I think I have been really fortunate in getting my team together. Each and every team member has only bettered my vision by more than excelling in their respective departments and contributed equally to bringing akuri… to such a sweet fruition. Really, I cannot thank them enough.

I did get the absolute right fit for all my characters which has in turn helped make the characters more real and the film more relatable. Ever since Akuri was conceptualised, DG, Darshan Gokani, was my Cyrus. And all efforts by my team, including DG himself, to at least meet a few Parsi Actors and see if someone fits, fell on deaf ears. The witty humour, the masti and the talkativeness and the need for Cyrus to say something big in a matter of fact way. I just knew it had to be DG. And boy has he done justice. If I didn’t tell you his real name, you wouldn’t realize he is Non-Parsi. 🙂

On the other hand, for Sadiq I had to wait for quite some time. I needed deep, intense eyes, which expressed a hundred emotions without uttering a word, a complete contrast to Cyrus’ character. I met Sushant for a narration after watching an Indie film in which he had acted and my EP/Film Editor, Shankh Rajyadhyaksha had edited. Just seeing Sushant’s reactions and expressions during the narration. I jumped with joy after coming out of the narration. I had found my Sadiq. And the wait was worth it. For the Irani Cafe owner, I needed an actual Parsi/Irani actor, for whom the nuances and the little actions which are peculiar to Parsis/Iranis came naturally, especially the gaalis, which of course sound too sweet to be offensive. I met Firdaus uncle on the set of my friend’s film shoot and I instantly connected with him. I could totally visualise the cafe owner in him. And he was so elated when he came to know we would be shooting at Military Cafe. It has been his and my favourite Irani cafe. He once said in jest that life has come a full circle for him, from being a regular customer to becoming the owner. The importance of that character in the film can only be felt and not explained. And Firdaus uncle has absolutely nailed the character.

Interesting incidents while making the film?

We wanted Shaan to lend his voice for Hope Ki Rope which finds its way in the opening and closing credits of the film. I didn’t know him personally and was trying really hard to get in touch with him. While talking about the film, I came across Mr Riyaz Amlani who’s been in the Bollywood/music industry since long. We met Shaan through him and the rest as they say is history 🙂

Post release digitally, there has been an overwhelming response from the viewers. I feel glad and very fortunate at being able to connect with them and successfully put across the message I wanted to through the film. The main aim is to make the film and its message reach out and touch as many souls as possible globally. Having said that, akuri…and a pinch of hope has received Official Special Screening Invites from a couple of prestigious International Film Festivals overseas, which is great news as it presents an opportunity to spread the message on a Global Platform with a tremendous following.

You can watch the movie here: