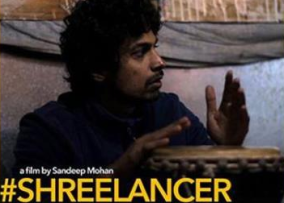 Director Sandeep Mohan debuted with the critically acclaimed Love Wrinkle Free that was released under the initiative of PVR Director’s Rare. But dealing with the Censor Board proved to be a bitter experience for Mohan. And he decided to completely bypass them with his next venture Hola Venky.

Under the initiative called The Great Indian Travelling Cinema, Mohan screened Hola Venky across the globe in varied venues such as Cafes, Bars, Art Galleries and Corporate Offices.

The filmmaker whom can be rightly called as a true-blue Indie filmmaker is back with his latest venture Shreelancer. The film which stars Arjun Radhakrishnan in the titular role is the story of a freelancing copywriter who embarks on a journey of self discovery.

Shreelancer which is edited by Shreyas Beltangady and shot by Subhash Maskara, will premiere at this year’s New York Indian Film Festival. And like Mohan, we hope that a theatrical release will follow.

Meanwhile, here’s a dekko at the film’s interesting trailer. Do let us know your views on it.