The trick with mixing up genres is to make sure that the story contains the right mix of the conventional and the subversive. It’s always fascinating to see the supernatural element presented on screen out of the traditional genre of horror and even more interesting when comedic and romantic elements are added into the mix. Therefore, when the promos of Phillauri showed up, promising an amusing tale of a young groom haunted by the spirit of a feisty woman from a different era, one did wonder if Anushka Sharma has something new up her sleeve, or is Phillauri another case of old wine in a new bottle?

Kanan (Suraj Sharma) is a young Canada settled musician on his way back to India. He is going to be hitched to his childhood sweetheart Anu (Mehreen Pirzada), and is not too happy about it, as he feels that it’s too early to settle down. His misery is compounded by the fact that the family astrologer has found a fatal flaw in his horoscope, which can only be countered by him marrying a tree. To add to his woes, the tree he “marries” has the spirit of Shashi (Anushka Sharma) residing in it, and as a result, she is now bound to Kanan’s fate. As the days to Kanan’s wedding get closer, things get crazier. And the questions persist such as will he be able to put aside his reservations about the wedding and find happiness with Anu? Will Shashi be able to make her peace with her past involving an ill fated romance with a rakish singer, Roop Lal (Diljit Dosanjh)?

One must admit, debutant director Anshai Lal makes an admirable attempt to narrate a tale that’s heartwarming and also a tad hatke. But he is let down by the extremely slow pace of the screenplay, the culprit being the extremely lacklustre and self-indulgent writing by Anvita Dutt. It is all the more disappointing as with a plot like this, there was massive potential to make an epic romance or an equally epic laugh riot. But the screenplay fails to balance both genres properly, and thus wastes some absolutely fine performances by trying too hard to be subtle. It also squanders away opportunities for comedy as well as drama, leading to most pivotal sequences not only being flat, but also unbearably long. Technically, Phillauri is fabulous, thanks to Vishal Sinha’s dream-like cinematography that captures early 20th century Punjab beautifully. 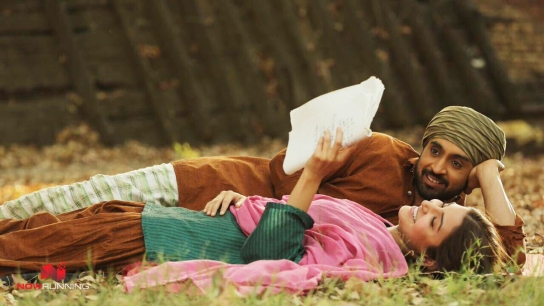 Anushka Sharma as the feisty, yet friendly spirit, Shashi is absolutely fantastic, and lights up the screen in every scene she’s a part of. Her comic timing is top notch, and in the dramatic sequences, she elevates the proceedings with absolutely minimal effort. Suraj Sharma is funny at first, but after a point, his “OMG I’M AN NRI, GET ME OUT OF HERE” shtick begins to grate on the nerves and makes you wonder what his character’s adorable fiancé sees in him. Mehreen Pirzada who made her debut in last year’s Krishna Gaadi Veera Prema Gadha is adorable, and puts in a fine performance, in spite of a criminally underwritten role. Diljit Dosanjh is fine, as the charismatic, yet rakish minstrel, but he underplays his part so much, that it barely registers with the audience.

To sum it up then, Phillauri’s one of those movies that’s so ok it’s average. It is a movie that could have been so much more, but is held back by some dull writing, and amateurish execution of the plotline.