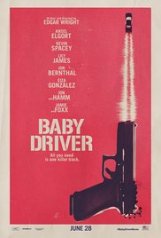 With features such as Shaun of The Dead, Hot Fuzz and Scott Pilgrim vs. The World, Edgar Wright has established himself as one of the better directors of recent times. His latest film Baby Driver is the story of a young getaway driver (Ansel Elgort) who is forced to work with a mob boss and later partake in a heist that seems to be destined for doom.

The film also stars Jon Hamm (of Mad Men fame), Jamie Foxx and Kevin Spacey. Written by Wright and shot by his his frequent collaborator Bill Pope (Scott Pilgrim vs. The World, The World’s End), Baby Driver is scheduled for a June release in U.S, U.K and other international markets. The film is also tipped to have an India release unlike Wright’s previous films.

Meanwhile, have a look at the film’s trailer and let us know your views on it.