Given that a good number of debutant directors usually prefer to stick to a safe subject that’s audience and box-office friendly, it was a bit of a surprise when the promo of Shuddhi showed up on YouTube in February, and ended up garnering a massive number of views, and considering that the subject matter involves Violence against Women (VAW) and the much abused Juvenile Justice act, in the backdrop of the 2012 Delhi Gang Rape, the audience expected some strong storytelling. So, is Shuddhi a powerful indictment of the situation that women face in India, or yet another cinematic aberration that attempts to use current events for sheer shock value and nothing else? 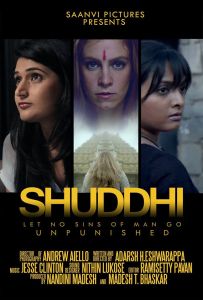 Post the 2012 Delhi incident, the country has been on the boil, and with the news of the youngest of the rapists escaping life imprisonment on account of being a juvenile. Two young journalists, Jyothi (Nivedhitha) and Divya ( Amrutha Karagada) are extremely angered by this, and decide to denounce the limitations of the Juvenile Justice Act as well as the heinous act of rape to the public, in the form of street plays, with Jyothi going deep into the research of high profile rape cases to incorporate into the play. Meanwhile, an American photo-journalist, Karylyn Smith (Lauren Spartano), turns up in Bangalore in order to make her peace with a painful past that involves her traversing most of Karnataka. Will Jyothi and Divya be able to make the public see the light? Will Karylyn’s journey help her escape her demons?

First things first, kudos to debutant director Adarsh H Eshwarappa for eschewing the standard entertainer formula, and instead trying to create a more topical cinematic experience, that not only opens the audiences eyes to certain issues, but also keeps them on the edge of their seats with a riveting narrative. He manages to seamlessly incorporate incidents of true crime, as well as mythological elements such as the legend of the Goddess Durga, and the legend of the River Cauvery in order to add that extra punch to his story, without resorting to cheap shock value inducing gimmicks. There are certain rough edges in his maiden offering, the most jarring being the awkward transitioning between certain scenes, and the languidly paced first half that takes its own sweet time getting to the actual plot, though the compellingly written characters just about manage to keep you occupied. It’s towards the intermission point that the story kicks into high gear, and from then on till the climax, it doesn’t let the audience’s attention waver for even a second, and for a director to be able to achieve that level of narrative skill on debut can only augur well for the Kannada industry.

Performances wise, Lauren Spartano is an absolute revelation, as the enigmatic Karylyn who is on a journey through Karnataka to try and outrun her inner demons, and puts in an almost pitch perfect performance that’s only let down by the extremely pedestrian dialogues, especially in the second half. Nivedhitha is absolutely adorable as the spirited journalist with her expressive and cherubic face doing all the talking. Amrutha Karagada too makes a fine impression, although one did get the feeling that her character felt a tad underdeveloped compared to the others. Theatre actor Shashank Purshottam as the tough cop and National Award winner Sanchari Vijay in a cameo as a spoilt brat are absolutely brilliant in their roles, as are most of the supporting cast.

One thought on “Shuddhi Movie Review: The Dawn of Durga”