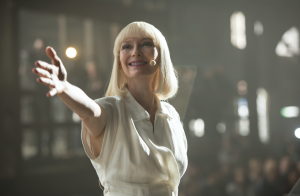 It has been selected to compete for the Palme d’Or in the main competition section at the 2017 Cannes Film Festival. It will then be released on June 28, 2017, by Netflix.

Plot: Mija is a young girl who risks everything to prevent a powerful, multi-national company from kidnapping her best friend – a massive animal named Okja. Following her across continents, the coming-of-age comedy drama sees Mija’s horizons expand in a way one never would want for one’s children, coming up against the harsh realities of genetically modified food experimentation, globalization, eco-terrorism, and humanity’s obsession with image, brand and self-promotion.

Check out the teaser-

And now here’s the trailer as well-

Note- The post has been edited on 18th May and the trailer has been included as well.