Based on the popular play of the same name, Chandrakant Kulkarni’s Dhyanimani tells the story of Samir (Abhijeet Khandkekar) and Aparna (Mrunmayee Deshpande) who decide to visit Sada (Mahesh Manjrekar) – an ex-student of Samir’s father. Sada lives with his wife Shalini (Ashwini Bhave) and son Mohit in Roha and is working as a project manager for an upcoming resort. Mohit is gone for a picnic when Samir and Aparna arrive. Shalini pesters Sada to find where Mohit is when he does not return from the picnic even as the night beckons. But a shocking secret awaits everyone.

From the first scene, a sinister undercurrent prevails in the film. The proceedings have an eerie feeling throughout, including the scene in which we are introduced to Sada and Shalu. It also hints towards a secret this presumably happy couple (whose discussions largely revolved around their son) maybe hiding.

Assuming these cues to be insufficient, a loud background score (Ajit Parab) also draws your attention towards this twist which intends to jolt audiences when it is finally revealed. But the manner in which these cues along with the overbearing background score are used, it only helps the audiences to guess the big reveal. And therefore, when the twist in the tale is finally revealed, the audience is not really shocked or taken aback the way the makers would have expected them to.

In recent times, several acclaimed yesteryear Marathi plays have been adapted for the big screen including Katyar Kaljat Ghusali and Natsamrat. Like its predecessors, the manner in which Dhyanimani approaches the core conflict seems dated and theatrical. It seems that there isn’t much upgradation in the play’s onscreen adaptation, considering the old world sensibilities the film operates upon.

The film also tries to dwell on issues such as marital discord and a lack of intimacy that seeps among couples as they become parents and grow older. But these interesting plot points get lost as the film does not dwell much upon them and get overlooked ultimately.

For a film that deals with a psychological premise and a serious one at that, one wonders why the protagonists never think of seeking professional help for the same. Further, the solution offered by the film (for a problem that gets serious as the film proceeds) during its climax seems absurd and makes you wonder about its consequences, were it to be ever implemented in real life. 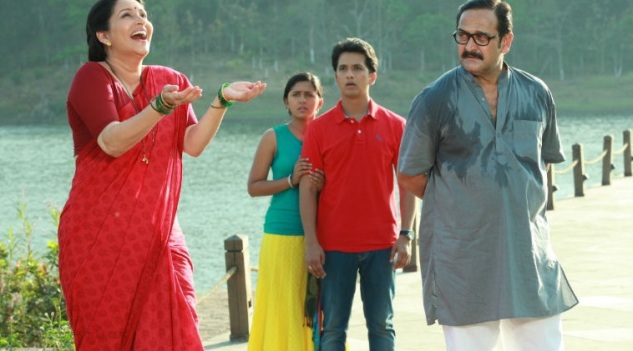 Manjrekar, Khandkekar and Deshpande chip in with performances that seem believable in comparison to the loud tone of the film. However, Ashwini Bhave’s performance seems unnecessarily loud, over the top and does enough to detach us from her character and the film. Some restraint in her performance and dialogues along with the script (Prashant Dalvi) would surely have made her character and the film far more relatable. A similar thought also extends to the overall film and its execution. Some subtle execution by director Chandrakant Kulkarni (who had also directed the play) would have done more justice to the film and its thought provoking premise.