In the perfect world – everything ought to be awesome. And with THE LEGO MOVIE, it did manage to capture that idea and make it come alive on the big screen. It was a perfect template to pick and choose characters from various intellectual properties and have fun with the toys and make a story around it as you go along. It struck a chord with the inner child in us and went on to stand out as one of the best movies of that year.

Three years later, the spin-off arrives, this time however focused on one specific charter from the original – the caped crusader, Batman.  So if you are someone living under a rock with no idea about the Batman movies or stories, you can give it a complete miss.

But for the rest, (which is almost everybody), The Lego Batman movie is a worthy-watch. It is one of the rare Batman movies on the big screen that is actually about the man beneath the mask without going back to being an origin story. It has more depth and exploration of the crime fighter in ways where the big feature films have failed or rather cautiously chose not to. And yet, it is a riot of a comedy that is reminiscent of last year’s Valentines Day offering – Deadpool. 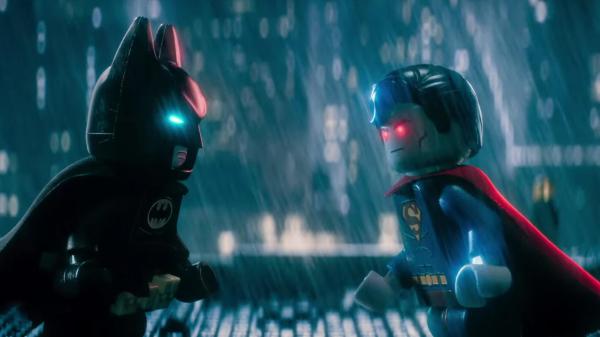 THE LEGO BATMAN MOVIE kicks off with all the Gotham city’s A to Z grade villains coming together under Joker’s leadership to destroy Gotham city, only to have Batman storm in to beat them down, brick by brick, to a theme song written, composed and performed by Batman himself.  This is followed by one of the best scenes of the movie, one where Batman declares that Joker as a villain means nothing to him as “he does not do ‘ships’ (as in relationships)!”

Exactly at this point you get a villain that is ‘hurt’ , a hero that is ‘stone-cold’ and we realize that these face-painted bricks on screen are displaying personalities that even live performances were found wanting in earlier features.  And the scene would come in a pleasant surprise, especially if you just strolled in hoping another average kiddie fare.

While, our hero goes back happy being the hero of the day, Joker hatches yet another heinous plan to destroy everything Batman has worked at protecting, hoping to get the not-so- dark knight to finally admit that the Joker is the crusader’s greatest foe after all. Meanwhile trust ol’ Alfred to pour in some wisdom on how Wayne should be leading his life, while the new Commissioner in town, Barbara Gordon, too wants to get rid of the city’s crime without the services of a vigilante. To all this chaos, comes in an orphan boy who gets adopted mistakenly by Mr Wayne and soon Batman finds himself having too much on his plate to handle. And yet, as always, he refuses help because the Bat works alone! 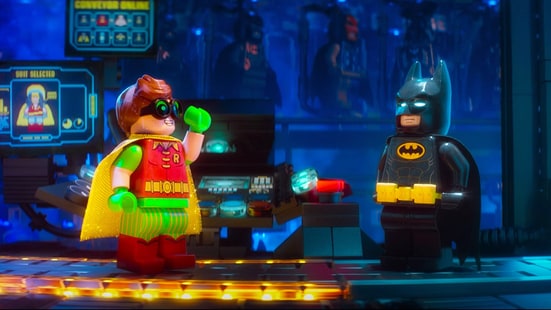 For a change, our hero is not the perfect noble soul. Here he comes off a narcissist, pompous,   and arrogant jerk, continuing from where he left off in the original LEGO Movie . All his flaws are intact, only magnified this time around as Wayne seems to be channeling an inner ‘Tony Stark’ of sorts (or more close to Trump, I would say).  Here he is a loner who has serious issues in commitment and family bonding, using his crime fighting as an excuse from accepting his reality.  The movie attempts to impart values of team work  and reminding us how we need to change ourselves if you want to be a hero to someone else. And if you did not get it, then Michael Jackson’s ‘The Man in the Mirror’ track is blared out for you to make sense of it all.

As expected, this parody is full of pop cultural references , especially sort of paying homage to the whole Batman appearances  on the big screen, right unto last year’s Batman Vs Superman and Suicide Squad. Even Marvel is not spared from the jokes. However, not all of them hits the mark but the hits outnumber the misses by a fair margin. And you would probably need a few repeated viewings to get all the jokes and ‘blink blink’  ‘tongue in cheek’ references sprayed around.  (Like the aircraft sequence in the opening, similar to the Dark Knight Rises one, has an aircraft that reads McGuffin airlines )

And the voice acting is one awesome aspect. Will Arnett nails it as Batman/Wayne, giving his character that certain likability even while sounding as a total jerk. Michael Cera works off the ‘Arrested Development’ equation in successfully working out the naive Robin, while Rosario Dawson comes off strong as Commissioner Barbara Gordon/Batgirl.   Zach Galifianakis proves to be an effective Joker, at least for this format.

But the film suffers on one major count- in its predictability. The freshness and impulsiveness of the original LEGO Movie is missing.  Instead here, it follows a chartered course right to the mandatory ‘big bang- city destroying’ climax that is the curse of every other comic book superhero adaptation out there. It is rather strange that the movie depends on villains from other ‘movies’ and ‘franchises’ as major plot points, when there were enough characters to choose from within the DC universe itself. The ploy just did not feel organic in its structure. And thereby, there is a fair share of yawn inducing portions in the middle of the movie as it begins to derail.

Even the dependence on big grand action set pieces does not come off as a great idea, because the animation makes it all blurry and you really cannot follow all the action. However a word of praise for the extreme detailing that has gone into building the Gotham world. Wish director Chris McKay and his team of writers had not hit a brick wall while coming up with a suitable final act and instead chose to keep it smaller and simpler.

Still, The Lego Batman Movie is entertaining enough to keep the Batman fans interested and entertained.  However, it stumbles over a brick or two trying to reach the heights of awesomeness set by its predecessor.