Not a real superhero, but a brilliant man and ideally should be a super hero, not the one we want, but the one we need (Much like Trump, I too can copy lines from Batman. Prateek for President! 🙂 )

Captain Fantastic is a very Into the Wild meets Little Miss Sunshine meets Shawshank Redemption and somehow falls perfectly under a family drama! I am only surprised the movie didn’t make it to the Golden Globes list. Here’s hoping Moonlight is worth all the hype and not just a way to pacify the claims from last year. 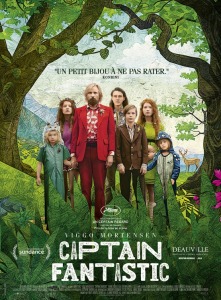 Set against the beautiful Pacific Northwest backdrop, Captain Fantastic is easily one of the most well nuanced films to come to mainstream cinema in the last few years.

The story follows Ben (Viggo Mortensen), a father of six, living deep in the forests of the pacific northwest, far from modern life. Ben is a great father…scratch that, he is a Fantastic Father, and the proof of that are his six children, from 17-year-old Bodevan to 7-year-old Nai who are fluent in philosophy, history and quantum theory (eat that Sheldon Cooper!). Not only are they a bunch of geniuses, they also have skills that could put Bear Grylls to shame! They can hunt and fend for themselves in the wilderness, from killing and cleaning a deer to mountain climbing in the open. Life is good….at least that is until the suicide of their mother which forces the family to clash with modern society, and then Ben realizes that he has in fact not prepared his children for what lies outside their forest.

The best part of this movie is the way it is presented to the audience. At first go, you tend to feel Ben is a bad father who puts his children in danger, then as the movie goes on, you realize that those kids are better equipped to survive the world than you are, and eventually you realize that even that isn’t enough…. Sacre Bleu!!

Actor turned director-writer Matt Ross, has a rare skill which he needs to nurture and develop. He somehow manages to present the movie’s main fight; intentions versus values and Matt is able to depict this struggle in a beautiful yet poignant manner. He does so skillfully, and presents both sides without picking favorites, which I feel would have been the toughest to do. 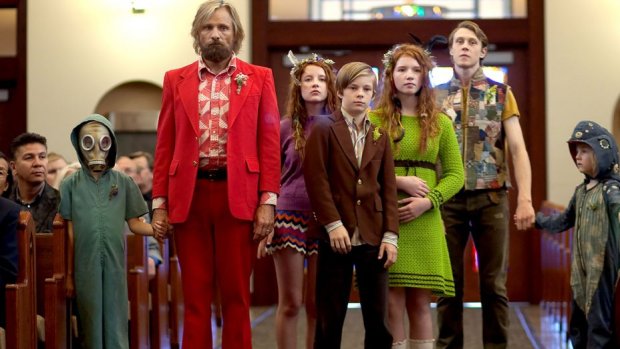 The cast is very good and Viggo Mortensen deserves his best actor nomination without a doubt. A devoted father who only wants the best for his kids. He is authoritative yet loving, a doting father and a loyal husband, a tough exterior with a heart of gold etc. Things which the entire North Korea raves about Kim Jong Il…hmmm! The rest of the cast is par. The six kids, Bolevan (George MacKay), Kielyr (Samantha Isler), Vespyr (Annalise Basso), Rellian (Nicholas Hamilton), Zaja (Shree Crooks) and Nai (Charlie Shotwell) are all brilliant.

The movie makes an honest and straightforward comment on controversial issues in today’s society that are often taboo in the media such as mental illness, the hypocrisy with regards to children’s exposure to violence and sex, religion, and the flaws in the American education system. Its main plot addresses the struggle where everyone has the best intentions but not the same values. The film manipulates your views of society, government, parenting, education and all the  difficult choices that must be made whilst raising children in today’s society, at such a high degree that all you can do is sit back and applaud at this great example of a film with a genius plot.

It’s a perfect film for those with a bit of an open/questioning mind and if you are interested in a solid family drama combined with a unique social experiment, you cannot go wrong with this. Grab your popcorn and get comfy!

Can't Say/Dunno.....wouldn't even know where to begin! View all posts by Prateek