‘Censor Virus –The New Plague’ is Dice media by Pocket Aces’ latest video sketch in association with the BakkBenchers. The video is a satire on how freedom of speech in India usually comes censored. It wittily chronicles what life would be if everyday conversations went censored just like in the ‘reel life’. 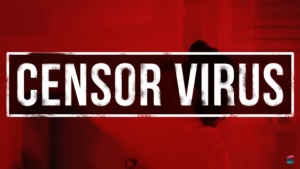 Starring in this video are the popular actors, Saqib Saleem, best known for his roles in Bollywood movies like ‘Bombay Talkies’, ‘Mere Dad ki Maruti’ & ‘Mujhse Fraaanship Karoge’ and the very talented Kartik Krishnan, known for his videos like ‘Every Indian Cricket Fan’, ‘Every Football Fan’ etc. on FilterCopy.

The video is a sketch of a patient who suffers from a fast growing virus in India, called the ‘Censor Virus’ and a doctor, who is trying to help him deal with its epidemic. The doctor elaborates on various cases of censorship that have been observed across the nation to either conceal the truth or protect the image of certain dignitaries. The video concludes by giving away a simple yet impactful message that some bit of open mindedness and a basic sense of humor can help reduce genuine conversations from going under the scissors of censorship and make some actual difference.

Pocket Aces is one of the fastest growing digital entertainment companies in India today. The company conceptualizes, creates, and distributes engaging original content for millennial audiences through its channels Dice Media (sketches and web-series), FilterCopy (sharable and snackable short-form content), and Gobble (everything food). Pocket Aces has clocked over 120 million organic video views in the last 12 months, and is quickly becoming the digital company of choice for Indian advertisers. Pocket Aces uses data analytics extensively to create and analyze content, understand audiences, and optimize distribution and marketing spends.

Dice is the premium storytelling division of Pocket Aces. Since its inception in September 2015, it has created several experimental and edgy pieces of content such as the satirical sketch, Ban Ban, India’s first mockumentary series Not Fit, and most recently, an absurd-humour sketch titled Offline.