Web Talkies, the  fastest growing digital home entertainment brand in the country, is at the forefront of bringing art and innovation back to the commercial online entertainment space. Bidding adieu to the conventional medium of watching cinema, Web Talkies is on the verge of creating entertainment history by launching India’s first web-based feature film U Me Aur Ghar. The film revolves around a couple who is looking to buy a house in Mumbai. Along the way, they realize that a house hunt is more than just timely EMIs and romantic ideals. The film can be easily viewed on platforms such as YouTube, Hungama, and Web Talkies itself. 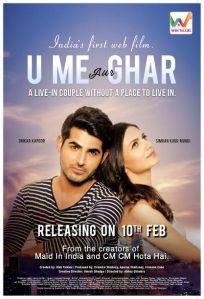 Releasing on the 10th Feb 2017, the film features, actors Omkar Kapoor of Pyar Ka Punchnama 2 fame, who is seen playing the role of Mittu aka Mithilesh, and Simran Kaur Mundi from the film  Kis Kisko Pyar Karoon?, with her character known as Chitti aka Chitranshi Mazumdar. U Me Aur Ghar will be of a duration of 1 hour  30 minutes.

Omkar Kapoor, whose first film Pyar ka Punchnama 2 did extremely well at the box-office, reminisced about his experience of working with the cast and crew. He said, “The unit at Web Talkies is extremely talented and it was a pleasure working with such a creative and diligent team. U Me Aur Ghar is probably one of the most hilarious and significant films of this generation, and I am overjoyed to be a part of it. The fact that it’s India’s first web-based feature film makes the experience all the more exhilarating.”

Simran Kaur Mundi, the promising new actress on the block who has impressed everyone with her talent said, “It is always exciting to be a part of something which can potentially be the first step towards bringing a massive change in entertainment consumption patterns of the entire country. The movie depicts the true experiences of numerous couples in Mumbai and the whole modern-day relationship story to the T. We hope audiences will relate to the film and support the great work Web Talkies is doing.”

Commenting on the film, Umesh Ghadge, Chief Creative Officer of Web Talkies, said, “From the days of Do Deewane sheher mein, aabudana dhundte hain from the film Gharonda, the theme of a couple searching for their very own abode in the midst of a bustling city has been explored time and again. With U Me Aur Ghar, we are revisiting this theme to see how modern-day dynamics affect the relationship between a couple and how the house represents a physical manifestation of their love for each other. Full of love, laughter, and relatable situations, the film is bound to be a hit with new-age viewers.”

The concept of a web-based feature film has not been previously attempted in the Indian entertainment industry. Commenting on what propelled Web Talkies to go the digital way with U Me Aur Ghar, Web Talkies Chairman and Managing Director Virendra Shahaney said, “Moving over from silver screens and TV screens, the digital screen is undoubtedly the new platform for the visual medium. As a result, we at Web Talkies felt that it was high time the Indian web got its very own feature-length film. The film caters to modern-day youth in big cities and the different insecurities and aspects of their lives. Hence, it seemed only feasible and logical to launch U Me Aur Gharon the web as it is the most popular way for the 18-35 age group to access their preferred forms of entertainment.  In an attempt to bring cinema to the comfort of one’s home, Web Talkies has enhanced its business while generating more audiences for the film, resulting in a win-win situation for all.”

U Me Aur Ghar,  with its stellar cast, great content and a generous sprinkling of humour, promises to be one-of the most anticipated films this year that will surely enhance the reputation the web platform has generated as the ultimate destination for new-age audiences.

Launched in July 2016, Web Talkies is a new brand of home entertainment. Conceived and co-founded by former head of fiction programming at Sony Entertainment Television Mr. Virendra Shahaney and backed by Promoter of the Siddhivinayak Group Mr. Kundan Dhake – Web Talkies aims to be amongst the top 5 players in Indian entertainment space in next two years. With its wide range of offerings like original content in fiction and non-fiction space, internationally successful licensed content, Indie content and AFPs, Web Talkies aims to emerge as the destination of choice for the current generation of global Indians.