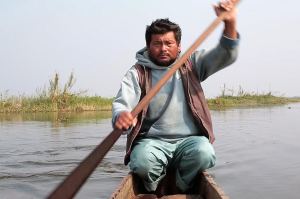 Haoban Paban Kumar’s debut feature in Manipuri language, Lady of the Lake will be having its European Premiere at the 67th Berlin International Film Festival, one of the world’s most celebrated film festivals to be held from 9-19 February 2017. It will be screened in the ‘International Forum of New Cinema’, which is considered to be the most daring section of the Berlinale featuring avant-garde, experimental works, political reportage and yet-to-be-discovered cinematic landscapes.

Lady of  the Lake starring real life couples Ningthoujam Sanatomba and Sagolsam Thambasang is a story about a depressed fisherman, Tomba who gets a gun accidentally. He marvels with the gun as his power of self-protection. He transforms himself to an assertive man who believes that guns can solve all problems.

The movie was shot entirely in Loktak Lake – the largest fresh water lake in North East India, which has a unique ecosystem, where people live on floating huts, built on floating biomass called Phumdis.

Directed and produced by Haoban Paban Kumar, ‘ Lady of the Lake’ made its World Premiere in the category Asian New Currents (Competition Section) at the 21st Busan International Film Festival 2016.

Delighted on Berlinale being the 11th Film Festival of his debut feature length movie, award-winning documentary filmmaker Haoban Paban Kumar says, “I have been making documentaries for the last 10-12 years. But when you do your first fiction feature film you are under lot of pressure. I am lucky that my film got its World Premiere in the Competition section of the prestigious 21st Busan International Film Festival 2016 and now it is having its European Premiere at the prestigious 67th Berlin International Film Festival 2017.”

Loktak Lake is a unique ecosystem where fishermen lived in huts built on floating biomasses. In 2011 the authorities, in the name of protecting serenity of the ecosystem, burnt down hundreds of these crumbly huts leaving thousands of fishermen homeless. Tomba, one of the victims, lives with a harrowing nightmare of looming displacement since then. He is haunted by seamless fear of further intervention of authorities that would make him homeless forever. Confined in his makeshift hut, Tomba senses the spirit of evil around, while his wife Thambalsang works hard to make their living. One fine morning Tomba accidentally finds a gun hidden within the biomass. He marvels with the gun as his power of self-protection. He transforms himself to an assertive man who is looking for an appropriate offense. One day an old lady who mysteriously wanders in the lake, knocks at his door in the middle of the night. Fearful Tomba, anticipating the lady as the spirit of all evils, chases her and commits an unintended crime.

Haobam Paban Kumar is one of the leading documentary filmmaker of the country. He has a 3 Year Post Graduate Diploma in Direction & Screnplaywriting from Satyajit Ray Film and Television Institute (SRFTI), Kolkata. Haobam came to limelight with the documentary AFSPA 1958 winning the International Jury and FIPRESCI award at the 9th Mumbai International Film Festival 2006. The film also won the ‘Swarna Kamal’ for the Best Documentary at the 56th National Film Awards 2008.

Some of his other notable films are Ngaihak Lambida, A Cry in the Dark, The First Leap, Mr India, Ruptured Spring and Nupishabi. Haobam has 5 National Film Awards and 6 Indian Panorama Selections to his credit. His last documentary Phum Shang won the prestigious Golden Conch for the Best Documentary at the 14th Mumbai International Film Festival 2016. Loktak Lairembee (Lady of the Lake) is his debut fiction feature film.