A little into Sathyan Anthikkad’s latest Malayalam film Jomonte Suvishengal we see a funny situation where an elderly pair is travelling by car, with the wife sitting in front next to the driver’s seat, while the husband is sitting at the back. Before you wonder what’s wrong, we see the car stopping to meet someone as the husband of the lady goes about surreptitiously taking a bribe from the person outside, handing over some legal document duly signed in return. That’s when we realize that lady is the mayor of the city (Thrissur), but she is more like a rubber stamp authority as the position has been reserved for women. It is in fact the husband (Innocent) who is actually running the show. The scene is handled humorously as Sathyan Anthikkad is usually known for, yet it conveys a reality that’s applicable not just to Kerala but across the country as well. It is for moments like these that one usually appreciates Sathyan Anthikkad and his films. 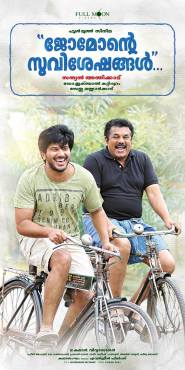 One of the few senior filmmakers who still continues to have a good track record in Malayalam cinema (he has been regularly making films since 1982, the year that saw the release of his first film Kurukkante Kalynam), his films continue to bring in the audience to the theatres despite an element of a predictable pattern of sorts that’s been emerging in his filmmaking style. His previous film Ennum Eppozhum (2015) was a moderate success and noticed for bringing the popular back of Mohanlal and Manju Warrier back on screen together. Now with Jomonte Suvishengal he has teamed up with Dulquer Salmaan for the first time, the promos and the songs having been appreciated in the run up to the release. Originally meant to be one of the major Christmas attractions of 2016, the film did get delayed by nearly a month thanks to the film industry strike in Kerala. But I guess all is well that ends well as the stalemate finally ended and Jomonte Suvishengal is the first of the Malayalam films to finally grace the theatres after a considerable gap.

The film begins in Thrissur as we see Vincent (Mukesh) and his family gather for the wedding of his younger daughter. Vincent is a self-made man who managed to successfully become one of the biggest businessmen in the city, dabbling in multiple fields all thanks to his hard work. He is assisted by his friend and long term associate Ravunni (Shivaji Guruvayoor). Vincent’s children are all well-educated and settled, except for Jomon (Dulquer Salmaan) who is still struggling to complete his MBA and is clearly unsure of what he wants to do in life. The first half is mostly a breeze, with enough doses of subtle humour and a lingering thought that perhaps the film would move on to a situation where Jomon gets to finally come of age and prove his worth as a son and a loyal member of the family. But till that there is plenty to appreciate, it’s nice to see how Jomon’s family is thrilled to see him take a liking to Catherine (Anupama Parameswaran), the daughter of an extremely rich NRI. Not only are they happy with his choice of girl, they are happy to help him succeed in his love as well. Just when you are settling down and actually enjoying the proceedings, things take a turn around the interval block.

Vincent faces unexpected issues on the business front and all his assets get attached by the financier from whom he had taken a huge loan. He escapes going to jail only thanks to Ravunni who sacrifices for his friend and takes the rap as Vincent’s benami. How does Jomon go on to handle the situation from thereon and bring a change not just in himself, but also in the life of Vincent as well is what the rest of the film is all about. And it is at the halfway mark that the film turns out to appear that it would go the Jacobinte Swargarajyam way and sadly that is exactly what happens, leading to a disappointing second half by and large. In place of Dubai and iron and steel exports as in case of Jacobinte Swargarajyam, here the action is shifted to Tiruppur and textile business. In both the films it was about a son having to come to terms with harsh realities of life and pick up stock from thereon, in the process going on pull out the family through the crisis.

While it is a little strange to see a film made in a similar template and release within months of the previous one, it is also disappointing to see a veteran like Sathyan Anthikkad take things a little too conveniently in the second half. As a result the situations which depict Jomon struggle, the ways by which he manages to slowly bring a turnaround in his fortune, the people he comes across are all nowhere as effective unlike in case of Jacobinte Swargarajyam. Also another factor that Sathyan Anthikkad has for some strange reason not bothered much is the length of the film. At 163 films and with the already present issues in the film, especially in the 2nd half, it would have made sense if Sathyan and editor K.Rajagopal had trimmed the film a bit, making it reasonably better on screen. Vidyasagar’s collaboration with Sathyan Anthikkad for the 3rd film in a row has thankfully worked, the songs are pleasant on the ears and “Nokki Nokki” (lyrics by Rafeeq Ahammed and vocals by Abhay Jodhapurkar and Merin Gregory) is the pick of the lot.

As with most Sathyan Anthikkad films the supporting cast is mostly remarkable, making the film engaging to a considerable extent. Vinu Mohan, Irshad, Muthumani , Indu Thampi etc play the usual family members of Vincent and Jomon, nothing spectacular as such about their work. Innocent is lively as usual and is still a treat to watch, while Shivaji Guruvayoor registers an impact too. Manobala’s character reminds us of many other similar characters that he has portrayed in Tamil films, but is effective. Jacob Gregory as the friend of Jomon is alright, playing something that comes to him naturally. Anupama Parameswaran plays Catherine, the ladylove of Jomon in the first half, only to disappear after a while. Aishwarya Rajesh who plays Vaidehi, the pillar of support to Jomon later on, appears in the second half and has a reasonably better screen time in comparison. It is a pleasure to watch Mukesh back in centre stage after a while and his scenes with Dulquer are one of the positives about the film. Dulquer on his part compliments Mukesh quite well and carries off the role in his own charming way. If only Iqbal Kuttipuram’s screenplay offered more scope to these wonderful actors it would have been even better.

Ultimately Jomonte Suvishengal is watchable for Mukesh and Dulquer Salmaan as well as a reasonably engaging first half. It’s a disappointment from Sathyan Anthikkad though as he strangely has come up with a clone of a recent Malayalam hit, hope he comes up with something way better with his next film.

One thought on “Jomonte Suvishengal Movie Review: Return of the Prodigal Son”