Falling in love is a magical experience, especially when it happens for the first time. Emotions and feelings you were unaware of engulf you as you try to make sense of an experience that may be difficult to describe. A certain joy is derived as you strive to catch a glimpse of your beloved one, make your presence felt and make them feel special, with the hope that your feelings get reciprocated. Such an experience often happens before we are exposed to the harsh realities of the world, which makes it seem so pristine and beautiful. 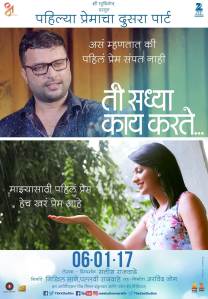 Yet there is a possibility of your feelings not being reciprocated or requited, which may create a void in your heart. And even as we grow old, the mind often thinks about this unrequited love. Even if you are with someone you truly love and are happy being with them, your thoughts often linger around that unfulfilled first love. What does one do if life offers you a chance to meet your first love once again? Do you jump at the opportunity or let time heal your wounds?

Director Satish Rajwade’s Ti Saddhya Kay Karte narrates one such story of unrequited love. Anurag (played by Hruditya Rajwade and later by Abhinay Berde and Ankush Chaudhari) falls for Tanvi (played by Nirmoyee Agnihotri and later by Aarya Ambekar and Tejashri Pradhan) when he sees her for the first time. The two eventually grow up to be best friends. Even as various women enter and exit Anurag’s life, his feelings for Tanvi remain the same. An altercation leads to Tanvi parting ways with Anurag and they never meet again. Several years later, as life presents Anurag an opportunity to reconnect with Tanvi, he explores the possibilities of the same.

Using flashbacks and an impressive voiceover by Chaudhary, Rajwade and writer Manaswi Lata Ravindra transport us back to the era that was devoid of the omnipresence of social media and technology. He recreates this era with the right amount of subtlety and detail and brings out some beautiful nuances of the bygone times, though it may remind you of other similarly themed Marathi films of recent times.

The flashback which is set in a modest housing society finely captures the intricate details of the Indian middle class. Be it the neighbours gathering at one’s house to watch the latest film on a newly purchased Video Cassette Player (the film being Salman Khan’s Maine Pyar Kiya in this case), sending letters to express your feelings to your crush, the neighbourhood kids creating a ruckus while playing cricket in the colony, the building terrace which becomes a secret haven for varied things such as sharing secrets with your friends or having alcohol away from the prying eyes of parents, the manner in which these moments are captured bring a smile to your face.

The journey of young Anurag and Tanvi from being strangers to becoming good friends and ultimately close confidantes is treated with adequate depth and detail. But the rift that leads to Tanvi and Anurag drifting apart is bereft of this detail and therefore seems abrupt.

Rajwade and Ravindra don’t forget to infuse the film with everyday struggles that await the protagonist even as he is enjoying the first flush of love and later the attention of several other women in college. One such moment occurs when Anurag’s father is admitted to the hospital following a heart attack. It captures Anurag’s reaction immaculately as he realizes there’s more to life than falling in love and growing up is an inevitable part of our lives.

As the film nears intermission, one is ready to immerse themselves in this realistic yet delightful setting of the film. Yet this experience remains somewhat unrealized as the women protagonists in the film are not fleshed out well. From the outset the film dwells on the feelings Anurag has for Tanvi and her thoughts that linger in his mind even as he goes through the various stages of his life. It also dwells on the other women he meets later in his his life such as Mohini  (Isha Phadke) – the resident college heartthrob, Anjali – a good friend of Tanvi whom Anurag feels would be an ideal life partner and Anurag’s wife Radhika (Urmila Kanitkar Kothare wasted in an underwritten role). The climax is also devoid of a serious conflict and the complications that may arise due to such a complex situation.

One never really gets to know the women’s side of the story, the emotional upheavals, dilemmas they maybe facing especially Anjali as Anurag keeps diverting his attention between her and Tanvi. On a similar note, one wonders if Rajwade had chosen to narrate the story from Tanvi’s point of view (much in the vein of the Malayalam romcom Ohm Shanthi Oshanaa), would it have made for a better and more interesting story?

Ankush Chaudhari is believable as a married and well settled man trying to reconnect with the first love of his life, before giving it a closure. Tejashri Pradhan has a charming presence and plays her part well, though she could have benefited from a better written role. Veteran actors Sanjay Mone, Sukanya Kulkarni as Anurag’s parents are competent as always and so is Tushar Dalvi who is cast as Tanvi’s father. Debutants Abhinay Berde and Aarya Ambekar perform fairly well. Hruditya Rajwade and Nirmoyee Agnihotri are endearing in their portrayal of the youngest versions the protagonists.

Backed by hummable songs, some delightful and heartfelt moments,Ti Saddhya Kay Karte makes for a good watch. Yet one can’t shrug the feeling that had the makers chosen to explore the other aspects of this seemingly complex tale especially towards the finale, the film would have been a notch above the other love stories.