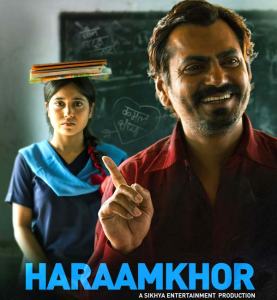 Haraamkhor’ is a forthcoming Hindi film directed by Shlok Sharma.The film stars Nawazuddin Siddiqui and Shweta Tripathi. The film which has been long ready and been noticed in the festival circuit is now finally being released by Indian Film Studios on 13th January, 2017. Produced by Guneet Monga, Feroze Alameer, Anurag Kashyap and Achin Jain, Jasleen Royal is the music composer of the film while Siddarth Diwan is the DOP and Kratika Adhikari is the editor. The film was shot in 16 days only.In April 2015, a FIR was registered against director Shlok Sharma on a complaint by Balbharati, Maharashtra’s textbook bureau, objecting to striking similarities between its logo and promotion scenes from Haraamkhor. Haraamkhor was premiered in 15th annual New York Indian Film Festival (NYIFF) and Indian Film Festival of Los Angeles (IFFLA). Nawazuddin Siddiqui received the Best Actor award for the film at the New York Indian Film Festival.

Plot- An unlikely love triangle unfolds when married professor, Shyam (Nawazuddin Siddiqui), has an illicit affair with his student, Sandhya (Shweta Tripathi), who in turn is trying to be wooed by her classmate Kamal (Master Irfan Khan). Set in a small town in Madhya Pradesh, Haraamkhor is a prohibited / twisted love story witnessed through the eyes of two adolescents.