Haven’t you heard of men who during their college days and perhaps even much later led a wild, carefree life, only to give it all up and sober down post their wedding? Needless to say that not all of them change by choice, some do it due to fear, some due to necessity and some simply because they just do not have any choice. In fact the lives of these men pre and post wedding can be seen in total contrast of each other. Oh! Don’t worry this is not an article to talk of why not to get married, or to discuss the ill effects of doing so. After all one cannot generalize things on the basis of some case studies. This is indeed a film review but then it’s a take on a film which set me thinking on these lines, even making me think of people I know who have gone through or are going through such a phase. 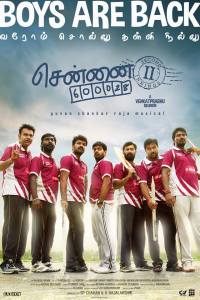 Yes I know that Chennai 600028 is a film that had received a lot of love and adulation, propelling director Venkat Prabhu to instant stardom, something that he had incidentally not managed before his transition from acting to writing and direction. In fact so popular is the film and strong is the appreciation for it over the years that with an exception of perhaps his biggest vehicle so far, Mankatha almost every other film of his has been compared with his debut film, Chennai 600028 and considered not to be close to it in terms of being a totally satisfying entertainer. After the extremely disappointing Massu Engira Masilamani (2015) it was not at all surprising to see Venkat Prabhu announcing that he would be coming up next with the sequel to Chennai 600028. And considering that the film went on the floors only in April this year it is quite commendable to see that the film is already in theatres now. But nothing could have prepared me for the kind of response I saw during my show over the weekend in my neighbourhood multiplex.

An afternoon show for a Tamil film in Mumbai with no big stars is not something that one usually gets to witness. Add to it the crowd roaring with joy right from the very beginning and acknowledging their love for the gang of boys and it was a sight to behold. At the time of writing this I am delighted to acknowledge that the same multiplex has added 3 more shows of the film, what more does one need in the form of acknowledgement of the film being accepted by the audience. What made Chennai 600028 special you could ask and I would be happy to answer that indeed. Is it because it’s a sports based film and that too cricket which is a National topic of interest? Of course not because we have had many sports especially cricket based films both before and after the release of Chennai 600028. Is it because it’s devoted to gully cricket then? Something that all of us have probably indulged in at some time or the other? Well yes to an extent. Is it due to the fact that it’s a film revolving around youngsters, a coming of age film of sorts? Well yes to an extent again.

But more than all this, what made the film unique is that it is a sports comedy film and a total entertainer, a space that’s not really been explored properly in India. Most sports based films in India are either biopics and/or the story of an underdog achieving success while here the emphasis is not on the game alone. For sure the film has a lot of screen time devoted to cricket, but there’s more to it. It’s also about friendship and the celebration of friendship in fact. Perhaps that’s why the film is special and thankfully Venkat Prabhu has ensured that he does not deviate from this background as far as the sequel is concerned. If Chennai 600028 saw us getting introduced to the boys who constitute Chennai Sharks and their rivalry with Royapuram Rockers, then Chennai 600028 II: Second Innings is again about the boys from the Sharks team and what they are up to 9 years since we got to know them.

The boys have all turned family men mostly, with the exception of Seenu (Premgi), Aravind (Aravind Akash) and Raghu (Jai). Gopi (Vijay Vasanth) is now the captain of the Sharks team and the only one still actively playing cricket; the others have all drifted away from the game for various reasons, while Aravind is missing in action. Raghu is about to get married to Anuradha (Sana Althaf) and the friends travel together to Theni for the wedding along with their families. Over there they also end up meeting Aravind who is now playing cricket locally as well as Maruthapandi (Vaibhav), the local biggie and someone who is hell bent on winning every cricket tournament by hook or crook. What happens when the boys get back together is what we get to see in the film as Venkat Prabhu takes us through a fun ride which has doses of friendship, cricket, emotion and most importantly comedy in the right proportion. 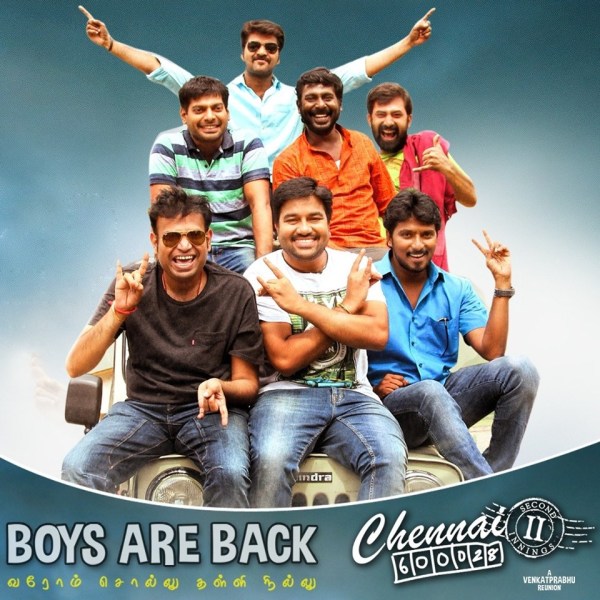 Making a sequel to an already successful film by itself is no easy task, after all the expectations are huge and fulfilling the same is indeed difficult. And the complexity only increases if the original in question was a film with a multi star cast with many memorable characters. More often than not it becomes difficult to get the same star cast back together, often filmmakers tend to bump off one or more characters or replace them with new characters, a ploy that usually does not go well with the audience. Here Venkat Prabhu has done well by retaining almost all the essential characters of Chennai 600028 and the few new characters that get introduced are more a function of the demand of the plot and nothing else. And though the characters might have grown older in age and their appearance might have changed a bit, their quirkiness in a way has been retained, making us root for them even today.

For example Seenu can’t still really play cricket well, Manohar anna (Ilavarasu) continues to back the boys and is their go to man in crisis situations and Karthik (Shiva) remains a prankster even if he does not admit it. The writing by Venkat Prabhu is spot on and he is assisted with some additional dialogues by K.Chandru and Ezhilarasu Gunasekaran, a lot of the funny dialogues going to Karthik and Seenu, not to forget Badava Gopi who returns as the commentator. The new entrants like OK (Mahat) in a getup reminding us of Vikram from Pithamagan and Maruthupandi, the haughty village biggie are well written characters and get to register an impact. Just when you are wondering if the film is getting a little too emotional for comfort, Venkat Prabhu manages to get us hooked back with what else but cricket, even bringing back the Bad Boys cricket team as well in the process. Despite a run time of around 155 minutes the film never really feels stretched and editor Praveen K.L certainly deserves credit for the same. 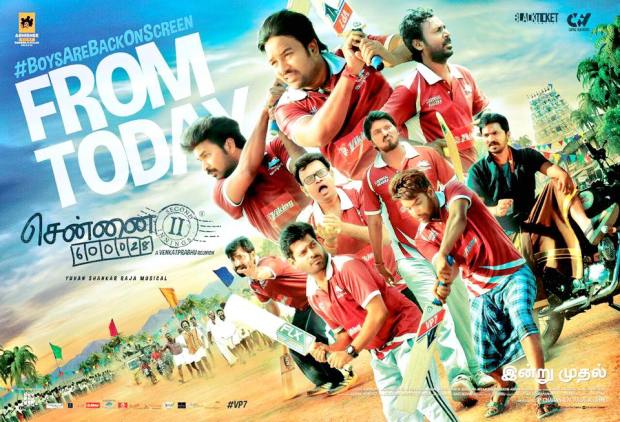 Perhaps the only aspect that is indeed a disappointment with the sequel is the music by Yuvan Shankar Raja and that’s quite a surprise because the songs of Chennai 600028 are still quite popular even today. The only song that works this time around is “Soppanasundari” (lyrics by Venkat Prabhu, vocals by Karthik Raja, Venkat Prabhu, Premgi Amaran and Yuvan Shankar Raja) and even that is not in the league of “Saroja Saaman Nikalo” and “Jalsa” from the previous film. Talking of performances it’s a team effort and almost everyone is pitch perfect essaying their various characters, though Shiva, Jai and Premji get noticed a little more. The gentle but firm way of taking potshots at YouTube based film Tamil film critics and the way they function is something that one cannot avoid noticing. Venkat Prabhu even manages to get one of these “critics” to feature in the film, scoring a sixer in the process. Eventually it is quite commendable of Venkat Prabhu to come back with a worthy sequel to the film that actually spring boarded his career as a filmmaker.

Chennai 28 II: Second Innings falls a trifle short of the original but that’s not something that you should worry about at all. It is a fun entertainer with a good sprinkling of all the ingredients needed for an enjoyable time at the cinemas. Go watch the film and welcome the boys as they are here to rock all over again.