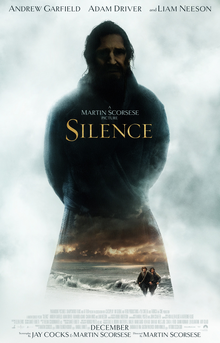 Silence is an upcoming American historical drama film directed by Martin Scorsese and written by Jay Cocks and Scorsese, based upon the 1966 novel of the same name by Shūsaku Endō. Shot entirely in Taipei, Taiwan, the film features Andrew Garfield, Adam Driver, Liam Neeson, Tadanobu Asano, and Ciarán Hinds. After a World premiere at the Vatican on November 29th Silence is expected to release in U.S on December 23rd and expand to the rest of the World in January 2017.

Plot– In the seventeenth century, two Portuguese Jesuit priests (Andrew Garfield and Adam Driver) face violence and persecution when they travel to Japan to locate their mentor (Liam Neeson) who had committed apostasy after being tortured. The story takes place in the time of Kakure Kirishitan (“Hidden Christians”) that followed the defeat of the Shimabara Rebellion (1637–38) of Japanese Roman Catholics against the Tokugawa shogunate.