Underlining its commitment to bringing forth stories with a difference, Web Talkies, the latest digital home entertainment brand in the country,has announced its latest web series,CM CM Hota Hai. The series chronicles the struggles and hurdles faced by an honest politician working for the benefit of the people, as he pursues the vision of making the country a better place to live in. 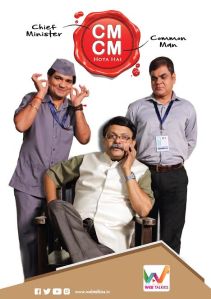 Set to be launched on November  21, CM CM Hota Hai is the story of Rao Saab, played by veteran actor Atul Srivastav –a simple, honest, and humble Mumbaikar who lives with his family comprising his wife, daughter and son. Through twists of fate, this soft-spoken, decent man gets thrust into the public limelight as a potential leader and eventually becomes the CM of Maharashtra.With no knowledge of how politics works, Rao Saab tries to uphold his oath to protect and serve his people with honesty and integrity. With a new episode released every fortnight, CM CM Hota Hai will be available on Web Talkies’ platform as well as YouTube, Facebook, DailyMotion, Veblr, Nexgtv, Vimeo. It will also feature actors Praveen Hingonia & Devender Chaudhary.

Speaking on the announcement, Virendra Shahaney, Chairman and Managing Director Web Talkies, said, “There are several political satires which focus on the plight of the common people and the mistakes of political leaders.However, it is less often that we see a second thought given to the ones actually managing a public office and to the weight of expectations upon their shoulders. Our latest web series, CM CM Hota Hai, highlights the tribulations that these men and women working for the public face. We are confident that, with its fresh concept and novel approach, the show will entertain viewers while also delivering an important social message to them.”

With the show capturing all the twists and turns of being in the ‘hot seat’, CM CM Hota Hai promises to be another delightful addition to the diverse and differentiated entertainment content that Web Talkies offers. So would Rao Saab successfully navigate the political labyrinth and deal with his high-pressure situation satisfactorily, or will he scald himself in the heat of public attention and constant scrutiny? Log on to Web Talkies and find out!

Launched in July 2016, Web Talkies is a new brand of home entertainment. Conceived and co-founded by the former head of fiction programming at Sony Entertainment Television Mr. Virendra Shahaney and backed by Promoter of the Siddhivinayak Group Mr. Kundan Dhake – Web Talkies aims to be amongst the top 5 players in Indian entertainment space in next two years. With its wide range of offerings like original content in fiction and non-fiction space, internationally successful licensed content, Indie content and AFPs, Web Talkies aims to emerge as the destination of choice for the current generation of global Indians.