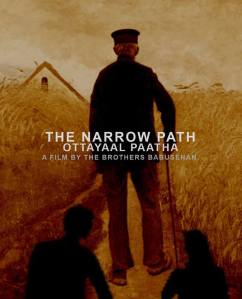 Brothers Satish Babusenan and Santosh Babusenan who came out of a self imposed hibernation to get back to filmmaking,ended up getting into trouble with the CBFC thanks to their Malayalam film “Chaayam Poosiya Veedu” (The Painted House) in 2015. After a battle with the court which saw the film being cleared without any cuts they have gone on to make their next film, Ottayaal Paatha (The Narrow Path) which recently won the Silver Gateway Award at the JIO MAMI 18th Mumbai Film Festival. Ottayaal Paatha is now competing under the International Competition section at the prestigious 38th Cairo International Film Festival. The film features a relatively unknown cast comprising of Kaladharan, Sarath Sabha, Krishnapriya and Prajusha.

The film is about a father and son who live in the slum. The movie starts one morning and ends by day break the next. The father Vikraman is a retired cleaner in the city corporation and his legs are now partly paralysed as a result of uncontrolled diabetes. Restricted largely to his bed and wheel chair, he is looked after by his unemployed software engineer son, Akhil. Both of them have different ways of looking at life and have a strange relationship which gets tested in ways unknown and unexpected to both of them all of a sudden.