Are emotions inherently adolescent? Karan Johar thinks so, as he gets Ranbir Kapoor – who has built his career playing the man-child needing a relationship to grow up – to play his surrogate. He names his character Ayan – of course after his still-growing-up protege Ayan Mukherjee (director of 2 movies starring Ranbir getting life lessons from sorted women) – who is an adolescent navigating a world of adult relationships, finding it impossible to deal with his one-sided love. In the process of making Ayan realise “That’s life buddy!!!”, Karan Johar comes up with a movie which is essentially a distillation of all Imtiaz Ali movies into a tremendously clear minded closure to unrequited love and everything that comes along with it.

One of the first things that jump out at you are the constant references, explicit as well as implicit, to the old Hindi movies. It parodies the melodramatic dialogues, but also very easily falls back to them while talking about anything serious related to a relationship. More often than not it refers to love as ‘mohabbat’. I will leave this thread right here, because whatever needs to be said has been said in a comprehensive manner by Baradwaj Rangan in his review titled – “Ae Dil Hai Mushkil”… A satisfying bridge between Hindi cinema and Bollywood.

The Bollywood (multiplex era) that Mr. Rangan is talking about gave rise to the beta male as the hero. We got a transition from the self-righteous and doer SRK to an unsure, confused lover Ranbir. This new hero has embraced his feminine side completely. He needs the woman to take control. He needs to be consoled and mothered. He has become so much dependent on his woman emotionally, that he is in no way capable of providing any emotional support to anyone else keeping aside his ‘feelings’. Ayan’s outburst at Alizeh’s (Anushka Sharma) wedding is an ugly manifestation of this new hero. He is so much lost in his own emotions that he is not able to see how he is ruining his best friend’s wedding, by making it all about himself on the most important day of his best friend. It is one of the best scenes of the movie, where we so clearly empathise with Ranbir while clearly seeing the devastation he is leaving behind. I so want to invoke ‘Raanjhana’ here, but I want to watch it once to be sure I’m comparing apples to apples. I don’t know whether I’ve changed, or the movies are different, but where Anand Rai invokes strong reactions for and against his male/female protagonist, Karan Johar asks for empathy in a very non-judgmental fashion.

Another millennial male issue is the friend-zone. With the increasing mingling of boys and girls in the urban landscape, this issue is right up there with the most serious of issues (lol). Boys are finding it increasingly difficult to make sense of the non-romantic construct of a relationship which involves a guy and a girl. Is this really a grave issue worth exploring for a couple of hours of movie time? Karan Johan feels so strongly about this that he pushes the limits, gives the female lead a terminal illness and then asks her, “Now, that you are dying and I’m the only one besides you, can I now come out of my friend zone? Can you now relent and love me like a man? You’ve nothing to lose!” It gets so difficult for the guy to accept the fact that ‘She’s just not that into you’. All this sounded hysterically funny to me at a level, but also incredibly honest and tragic too. Ayan rages, “What else do I have to do to get you to love me in that way?” Alizeh explains in the most simple terms, “I love you. This is more than anything for me in the world, even more than my own family. You are my family. But I can’t sleep with you because I’m dying.” But Ayan still caught up in his world retorts, “I don’t understand this!” At that moment you so clearly see the disconnect, and it makes you sad. Its just sad, that an insecurity so naïve is yet so strong to rob them of peace. KJo in a best possible way falls back on the Bollywood trope of airport climax to give his characters the traditional romantic catharsis.

ADHM welcomes a reinvented Karan Johar, more closer to his off-screen persona. It is very evident he has imbibed a lot from his peers like Anurag, Zoya and also from the millennial filmmakers working under Dharma, especially Shakun Batra. The way he fires up the screen with an EDM version of ‘Aaj jaane ki zid na karo’ shows the two worlds coming together. The romantic yearning of the actual song, sexualized completely for today’s bar hopping youngsters. It represents in a shell exactly what he is going for in this movie. 2 young ones, hook up in a club, make out, bar hop. Its all sex and fun. But only when they re-enact old Bollywood songs, they get mushy, cuddle up and reflect on their relationship. That might be KJo imposing himself, or planting a rhetoric from a generation back. This also brings me to a technicality. In the movie, Ranbir wakes up to the 80’s chartbuster ‘Taaki o Taaki’. In reality, KJo himself grew on 80s songs, but his character Ayan should be dancing to a 90’s Govinda song like ‘Kisi Disco mein jaaye’. This might seem a very trivial thing, but it clearly shows that this is a story of millennial characters written by someone older, old enough to understand, but not too old to give a damn.

Through all of this, KJo’s musical instincts and aesthetics are still intact. The way he weaves in 2 back to back songs with such fluidity is a quality seriously lacking in today’s mainstream film making. The celebratory bubblegum track ‘Cutiepie!’ transitions into the emotional ‘Channa Mereya’ with a tonal clarity rare in today’s movies. The transition into the title track with a tracking shot moving away from a broken down Ayan is the pure soul. His visual aesthetics are all driven by what looks good. There won’t be a single person, a single thing in the frame that doesn’t look good. He would rather opt for filthy rich NRI leads robbing us of identification, than setting in India to gain some audience identification and risk introducing a pothole or a poor person in the frame.

For the very same reason, he goes with a decked up gorgeous Aishwarya Rai as an older urdu poetess rather than someone like Vidya Balan or Tabu who would’ve been the natural choices. But looks takes precedence. I don’t mean just the face, I mean everything. Only then there is a possibility of love. SRK not falling for Kajol in KKHH was just that she didn’t look good in those track suits.  This obsession with the look aesthetic robs ADHM of any nuance in Ayan’s relationship with Saba (Aishwarya Rai Bachchan). She is so gorgeous, and he is so young and charming. They want just to keep doing it. That’s pretty much what comes across. KJo does try to give us somethings to savour, like Saba’s poetry giving means to Ayan to let out, Saba shushing him in a club and let eyes do the talking. But eventually, Saba remains a placeholder ( the more elaborate version of Ali – Fawad’s character) for Ayan to rebound. Her exit though is very poetic. She presents herself as a reflection of Ayan himself in one-sided love. Ayan sees her as Alizeh sees him. It’s frightening for him to glimpse how loveless Alizeh might be feeling during his outburst. 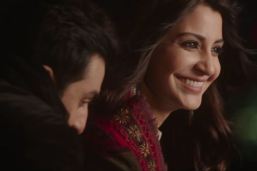 Ranbir Kapoor is a great actor. Anushka Sharma is even a better actor, because its almost like I can take her for granted. I never feel compelled to talk about her. She is just there, slipping in naturally without any acting. Ranbir though gets author backed roles regularly, but gets shortchanged yet again in a boy-to-man transition role. He just seems to never grow up on screen. It’s after the final credits he grows up. He has embraced the beta male role so fearlessly. But his best scenes are when his dormant alpha explodes with violence. He makes it feel real, he makes it feel like us, he makes us realize there is lot of violence in all of us waiting to be unleashed. And we want movie characters to express and explode the way we don’t in real life, because that’s what keeping the peace.

Contributors – Long phone calls and chatting with the below people helped me articulate my thoughts. I have generously borrowed their thoughts and words in the above write-up.

millennial: a person reaching young adulthood around the year 2000; a Generation Yer.