When Mainak and I met in the summer of 2014 for one of our casual lunches, I arrived at the little hole-in-the-wall Nepali joint with the biggest question on my mind: will I eat the aloo-puri or the mixed vegetable curry with rice? Both were so damn delicious, it was always tough to choose one over the other. Moreover, those were the only two vegetarian dishes, so not like I had much choice. It was still a puzzling one though. When I left the little hole-in-the-wall Nepali joint, however, I had an even bigger question on my mind: what the hell’s wrong with Mainak, and why does he want to make a movie about two people talking to each other in a car about life? 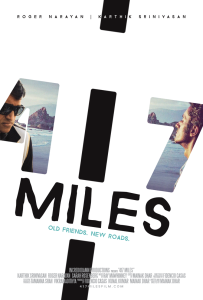 He had had an idea about a road trip movie for some time, which had been about a couple driving to Sundance, but it wouldn’t have been feasible to pull something off at that scale. So he’d written up a buddy road trip movie instead and pitched it to me. When he mentioned the fact that it was written in a month, and was only 40 pages long, I may very well have launched projectiles of aloo-puri at him from laughing so hard. After all, he said he wanted to make it a feature, and the only thing going through my mind was that’s neither a short, nor a feature — dhobi ka kutta, na ghar ka, na ghaat ka. He said he wanted to throw in heavy amounts of improv and that we were going to shoot it in the two words I dread the most: guerilla style.
The last time I had shot something guerilla style, I had been made to sit on the sidewalk in the heart of Washington DC with 3 other brown dudes, showing my ID to police officers, while people walked by, eyeing us suspiciously. I was quite content with my life to not put myself through that again — need I say, with 3 more brown dudes. But somehow, and this part of it is still a blur, I agreed. I suppose knowing how isolated the Pacific Coast Highway is helped, and realizing that we’d be shooting majority of the movie in a car was a big part of it.
And so we did. I can’t say I was ever fully convinced, but as the days went by, I could see the amount of planning being put into the process by the entire team, and I have no choice but to admit, I was taken aback with Mainak’s dedication. From holding auditions to making multiple road trips up and down the PCH for recce, he had it all mapped out. From the chill, laid-back dude I had known all this time to being a man with a plan, I was starting to feel good as we approached the shoot.
The first scenes were probably the most nerve-wrecking to shoot. I had just landed at the San Francisco airport, and Mainak and Roger (the other actor) had already reached before me along with Fido (our DP). As soon as I landed, they picked me up, and we would start shooting Srinivas’ (played by Roger) arrival to the US. Heart in mouth. Post-9/11. 3 brown dudes in a car, filming just outside the airport, where there is a constant presence of heavy security and police. But with 2 takes, we nailed it and kept going.

The rest of the weekend was filled with other such adventures (I use the term rather loosely considering I was nervous for a good chunk of it). We’d be rigging up the car with several camera mounts and filming along stretches of the PCH, inside and around a lighthouse, at gorgeous, scenic, and completely desolate beaches, not to mention the incredible Monterey Bay Aquarium. When we made stops to re-rig the camera mounts, people would come up to us in awe (some even took pictures with us) asking us about what we’re doing and how they can watch the film. Hell, we even had a devout Christian come up to us and start talking to us about why we should learn by the way of the Lord. Instead of dismissing him, we even made him a part of our film!
With 2-3 more shoot dates in LA after our initial weekend shoot, we had a feature film in the cans, and we had done it in less than 5 days. And now it plays at MAMI on Monday, October 24th at 2:30pm at PVR Phoenix in Lower Parel.
I’m sorry – I can’t believe I’m saying that. I’ll need to say it again to believe it.
It’s playing at MAMI.
MAMI.
Nope, still having a hard time believing it.
Here’s the teaser of the film-
For more information about the film you can check out the following-