The Jio MAMI Mumbai Film Festival with Star, in its 18th edition celebrates Marathi cinema with the launch of its new segment, Marathi Talkies. The programme will showcase Marathi films through the day at PVR, Lower Parel on October 25, 2016. The film line up has been curated by renowned Marathi film critic, Amol Parchure. The festival will launch Marathi Talkies with a bang as it gears up for the World Premiere of Ventilator, the first film produced by National Award winning actor Priyanka Chopra. 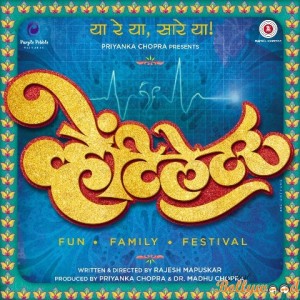 ‘Ventilator’ is written and directed by Ferrari ki Sawari director, Rajesh Mapuskar and is produced in association with Magic Pictures. The film revolves around an ailing senior member of a family who is being put on the ventilator just days before the popular Ganpati festival leading to varied degrees of speculation and panic amongst the large coastal clan he belongs to. What ensues is funny, ironical and deeply moving. The first poster of the movie was unveiled by Priyanka Chopra in September 2016.

Curator of Marathi Talkies, Amol Parchure said, “In recent years, Marathi cinema has seen a boom in viewership in India, thanks to the makeover the industry underwent in 2010. We have seen some unconventional and splendid film take over the world cinema stage and win hearts across countries, breaking the language barrier. Film festivals MAMI have also proven beneficial to the industry as they provide a platform for progressive Marathi cinema to showcase itself. Do not miss a chance to watch these outstanding films on the big screen.”

A staunch supporter of regional cinema, Actor and Producer, Riteish Deshmukh said, “I am pleased that MAMI continues to support regional cinema and this year, have dedicated a day to Marathi films. It is because of the platform provided by international film festivals that regional cinema is growing faster than ever.”

Jio MAMI with Star, Festival Director, Anupama Chopra said, “Marathi cinema has always been an integral part of MAMI.  With Marathi Talkies, we are creating a special showcase for great Marathi cinema.  We hope that this will help to serve both the Marathi film industry and viewers.”

Other films to be showcased this year at Marathi Talkies are Vakratunda Mahakaya, Bioscope and Rajwade & Sons along with Ventilator.

Jio MAMI with Star, in its previous editions has greatly extended its support to the Marathi cinema by screening National Film Award winner,Court and A Calling (Kaul).