The screening was attending by Director Richie Mehta and Executive Producer of the film, Anurag Kashyap

Jio MAMI Film Club with Star yesterday, September 20, premiered Google’s ‘India in a Day’ at PVR Icon, Versova. Directed by critically acclaimed director, Richie Mehta and executive produced by Anurag Kashyap and Ridley Scott, the film received an overwhelming response from the audience. The premiere was attended by renowned personalities like Anurag Kashyap, Kiran Rao, Neeraj Ghaywan, Nagesh Kukunoor, Javed Jaffrey, producer of the film, Cassandra Sigsgaard and the members of MAMI Film Club. The premiere was also attended by guests from various parts of India whose footage had been selected for ‘India in a Day’. 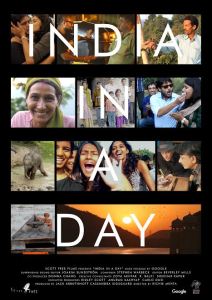 ‘India in a Day’ was also premiered at Toronto International Film Festival this year and was selected for the next generation of film lovers by the TIFF Next Wave Committee. The film that is entirely made from crowd sourced footage will be released throughout India on 23rd September, 2016 by Dekho.

Director Richie Mehta said, “I am very excited to have India in a Day premiere in India at the MAMI Film Club. I’ve played at MAMI before and I know that it is one of the best festivals and for them to be involved in this is an ideal place for the film like India in a Day which is shot by everyone around India.”

Executive Producer Anurag Kashyap said, “I am very happy that MAMI Film Club picked up India in a Day. This is the best platform where it could have premiered. This is where film enthusiasts come, filmmakers come and MAMI is a point where all of them converge.”

Jio MAMI with Star, Festival Chairperson, Kiran Rao said, “As a film, India in a Day has broken barriers. I think we were a good partner for them and that is why they decided to premiere the film at the MAMI Film Club. We are committed to bring the best of cinema and we are very happy that India in a Day premiered with us.”

Google Inc. Brand Lead, Samit Malkani said, “We received over 16000 clips and over 365 hours of footage. I believe this makes it India’s largest crowd-sourced project ever.”

Jio MAMI with Star, Creative Director, Smriti Kiran said, “This is our film club’s second India premiere in a row. Mumbai was rained out today but MAMI Film Club members still came out to watch it which is so heartening. Google and Scott Free had faith in us to entrust us with India in a Day’s first screening in the country. The Q&A session conducted by filmmaker Neeraj Ghaywan with director Richie Mehta and executive producer Anurag Kashyap was icing on the cake.”

Google received footage from all over India. The resulting film offers a remarkable insight into the lives, loves, fears and hopes of people living in India today.