This has been an unusually long dry spell for an average Bollywood lover. Barring an intermittently funny Happy Bhag Jayegi, there has hardly been any film in the last month or so that has managed to register its presence in our minds – forget about leaving an impression. Midst of all the blues, comes director Aniruddha Roy Chowdhury’s Pink – a film with an odd title but an intriguing enough trailer to raise a few hopes. And by the end of its runtime, the film not just exceeds your hopes but also reinstates your faith in the good, old Bollywood and its ability to churn out meaningful, powerful stories.

On the face of it, Pink does not have a unique plot or a mind-boggling twist in its tale that so many thrillers desperately try to infuse. Rather the film solely and beautifully relies on the tension built around a solitary incident involving three boys and three girls who meet up at a rock concert and end up in an ugly brawl at a resort later. The director smartly conceals the real turn of events till the very end (wait for the end credits to roll) and lets the viewers form their opinions basis the accusations and counter accusations leveled by parties involved in the incident. While the film stays ‘neutral’ in its treatment of the case per say but during the course of its runtime it drives home some strong and pertinent points about the rampant misogyny and prejudice against women even in a supposedly modern city like Delhi. 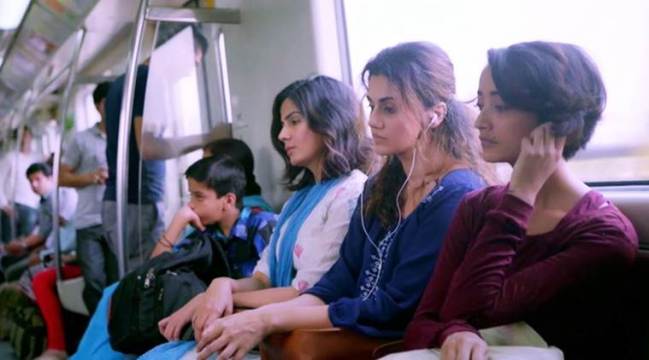 The daily dose of stare and scare that an average woman faces has been chillingly depicted in the film that mostly stays clear of the melodrama and rhetoric. Taapsee Pannu, Kirti Kulhari and Andrea Tariang playing Meenal, Falak and Andrea – the three working women sharing a flat in a uptown Delhi locality, bring to life the lives of so many young women who stay independently, much to the misplaced curiosity and unfounded scrutiny of the society at large. From a neighboring uncle who stares at their bras in the balcony and counts the number of male visitors to an observant aunty who holds the opinion that things are bound to go wrong when women live alone – Pink is resplendent with creepy, naked portrayal of society’s deeply misogynist and hypocritical attitude towards women who even remotely begin to assert themselves.

The three female leads are perfectly cast in their roles that require both strength and emotional vulnerability. Taapsee Pannu as the woman facing trial for assaulting a well-educated, influential man (Angad Bedi) is in top form – reminding us of her immense talent and natural ability to emote. Kirti Kulhari emerges as the most nuanced performer of the troika and you curse the filmdom for grievously underutilizing her acting chops. And it’s a huge relief to see Bollywood casting a girl from the Northeast in a mainstream character and Andrea Tairang totally lives up to her billing.

But it’s not just the leading ladies but the entire battery of the carefully chosen support cast that makes Pink and its characters so believable and real. The female cop investigating the case, the boys playing the antagonists, the scathing prosecution lawyer (Piyush Mishra) and the considerate judge (Dhritiman Chatterjee) – they are all characters cast in flesh and blood, making Pink look like an ordeal you wish none of your female friends/relatives have to ever go through.

Standing tall midst of this excellent cast is Amitabh Bachchan as a retired and ill lawyer who comes to the rescue of the beleaguered girls. He uses his baritone and deep pockets of acting to come up with a worthy performance in a character that has its share of loose ends. Some fine writing (Ritesh Shah) helps Bachchan deliver a few dramatic courtroom sequences but the same writing fails to sketch his character to its full glory. There is little explanation behind the sequence involving the lawyer’s ill wife or some of his histrionics that look somewhat caricature-ish.

While the writer and director mostly keep you hooked with their well-intentioned portrayal of women-related issues, they tend to get a bit rhetorical towards the climax when emotions push solid evidence and logic to a backseat. For example, a rather bizarre ‘admission’ by one of the film’s principal characters in the courtroom would have landed the girls on a sticky wicket in real-life scenario (I will not divulge more details here for obvious reasons).

But these minor slips aside, Pink is a taut, engrossing watch that leaves you disturbed at so many levels. A particular scene where Taapsee Pannu is picked up in a moving car by a bunch of boys who want to ‘teach her a lesson’ makes you mighty uncomfortable. And this will mostly be the case as you watch the film – your eyes would be wide open while you keep shifting in your seat every now and then. Reality stings. Perhaps.

One thought on “Pink Movie Review: The Film Leaves the ‘Modern Society’ Red-faced”