It is a little surprising and also comforting to see a new Malayalam film begin with a scene involving veteran actors like Innocent and Kaviyoor Ponnamma. The introduction to the film begins with a family gathering in the ancestral home and we get to realize that the protagonist who is visually impaired is seen to be the near perfect son of the family, ever sacrificing for his siblings. And if you are wondering if this is going to be the tone for the rest of the film, then let me assure you that there is more to the film than just this aspect. As the protagonist prepares to return back to the city, he goes on to talk to someone on the way and just for a brief moment there is a mention of Kalaripayattu. And wait, there’s more to follow, he goes on to follow that with a semi classical rendition while on the ferry ride back to the city.

And then even as the opening credits roll we are more or less able to get a clear perspective in brief of what the director is trying to do with the film. In the process we get an introduction to the protagonist as well. Of course the film I’m referring to is none other than Priyadarshan’s Onam release, Oppam and the leading man is none other than the popular filmmaker’s trusted collaborator, Mohanlal. The introductory segment is used effectively by Priyadarshan in a simple yet effective way to start the tale and to reassure us that us that the evergreen director-actor combination is going to deliver with this film. Naturally I was quite curious to know if they indeed have come up with something that is good enough to make a comeback of sorts. For the wonderful films that they have given us in the past, I was willing to let go of their recent duds as long as Oppam did not turn out to be totally a damp squib.

It is known to all that Priyadarshan has been out of form for a long time now, both in Hindi and Malayalam cinema.  Unfortunately none of his films in the recent past seem to have worked either commercially or critically, so much so that that even his die-hard fans have been questioning his ability to make a solid comeback.  In the recent past he has of course tried to revive the old magic along with Mohanlal on a couple of occasions, first with Oru Marubhoomikkadha (2011) and much more recently with Geethanjali (2013). While the former was a comedy and a mishmash of several of their earlier hit films and somehow worked commercially to an extent, the latter was a horror film whose output was unfortunately more horrifying than the actual film. Of course with Oppam getting announced one was hoping that it would actually work but then one couldn’t say that with confidence. The promos definitely looked thankfully good, something that has not been the case with most of Priyadarshan’s recent films. 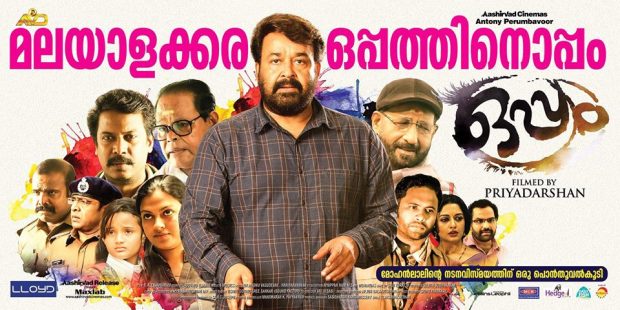 Oppam is the 3rd straight release for Mohanlal, all in the span of a few weeks, coming closely on the heels of Vismayam and Janatha Garage. Jayaraman (Mohanlal) is visually impaired but the disability comes with an advantage, he is gifted with an exceptionally well developed sense of smell, sound and touch.  A handy man of sorts, he works as an elevator operator in an apartment building and is always in demand, being the trusted go to man for all the residents living there. Justice Krishnamurthy (Nedumudi Venu), a retired Chief Justice of Kerala is an elderly person who only trusts Jayaraman. On the one hand he has to stave off the advances of his relatives who are eyeing his money and at the same time he has some secrets surrounding the existence of his alleged daughter Nandini (Baby Meenkashi) who is away in a boarding school, with only Jayaraman being the single point of contact with her. One night when the whole apartment complex is buzzing with a wedding celebration, the retired judge is found murdered in his flat and unfortunately Jayaraman comes under the radar of the police due to circumstances. Now not only does Jayaraman have to find out the killer and prove his innocence, but he also faces the challenge of protecting Nandini from the reach of a serial killer.

This is a straightforward thriller from Priyadarshan but with an attempt to have all the commercial elements in place. He has also tried to ensure that the audience ends up clearly empathizing with the protagonist.  For most part of the film the antagonist seems to be easily having the edge over the protagonist and it is more a case of brain over brawn that we witness over here.  What’s also interesting is that that this is not a whodunit, we clearly know who the antagonist is, not too far into the film. It is actually a cat and mouse game of sorts and the antagonist is also intelligently used in the film. Now there are of course allegations of the film not being completely original, with shades of the Korean film Blind (2011) and even an old Hollywood film being spoken about. But then don’t we know that originality was never the hallmark of most of Priyadarshan’s works? Even here he has ensured that the screenplay which is based on Govind Vijayan’s story is developed keeping the ingredients of a Priyadarshan film in mind.

In fact one can clearly also notice references to some old Mohanlal films including Priyadarshan’s own Kilukkam (the retired judge and the mystery daughter angle) and various family films of the superstar like a Balettan. But then it’s thankfully done in good taste and does not look odd over here. It was interesting to see Anusree playing a dutiful cop who is keen to solve the case of a suspected serial killer. The comedy is nowhere as good as those seen in some of Priyan’s popular films but a few scenes do make us chuckle. Like the scene where there is an exchange of dialogues between Mammukkoya and Chemban Vinod. There was no real scope for romance in a tale like this and that is why it’s quite strange to see the forced attempt to bring in a romantic moment between Jayaraman and Devayani (Vimala Raman). It looks pretty silly and sticks out like a sore thumb in an otherwise taut narrative.

Why was a special moment of recognition of producer Antony Perumbavoor brought in the form of a lingering moment is something that beats me though. The music by the new composer group 4 Musics is quite good and the songs, especially “Chinnamma Adi” (lyrics by Madhu Vasudevan and vocals by M.G.Sreekumar) and “Minumgum Minnaminunge” (lyrics by B.K.Harinarayanan and vocals by M.G.Sreekumar and Shreya Jayadeep) bring in a nostalgic feeling. N.K.Ekambaram’s cinematography is a highlight, especially the way the night/dark shots have been canned. The film has a huge ensemble cast and thus not everyone gets adequate screen time. However the casting choices have been more or less effective.  Vimala Raman is paired with Mohanlal after a long time but doesn’t really have much to do in the film. Comparatively it is Anusree who gets better screen time and also does justice to her character. Baby Meenakshi as Nandini is pretty good and her scenes with Mohanlal look very genuine in terms of the chemistry that they share between them.

Of the rest of the star cast Nedumudi Venu, Mammukkoya, Aju Varghese and Chemban Vinod register their presence. Samuthirakani is utilised very effectively by Priyadarshan and he does well as the strong adversary of Jayaraman. But if there’s a reason that the film manages to hold out on its own then it’s certainly due to Mohanlal who fits into the role of Jayaraman quite easily. He is restrained for a major part of the film and comes across as the underdog effectively. While the role doesn’t really test the veteran actor, it is a reminder of some of the simpler common characters that he has played in the past. The film also shows flashes of the old Priyadarshan, a filmmaker who had come up with many memorable films in the past, often with Mohanlal in the lead. But then Oppam is not an outstanding film and it is definitely not anywhere close to the best of Priyadarshan. But of late this is the closest he has ever got to showing us that he is still capable of delivering a good film like before. Ultimately the Priyadarshan-Mohanlal combination manages to hold our attention, but nothing beyond that. It cannot be heralded as a definite return to form of Priyadarshan, but shows that he has the will to bounce back effectively if he wants to.

Note: Wishing all the readers a very Happy Onam 🙂