What do you say about a film where the very first scene teaches you something new? Despite being good with geography I had no clue of a place called Haflong, but thanks to Dil Se I know that it is a hill station in Assam. What do you say about a film where the hero and the heroine hardly communicate the first time that they meet, so much so that the hero actually remarks at the end of it saying this must be the World’s shortest love story. And what can you actually say when that is followed by a song which is not just a personal favourite, but a song that shook the entire Nation and is popular to this day Internationally as well, the brilliantly choreographed, composed and executed number, “Chaiyya Chaiyya”. Even if the film had nosedived after that I would perhaps have still not really complained, but then there was no need to as it turned out to be a film for which there is everything and more going in its favour. 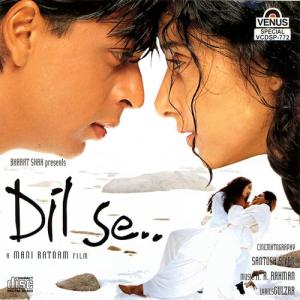 Back in 1998 I was still in college and was super excited, eagerly awaiting the release of Mani Ratnam’s Dil Se. The music was an instant hit, no doubts there and I don’t think people had to go around saying “don’t worry; it will grow on you as keep listening to it”. The A.R.Rahman–Gulzar combination had stuck gold and that by itself added to the confidence in the film. It was too early for me to know anything about filmmaking back then, but I was already hooked to the films of Mani Ratnam and revered him. Add the presence of SRK, an actor whom I really admired-something that everyone in my college knew and it looked like an irresistible film in all respects. Closer to the release of the film my mood was dampened to an extent, the reason being the fact that Dil Se was not to release in Tamil Nadu. Perhaps it made some business sense for the makers to focus instead on the Tamil dubbed version, Uyire as far as Tamil Nadu was concerned.

After all back those days beyond Chennai and Coimbatore the reach of Hindi films in that southern state was a little limited. And thus grudgingly I had to watch Uyire on the day of its release and despite this not being the original version; I was still hooked and felt happy to have gone for the movie alone, as it did not look like it could appeal to a lot of people. But surprisingly some of my friends insisted on watching the movie again, and so I went off to watch it again a few days later and my appetite only increased. If I am not wrong perhaps this was the film which made me actually realize that one can actually fall in love with a film despite the presence of flawed characters. In fact perhaps that was the main reason why the film appealed to me so much. I couldn’t help but notice that in the entire film (as far as I remember) Moina/Megnhna (Manisha Koirala) never actually confesses to being in love with Amarkant Varma (SRK). But still they were in love and a very crazy sort of a love, a feeling for each other that they knew was only putting their lives at stake.

But that’s the power of love right? It makes you do things that generally a rational mind wouldn’t want to be doing. After all why would Amar want to risk it at all when he was all set to settle down to a life of married bliss with Preeti Nair (Preity Zinta), a lady who seemed to be refreshing in her own way and with whom Amar surprisingly even felt comfortable to be around with? In fact I was so happy to see Mani Ratnam project Preeti as someone who had a zest for life and someone who was smart and quite balanced. When she asks Amar if he’s still a virgin, I was pleasantly surprised as you didn’t get to hear women speak like that so liberally those days either on screen or around you. Similarly later in the film there’s a moment where she jokingly asks Amar about his sexual orientation, again a very refreshing feel, even lightening up the proceedings in a very intense film otherwise.

When Meghna makes a re-entry into Amar’s life it is at a crucial juncture in his life, when things seem to be completely going in the direction of a whole new World that is emerging. Yet he gives it all up and enters a downward spiral, a point of no return. Yes of course we keep wondering if Meghna was only using Amar all this while, especially in Delhi when she turns up along with a fellow naxalite (Mita Vashist). Well this is a point that is worth a considerable debate because even if this was true and if Meghna did indeed use Amar, it is also true that somewhere even she had no control of her life and also that she couldn’t reciprocate her love in the way that she would have perhaps wanted to. My joy knew no bounds when Dil Se finally released in Tamil Nadu, almost a couple of months after the release of Uyire and with Uyire still running in a few theatres in the state (Uyire turned to be a better prospect commercially than Dil Se which unfortunately was a box office flop).

As I sat down with rapt attention at the main screen of Sathyam Cinemas in Chennai, finally watching the original version of the film, I couldn’t but marvel at this interesting tale of love. It was also the first film which made me fall in love with the North-East and Ladakh, places that I did manage to visit later on in life. It is also a rare mainstream film to address the topic of extremism in the North-East and while I do know from a few friends from the North-East that historical and political accuracy is a matter of concern with Dil Se, I must admit to being unsure of the same. But what I do know is that the film did have the guts to tread on a ground that not many people before or after have managed to do. If anyone had any doubts on the acting capability of the main leads, SRK and Manisha Koirala then I would only respond by saying that please watch the segment in Ladakh where they actually “fight” it out, followed by her ending up with her jaws getting frozen of sorts. The way the two actors have enacted the scene is something that I can never stop feeling in awe of.

I have gone on to watch the film many more times over the years, either in parts or completely and had once on TV caught a few seconds of additional footage during the end credits which seemed to suggest what happened to Meghna’s associates eventually. I seemed to have forgotten this somehow, a fact that I realized earlier today thanks to a HD link of the film put up on YouTube by Venus Films who hold the rights. Ajay Nair a friend and a fellow author on MAM was the one who pointed it out to me, initially we were excited as this was the first HD link available of the film so far online (legally at least). But there was a catch, the film seemed to be way shorter (nearly 46 mins shorter) than the regular version. And just when we were wondering if we should express our outrage on social media channels over this, I was surprised to realize that this was actually a re-edited and re-certified version specifically made for Doordarshan way back in 1999. Now why would one chop off such a major part of the film is something I am not aware of, but would certainly try finding out.

Alongside this discovery Ajay happened to see the additional footage during the end credits, something that he had never noticed before and I remembered that I had seen it once long ago. But again we realized that most people haven’t perhaps seen it yet as the theatrical version did not have it. Nor does the official DVD of the film or the SD version of the film available online (again courtesy Venus Films on YouTube) have the same. Hence I would strongly recommend that you check out the HD version of Dil Se, the link of which is given below , for 2 reasons-

1. Check out the additional footage in the end credits for the first time or revisit it
2. To realize how good the visual quality of the HD version is and to make you wonder
what we are missing out on by not having a HD version of the complete film.

I can go on and on about why Dil Se would always remain special to me, but I would stop right here as I don’t really think it is necessary. I don’t know how many people feel the same about Dil Se, and that is not something that I am bothered about. But I for one do realize that a film like this gets made only once in a while and hence I will continue to relish the film direct “Dil Se”.