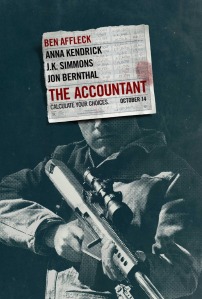 Post the acclaimed sports drama Warrior (Tom Hardy, Joel Edgerton), director Gavin O’Connor is back with The Accountant. The film narrates the story of an accountant (Ben Affleck) who forges the accounts for his clients. Besides Affleck, the film stars Anna Kendrick, Jon Bernthal, J K Simmons and John Lithgow.

The screenplay of the film is written by Bill Dubuque while D.O.P Seamus McGarvey (The Avengers, Godzilla) has shot the film. The film is scheduled for an October release. Meanwhile, do have a look at the trailer of the film and do let us know your views on it.