Of late Marathi cinema seems to have taken a big liking towards remaking films from the South and all kinds of films across genres are being attempted with an idea of striking it big in Marathi as well. For every Classmates (remake of the Malayalam blockbuster Classmates) which is a success there are also films like Vrundavan (remake of the Telugu hit Brindavanam) and Shutter (remake of the critically acclaimed Malayalam movie by the same name) which didn’t really hit the bulls eye. So when I first heard of Samit Kakkad’s attempt at remaking Kaakka Muttai in Marathi, I was a little sceptical to be honest. It wasn’t that I did not believe in Samit’s intentions, but considering that Kaakka Muttai has been one of the best Tamil/Indian films in recent times, winning critical acclaim as well achieving commercial success, repeating the act in Marathi looked difficult to me. A chat with Samit when the first look poster of Half Ticket was unveiled did give me some hope for sure.

But as they rightly say “seeing is believing” and hence I did want to reserve my final opinion till the time that I would end up actually watching it. And now that I have seen Half Ticket I can definitely reflect back on my apprehensions and say that I was wrong and Samit was indeed right after all. Why do I say that? Well not without a reason of course and I will elaborate on that soon. But before that let me tell you that it is difficult to evaluate a film on its own merit when it’s a remake of another film, more so if you have seen the original and perhaps liked it as well. Knowingly or unknowingly one tends to mentally compare the two films together, often giving you the feeling that the adaptation/remake is not as good as the original. Hence there’s no surprise that even I tried to remember and connect with scenes that I already knew from Kaakka Muttai, but pretty soon I felt that the film was best enjoyed if I just told my mind to relax a bit and so tried watching the film for what it is and with a fresh perspective.

One of the best things about  Half Ticket/Kaakka Muttai is that the subject is universal and that’s why it is easy for people to connect with the film. So if the film was based on two boys from the slums of Chennai in the original, the action shifts to Mumbai in Half Ticket and the essence continues to remain the same, of course taking on the dynamics of Mumbai and the complexities that the city is famous for. So we have Shyam (Vinayak Potdar) or Chotta Kavlyacha Anda as he prefers to call himself and Ram (Shubham More) or Mota Kavlyacha Anda here, two fun loving kids from a slum in Mumbai. The brothers inhabit their own world merrily and they live with their mother (Priyanka Bose) and grandmother (Usha Naik). With their father being in police custody their mother has to manage the household by working in a factory and the kids have to drop out of school to help their mother by collecting coal from railway tracks and selling it off for whatever is possible. Their favourite past time is to hang around in a nearby ground and enjoy consuming crow’s eggs. 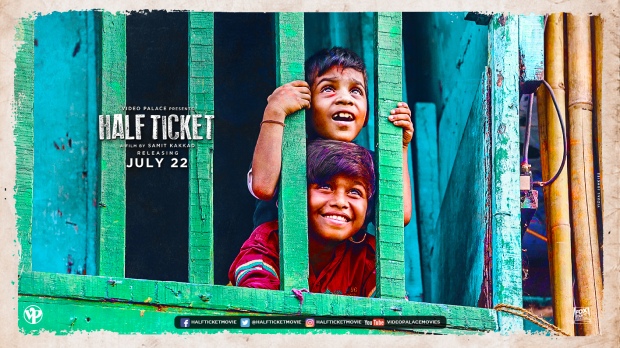 But their happiness is short lived as the ground is sold off to a businessman who sets up a pizza joint over there. Inaugurated by Marathi actor Ankush Chaudhary, they see the actor relishing pizza over there, a food item that they have never heard of. But they are intrigued and later on a TV commercial of the pizza outlet as well as a pamphlet of the same makes them fall in love with pizza. At a price of Rs.299 they know it’s not going to be easy for them to afford it, but how can two determined kids give up on their dream so easily. And thus they go about trying to raise money through various means; in the process they face many interesting situations. What lies in store for them unknowingly is a life changing moment as well, what exactly is this moment and how do they tackle it is what we get to see as the film progresses.

Samit Kakkad certainly needs to be commended for not taking away the soul of the original as Half Ticket stays quite true to the original. The changes that are made are very minor and there’s nothing drastically different just to prove a point or give it a touch of novelty. The choice of locations is commendable, that Mumbai has a lot of colour and character is known and both Samit and DOP Sanjay Memane have made sure that the film makes that quite visible. Shot on real locations, the film also brings out the contrast between the haves and the have notes in a subtle manner. The casting choices are also a good reason for ensuring that the film works, even the smaller supporting characters are portrayed by actors who fit the requirement quite well. Similar to the original here too the music plays a major part in lifting up the film’s output to a major extent, both in terms of the songs and BGM. G.V.Prakash Kumar who had composed the music for the original, does a neat job here as well and the songs flow very well with the narrative.

Half Ticket is a slice of life film and you can easily relate to the film no matter which strata of the society one belongs to and that’s what makes the film endearing. Another factor that works in favour of the film is the undercurrent of humour that runs throughout the film and there’s hardly any dull moment in the film. The film also gets the emotional quotient right, without going into an overdrive. Some of the scenes are sure to leave you smiling, like the way both the kids hit upon ideas of making money, or the way Chillar (Nitin Bodhare) ends up spoiling Pokya’s (Kailash Waghmare) chances of making some easy money. The interactions between the two kids and Tutti Frutti (Bhau Kadam) are also quite effective and nearly as good as the similar moments in Kaakka Muttai. Usha Naik as the grandmother is quite effective and Priyanka Bose in her first Marathi film does extremely well as the mother who dotes on her kids and yet hapless at times.

Both the kids are fantastic and share tremendous camaraderie and chemistry between themselves and that clearly shows. Kudos to Samit Kakkad for managaing to extract such amazing performances from them,as they literally carry the film on their shoulders. It is also good to see the kind of confidence that the producers (Nanu Jaisinghani, Mohit Jaisinghani and Suresh Jaisinghani of Video Palace) have bestowed upon the film, resulting in a solid promotional campaign. No wonder Fox Star Movies who released the Tamil original have also gone on to distribute Half Ticket as well, making their foray into Marathi films in the process. Half Ticket is a simple, soulful film that would appeal to the entire family and it’s definitely something that moves you as well as leaves you entertained.

Disclaimer- MAM is an official media partner of the film. This review however is a personal take on the film by the author.