A quiet moment when you just stand transfixed as you see your beloved in front of you, only to see her walk past you as if she did not even acknowledge your presence. Your heart aches and you pine, not just for her but also for all those wonderful moments that you both shared together. And you repeat the act every day, only to see your lady love walk away the same way. What would such a moment remind you of? Would you really expect this from a Salman Khan film? Actually I wouldn’t and not because Salman isn’t good with romance, in fact he has done enough and more romantic films but then there’s always that expectation that he would come up with something animated that catches the lady’s attention at the end. But that doesn’t happen in Ali Abbas Zafar’s latest film, the well anticipated Sultan that’s bhaijaan’s Eid attraction this time around. 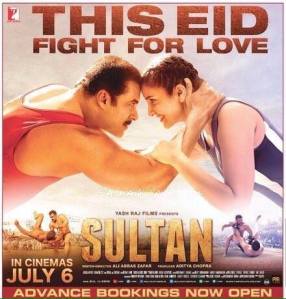 Or else take for example a scene where Salman or rather Sultan is in front of a mirror, staring at what seems to be an aged, weather-beaten version of a once super fit sportsman. As he realizes that he is unfit, looking down at his exposed upper torso he gets upset, his face clearly expressing his disgust and he nearly breaks down. Only to quickly wear a shirt in an attempt to mask the physical degradation that his body has undergone, storming off to meet the challenge imposed upon him by the coach (Randeep Hooda) he wants to train under. Now one might wonder as to what is so amazing about this scene and why am I elaborating about this. Well it’s simple, for one Salman is not really known for bringing out subtlety when it comes to performing (yeah I know there is an odd Bajrangi Bhaijaan which suggests otherwise). Also let’s not forget this a rare occasion of the superstar actually doing something like this on screen.

Moments like these definitely suggest that Ali Abbas Zafar’s Sultan is at least not a typical run of the mill Salman Khan film, though it’s certainly a commercial entertainer, no doubts about that. As soon as it was announced that Salman would play a wrestler in the film there was a lot of curiosity regarding the film. Added to it being the fact that Aamir Khan had around the same time signed up to play a wrestler himself in the forthcoming Dangal. If that was not enough then we have Anushka Sharma also playing a wrestler in Sultan. Despite all this, honestly speaking I was still a little sceptical of how Sultan would eventually turn out and the reason for this was none other than writer-director Ali Abbas Zafar himself. Well yes of course his previous films-Mere Brother Ki Dulhan and Gunday had made money, but then at least they aren’t films I would perhaps ever want to revisit for any particular reason.  Nevertheless I set off to watch Sultan FDFS, trying to find out for myself as to how the film is.

The film begins with us being introduced to a Mixed Martial Arts league in India which apparently is not really doing well. Aakash Oberoi (Amit Sadh) the promoter of the league just about manages to get the other stakeholders to give him one last attempt at resurrecting the league and that is when his father (Parikshit  Sahni) tells him that the only one who can help him in the process is  Sultan (Salman Khan). Once the pride of Haryana and Indian wrestling, Sultan is a former Olympic gold medallist and World Champion, who does not want to have anything to do with the sport now. Through Sultan’s close friend Govind (Anant Sharma) Aakash comes to know the reason behind Sultan’s decision to leave the sport. Long ago Sultan used to be a happy go lucky guy in Rewari, Haryana who fell in love with Aarfa (Anushka Sharma) the reigning state wrestling champion and an Olympic aspirant. Sultan goes on to become a champion wrestler himself, winning her heart and getting married to her as well. Unfortunately certain events in their life make them move away from each other, making Sultan to leave wrestling as well. I am sure anyone can figure out what happens in the lives of Sultan and Aarfa as the tale draws to a conclusion right?

Of course the film does follow most of the tropes used and seen in sports based films, a la Rocky series like. And the way Sultan trains up to get back in form in 6 weeks to enter the MMA league is also in a way reminiscent of desi outings like Apne and Brothers. But despite knowing which way the film is eventually going to turn out, by and large the narrative manages to hold our attention. At a run time of 170 minutes that’s not an easy task at all and some credit should be given to Ali Abbas Zafar for being able to achieve the same. Of course you do raise your eyebrows when you realize Sultan becomes a wrestler in just one month (in the past) or that he easily gets back in shape to knock down opponents in the MMA league. But I guess that’s where cinematic liberties and suspension of disbelief comes into effect :). It’s good to see that Aarfa is shown as a strong willed woman who is career minded and wants to set an example for the women of the state.. Aarfa is no pushing ground at all; she has a clearly interesting character arc in the film.

For a state like Haryana where age old customs still dominate the society, this is a welcome relief indeed. While Anushka may not physically look very convincing as a wrestler (except in a few scenes), she does manage to hold her own against Salman. And it’s actually encouraging to see a well written role for the female lead in a superstar film. Call it coincidence or whatever but after Bajrangi  Bhaijaan this is once again a film that sees a slightly restrained Salman Khan on screen even as he graciously sports a weather beaten aged look, also admitting to being in his early 40’s and coming across as someone who is down and out. It’s good to see him manage to look reasonably convincing both as the unfit, ex-champion wrestler as well as a fit sportsman who is back on the ring for a reason. The usual Bhai histrionics are toned down to an extent, though he does manage to pull off some trademark dialogues in style.  And yes he even gets a signature dance move in place which by now I am sure has already become popular as well.

Thankfully the film avoids getting into an emotional overdose and that certainly makes the proceedings a lot more palatable. The MMA portions are handled well but of course follow a predictable pattern and one could be disappointed if you expect that to be the highlight of the film. Vishal-Shekhar are in good nick over here with their compositions. In particular I must admit that the “Jag Ghoomeya” number (lyrics by Irshad Kamil and vocals by Rahat Fateh Ali Khan) is a delight. The film also benefits due to good casting choices (Shanoo Sharma) and even the supporting cast is well utilised. Amit Sadh as the MMA league promoter is pretty good and Kumud Mishra is a delight as Aarfa’s father and a wrestling coach. Randeep  Hooda adds value in his cameo as the coach who trains Sultan when he decides to enter the MMA league, their interactions carrying a good blend of humour and energy.

But it’s Anant Vidhaat (Sharma) who plays Sultan’s childhood friend Govind who impresses the most, despite this not being his debut film Sultan is what would go on to be a turning point in his career I guess. Anushka Sharma as mentioned earlier gets a meaty role as Aarfa and plays the ideal foil to Salman’s Sultan. She plays a spirited character who takes the emotional distress to heart with a lot of conviction. Salman is good in his slightly restrained avatar and is the life of the film indeed. Though Sultan is no game changer it is still a commendable Salman Khan film, one where we more or less root for him with the slogan “kar de chatai” as he tries to size up as his opponents in the ring. Ali Abbas Zafar manages to make a mark for himself with this love story against a wrestling backdrop and I wouldn’t really be a surprise if Sultan goes on to be accepted widely, both by fans of Salman Khan and the aam aadmi as well.