Ali Abbas Zafar’s ‘Sultan’ has all the trappings of an earth-shattering blockbuster and in all probability it will be one. Not just because it has the box-office demigod Salman Khan, the man who can right now earn 200 crores even by selling peanuts outside a theater, but also because it is a story of redemption, revival and fighting for one’s love – a potion that can be sold like hot cakes to Indian audiences. The fact that Sultan has Bollywood’s original bodybuilder Khan playing a wrestler at a tender age of 50 only adds to the aura and intrigue of the film. But alas, all that augurs well does not necessarily end well. And a lion’s share of that blame should lie at the feet of the director.

To begin with, Zafar, who is also credited with writing the film, seems to have a rather weird sense of timelines. You do not expect brainwaves of any sorts while watching a Salman Khan film but problems peep in when timelines shown in the film delve in the realm of fantasy – even from the point of view a typical ‘masala entertainer’. Sample these – Sultan Ali Khan, an aimless, average 30-year old fella ‘trains’ and becomes a champion wrestler from his state within a month. Yes, all the champions who sweat, bleed and prepare for years to make themselves merely competitive be damned. And mind you, Sultan Ali Khan is not from Timbuktu that might not have some serious wrestling talent, the guy is from Haryana, a traditional breeding ground for champion wrestlers. In fact, the rise of Sultan to international acclaim (he bloody wins a Gold at Olympics!) is so outlandish and meteoric that you may be tempted to take up wrestling as a quick claim to fame yourself (They should have put up a ‘Do not try it at home’ disclaimer).

Alright, our Sultan is hurt and upset when his romantic advances to Aarfa (Anushka Sharma) – who is another ‘state-level champion wrestler’, are shunned, but even a bruised ego cannot really make you travel time. Can it? There has to be some semblance of believability when it comes to mastering the art of a sport as grueling as wrestling. Some basic tweaking in the story and screenplay would have made Sultan a credible tribute to the sport it claims to represent on screen but who cares. 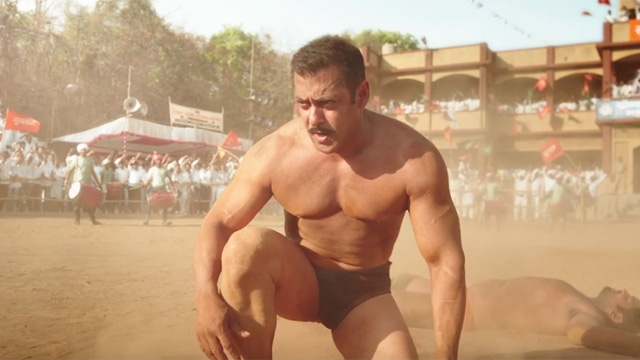 And I am not even delving into other eyesores like how Sultan ‘ages’ over a span of 8 years, from 30-something to 40 plus (while almost looking the same, except for six-packs turning into a family pack and then back to six-packs, and clean-shaven look making way for beard and mustache), but ageing does not seem to touch Aarfa and Sultan’s best friend Gobind (a fantastically quirky Anant Sharma), who anyway look like Sultan’s children because of the wide age gap between the actors.

Sultan’s issues with timing do not end here. It gets more troubling when it comes to how the character of Aarfa shapes up in the first half of the film. From being a motivated, spirited wrestler who by her own admission is aiming for nothing less than an Olympic Gold, she suddenly gives up all her hopes and ambitions to first fall for Sultan (through a tacky proposal on the ring) and then ends up being pregnant right before her most coveted tournament is about to begin. It is a little difficult to digest given Aarfa’s monologue on ‘maa, beti’ and their empowerment, and how she (quite fittingly) spurns her ‘lover’ when he calls her his ‘girlfriend’, lecturing on how she can’t be with a man whom she does not respect. But once the man ‘earns his respect’, our lovely ‘Jhaansi ki Raani’, as Sultan once calls her, gives it up all and finds it okay to live under the success and validation of his newly-successful husband. Faking feminism, are we?

But if you are ready to overlook these giant ‘leaps of faith’, Sultan can be your cup of tea. In fact, once the film flies past its crazy timelines in the first half, which serves little purpose apart from building an ‘emosnal’ backstory of sorts for our hero, Sultan is quite an eye-pleaser and rabble-rouser in the second half. The transformation of an ageing wrestling champion into a MMA (mixed martial arts) professional checks all the boxes of a plucky underdog story. Your adrenaline starts to pump and your sympathies are well parked in Sultan’s half once he agrees to fight for the young franchise owner (Amit Sadh). At this point, what also lifts the film is the entry of the terrific Randeep Hooda as Sultan’s coach, who shines in a short but well-written role. His initial crisp, uncharitable exchanges with Sultan and ability to show him the mirror (quite literally, in one of the better scenes in the film, where Sultan looks at his family pack abs in the mirror) are big highlights of the film and lend it a much-needed shred of authenticity.

As for Salman, he lives up to his reputation of being a great ‘entertain-actor’. Yes, the Haryanvi accent is tough on the ears to begin with but you eventually get used to it. Post the lovely Bajrangi Bhaijaan, Salman yet again shows that he can carry off the restrained act as comfortably as he carries flamboyance. The cute Namaste at the end of every fight, riding around Haryana countryside on a scooter, and that trademark middle-class half-sweater make Salman’s Sultan affable. This goodwill of Sultan’s character demands and commands your indulgence in the ring where he comes from behind in crucial no-holds-barred- fights. Not just that, guess what, Sultan even says sorry a couple of times in the film! Allow me an aww and a mild clap for Salman 2.0.

Matching Salman in gumption and some good acting is Anushka Sharma in the role of Aarfa Hussain. The lady suffers because of a poorly sketched role but does well in crucial emotional scenes where she easily overpowers her much-senior co-actor. However, going back to authenticity, Anushka does not really ‘look’ like a wrestler in the few scenes where she actually has to show up in the ring. All that looks real is her hairdo of a typical female wrestler.

Sultan’s action scenes are quite well-choreographed with MMA fights sequences being an absolute treat. It is not exactly a great yardstick of comparison, but the film’s fight scenes are a league above Brothers – another recent film that had MMA as its core theme. The film’s music (Vishal-Shekhar) is quite peppy and boisterous, with the title track and ‘Jag Ghoomeya’ also boasting of some fine writing (lyrics by Irshad Kamil). Sultan could definitely have been a lot crisper (it is a long, long film at 2 hours and 50 minutes) if Ali Abbas Zafar would have invested a little less in the fantasy world of the first half.

Overall, Sultan has definitely got more heart and soul than Ali Abbas Zafar’s despicable last outing, Gunday, but it is in no way a complete change of fortunes for him. It rides and relies heavily on Salman’s massive star power and, in a way, is yet another case of a mediocre outcome of a grand promise. Watch it if you are ready to take giant leaps of faith or your loyalty to Salman is unflinching. He won’t disappoint you, the film well may.

P.S. – Excuse me if you think, my obsession with ‘timelines’ is an overkill. Work in a corporate for a while and perhaps you will understand.