Pari (Hetal Gada) is a 10 year old girl residing with her visually impaired younger brother Chhotu (Krish Chhabria) in a remote village of Rajasthan. Living in a world which is seemingly devoid of smartphones and other fancy gadgets that dominate the lives of city bred kids, Pari and Chhotu’s existence is an idyllic one with films being their only access to the outside world. Cinema drives their world as they weave fables around their favourite stars Shah Rukh Khan and Salman Khan. It also helps them to escape the harsh realities of their lives. Post their parents demise; the kids live with their loving but helpless uncle (Vipin Sharma) and the cold hearted aunt (Gulfam Khan). After seeing a poster for an eye donation campaign plastered with Shah Rukh Khan’s face on it, Pari believes that Khan is the only person who can help to restore her brother’s vision. After learning that the star is shooting in Rajasthan, the duo embarks on a seemingly impossible journey to meet him in the hope of fulfilling this equally impossible dream. 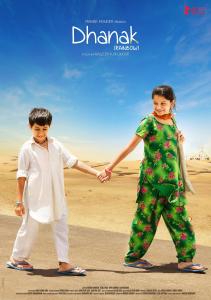 A look at Nagesh Kukunoor’s repertoire reveals that the best of his films including Iqbal and Dor focus on overcoming insurmountable odds, a hope to lead a better life and triumph of the human spirit. His latest feature Dhanak (Rainbow) too treads a similar path. It also underlines how movies in how our mainstream cinema provides the mango people an escape from their dreary lives, which is the case with Pari and Chhotu too. The kids often go with their uncle to watch films at the local tent theatre. The fascination with cinema is what fuels Pari with an unrealistic expectation that her favourite star will help her win the obstacles of life.

Kukunoor treats the brother sister bonding with the right amount of realism and maturity. The siblings spar with each other over their favourite actors, the brother’s never ending appetite and his obnoxious ways. Yet they always cling on to each other and hope to overcome the various obstacles they face. Dhanak operates within the confines of those feel good Hrishikesh Mukherjee, Basu Chatterjee movies of yore in which the most threatening of consequences are surpassed with a considerable ease and the most sinister of people are defeated by the kindheartedness of the protagonists or those around them. It may also be noted that Kukunoor has often cited Mukherjee as one of his inspirations which may explain the thematic similarities their films share.

The film is also a road movie and sees the kids encounter several myriad characters en-route their journey to meet the superstar. Some of these stay etched in your memory such as the truck driver who confesses he’d love to meet the star if not for delivering a consignment of tomatoes or Vijay Maurya as the kind gentleman from a marriage entourage and his son who bonds instantly with Chhotu. 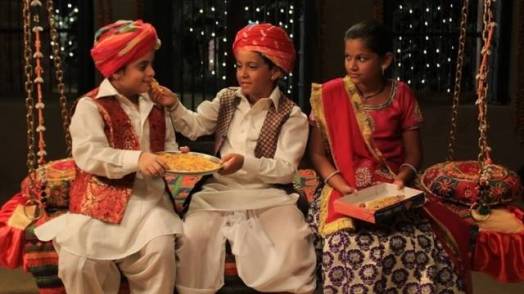 Such believable characters coupled with the camaraderie of the kids make it impossible to not warm up to the film. Yet one can’t help but often scream festival bait as the film throws up several tropes and characters that pander to the west’s misplaced and mythical impression of India. Besides gypsies and a self proclaimed godwoman, there’s also an American musician who springs up in the midst of the desert and gives the film an opportunity to force fit the Dama Dam Mast Kalandar song into the proceedings. Though the Godwoman (Vibha Chibber) recalling her days at NSD with Shahrukh Khan does leave one amused. The constant sparring of the kids over Shahrukh and Salman and Chhotu referring to the latter as Bhai gets annoying at times and gives one an impression that the film is desperately trying to cater to populist sensibilities.

Despite this, the film doesn’t appear schmaltzy for most of its parts, since Kukunoor knows when to pull the stops except for a few missteps. Thankfully he also resists the temptation of milking Chotu’s impairment to emotionally manipulate audiences. Rather he shows how Chhotu has come to terms with it and uses his impairment to emotionally manipulate those around him in an innocent way. The impressive performances of Gada and Chhabria also helps the film to move along smoothly even when the situations around them get a bit too flabby. Vipin Sharma is also likeable as the kind hearted uncle and shares a wonderful chemistry with the kids. A special mention must be made of Chirantan Das’ cinematography which captures the punishing yet captivating desert landscapes in its full glory.

Yes Dhanak is not devoid of flaws. Yet it is tough to not warm up to this film since it asks of us – the cynical viewer to dig deep inside and rediscover the innocence and goodness that prevailed within us and was lost as we grew old and life happened to us.

One thought on “Dhanak Movie Review: A Little Hope Is All We Need”