“This is your grief, Tara. Your’s alone” says Shiv Kumar as Tara tries to come to grips with the lemons that life has thrown at her. This line seems to underline the film, where 2 strangers wait for their partners hospitalised in coma, and have no one but themselves and each other to turn to. Waiting is a subtle tale of loss, played beautifully with pathos and the odd smattering of hope by Naseeruddin Shah and Kalki Koechlin as they come together after 5 years since That Girl in Yellow Boots.

The film almost entirely focusses on 2 contrasting people, a generation apart, whose only commonality is they are waiting – Shiv Kumar (Shah) has been waiting for months to see her wife of 4 decades show any sign of waking while Tara (Kalki) has just had her world come crashing down when she is informed that her newly married partner is in a coma following an accident.

Waiting is simple and stays away from using heightened drama in its depiction (no emotional background scores or scenes with outpouring of sorrow). The characters, especially Shah, suffer internally which shows in his eyes (while he claims he is in the 5th stage of grief, that of acceptance, one can see that after 4 decades, he is not going to let go so easy). Kalki is a study in contrast, representing the urban hip twitter loving youth, she mostly wears her emotions on her sleeves, tells the doctors exactly what she thinks of them, uses profanities as part of normal lingo and has mood swings faster than a pendulum clock. Her interactions with Naseeruddin Shah are refreshing, while the generation gap is evident, the 2 quickly form an unlikely bond with no one else for support. In today’s digitally connected world, the lack of physical presence of friends and close ones when in need of support is evident. Amidst the poignant background, there is the occasional tongue-in-cheek humour, mostly at today’s youth (“You know how many followers I have on Twitter, 5800, how many are here, zero!” “What is Twitter?”). 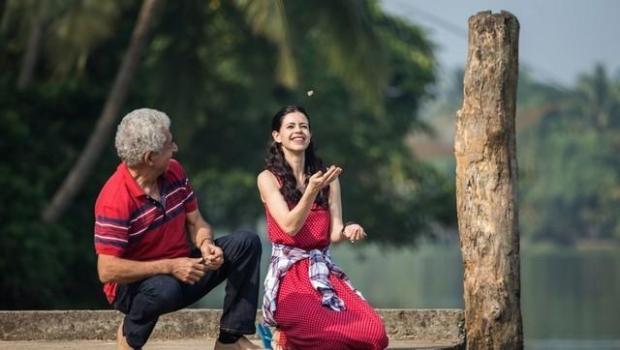 Kalki gives one of her best performances as in the course of the film, we see her character move through the 5 stages of grief, her ebullience is interspersed with pathos. The film also makes a subtle commentary on Doctors “playing God” in determining the course of action for various patients, which aren’t always driven by the best considerations for the patients’ partners, but what as the Doctor (another solid performance by Rajat Kapoor), who sees his role as trying to save lives but not at the risk of empathising, believes is the most pragmatic solution. The film leaves it open for the audience to view his character as a professional who just does his job or someone whose decisions may be influenced by ulterior motives. In either case, the suffering relatives can do nothing but wait.

However, the film has its flaws, the chemistry between the 2 lead characters seems to be too spontaneous initially, but that can easily be pardoned as the interactions evolve. Also, it would have been nice to see glimpses of how Naseeruddin’s character went through the initial stages of grief.

Waiting isn’t a flawless movie but it deserves kudos for just tackling such a subject. Not everything in film need be rosy or high and mighty or consisting of a strong political/ social message, sometimes it’s just driven by c’est la vie.

–Pathikrit Basu (a self proclaimed cinephile)