In today’s fast paced world we see tall skyscrapers housing residential or office complexes all around us. Gone are the days when this was a phenomenon restricted to the Metro cities alone, now it has even percolated down to all the State capitals & even further down. But have we ever bothered to know how these original cities once looked like? How the sites housing these large buildings once appeared to be as? A lot of these places were probably agricultural lands, wastelands or perhaps even slum dwellings where the poor lived, only to make way over course of time to these concrete jungles. Kochi or Cochin is one of those rapidly developing cities, a city that is becoming more and more cosmopolitan by the day. You hear people often say “Kochi ippol pazhaya Kochi alla” (Kochi now isn’t the same old Kochi like before) and perhaps Rajeev Ravi has kept all this in the back of his mind as he conceived his latest film Kammatipaadam, a tale that spans across three decades, taking us virtually into the underbelly of Kochi. 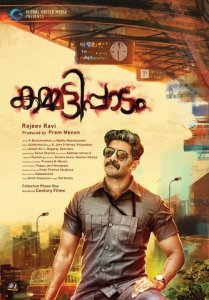 The film begins with visuals of a man who appears to be wounded and clearly facing discomfort due to pain. He goes on to stop a bus and heads to Kochi, during the journey we realize how and why he got wounded and where he’s headed to now. As his tale unfolds we also get to know of his personal story, right from his childhood and that talks of the people around him as well. I wouldn’t find a start like this to be extraordinary in any manner, but then don’t worry as Rajeev Ravi has a lot more for us to watch, observe and assimilate in the rest of the movie. Cinematographer Rajeev Ravi turned director for the first time with Annayum Rasoolum, a slightly unconventional yet realistic romantic film. And his second film Njan Steve Lopez was more of a coming of age film with a clear social conscience attached. Now in Kammatipaadam Rajeev shifts gears completely and attempts a crime drama that doesn’t fall shy of depicting violence when and where needed.

Krishnan (Dulquer Salmaan) is in his early 40’s and works as a bodyguard/security guy in Mumbai. He has been away from home for a long time and we really don’t know why.  He seems to lead a simple life with Vasu (Vinay Forrt) being his friend from back in Kerala and there’s a girl (Rasika Dugal) who clearly likes Krishnan but we aren’t sure if he reciprocates her feelings. All of a sudden he decides to go back home on receiving a couple of calls from his old friend Ganga (Vinayakan). Somehow Krishnan gets the intuition that Ganga is in danger and hence wants to trace him out and help him if necessary. And thus Krishnan lands up in Kochi after ages, but then he realizes that the area that always belonged to him, Ganga and his other friends from childhood, Kammatipaadam isn’t really looking the same as before. In the course of the tale unfolding we see  how Krishnan, Ganga and their other friends went on to work with Balan (Manikandan) and slowly but surely entered the world of crime.

Rajeev Ravi has been aided tremendously by P.Balachandran‘s (he also plays Krishnan’s father in the film) writing. For not only is the story by itself quite powerful and interesting, the screenplay lays great emphasis on characterization. In fact characterization and casting has gone a long way in making sure that the film does a lot of justice in meeting expectations. Rajeev and Balachandran have basically narrated the story from Krishnan’s perspective, we basically get to see the tale unfold through his view. But what is interesting is that there are many more well written characters who are interesting, important and leave a strong impression on us. The film actually could be interpreted in various ways, if the dominant character is just replaced, bringing in a totally fresh perspective. Imagine how the plot would unveil if it was Ganga’s point of view, wouldn’t there be his side to the whole equation with Krishnan, his take on his relationship with Anitha and the subsequent end to the whole story. Or imagine Balan’s take on the whole story, this could by itself work out as a precursor or prequel to the film thanks to the scope. Even Anitha (Shaun Romy) and Rosamma (Amalda Liz) are powerful characters of their own, in particular Rosamma’s ascent from being a simple housewife to a lady wielding considerable clout and position makes for an interesting story.

But it is to the credit of Rajeev Ravi and Balachandran that they have not side tracked themselves from their main track and kept the focus primarily on showcasing or narrating the tale keeping Krishnan in the focus always. There are many wonderful moments in the film, the way Balan, Krishnan, Ganga and the others get noticed in front of a theatre as Balan tries to black market the tickets or even the way in which Balan’s character meets his end, especially the long drawn scene that precedes it with Balan drinking with his gang, Rosamma admonishing him and then the both of them setting off with Krishnan and Ganga in a car, the dialogues and the way the moment is constructed is extremely impactful. Another big strength of the film is the art direction and production design. In the 80’s Kammatipaadam is rightfully shown as a sleepy village of sorts, with fields and small houses all over. As the narrative keeps taking a shift in time we see a realistic difference in the look and feel of the background. Nothing can be more better than an example of the place around the homes of Balan/Ganga and Anitha, from just being a simple lane with nothing much around to a well developed contemporary slum, the change is shown quite drastically.

The film is narrated in non-linear fashion by Rajeev as he keeps switching between the past and the present in an elegant fashion, with even the past being spread out over various years, giving us glimpses of Krishnan as he passes through different stages of his life. In a way Kammatipaadam does remind one of films like Gangs of Wasseypur or Pudhupettai, the former because of the way the narrative unfolds over a long period of time. To add to it I was also reminded of Srinath Rajendran‘s Second Show, Dulquer’s debut film. But then these are mere influences if at all, deliberate or not and Kammatipaadam remains an original tale, a tale of crime, deceit, friendship, love and so much more. We get to see a side of Kochi that’s hardly seen in films and DOP MadhuNeelakandan’s cinematography does wonderful justice to the locations. Watch out for the colour palette used in the film, it brings in a raw and edgy feel of sorts which works. The music (both songs and BGM) by K, John P. Varkey, Vishnu Vardhan and Vinayakan is quite commendable, the BGM is perhaps one of the best in Malayalam cinema of late.

But the film isn’t flawless, there are issues and it’s good to be aware of the same as well. For starters at a run time of 177 minutes it’s quite a long film and also paced a little leisurely. So it’s certainly not surprising if one hears people complain of the film being lengthy and perhaps even a bit slow, but for the discerning viewer these are not things to be bothered about. Also do keep in mind that it’s quite a violent film and the film has been given a A certificate, kudos to Rajeev Ravi and his producer Prem Menon for not diluting the film just in order to get a U/A certificate. But please do not make the mistake of taking along your children or anyone who is not fond of violence on screen as you will be a doing a lot of disservice to them and to yourself. Also for a film which is largely treading the realistic route I wonder what was the need for a climax to be so unlike what Rajeev is known for. Was it a deliberate attempt to go for a cinematic climax? If yes was it with a commercial reason, because this is one aspect which unfortunately sticks out like a sore thumb in the film.

The film has a host of wonderful characters, most of them being utilized quite effectively and strategically by Rajeev Ravi. Vinay Forrt, P.Balachandran, Alancier and Shine Tom Chacko are dependable as always. Good to see Suraj Venjaramoodu and Soubin Shahir being cast against type, a welcome surprise actually. In a film that’s long drawn, violent and with powerful male characters its good to see Shaun Romy as Anitha and Amalda Liz as Rosamma play very well etched characters in the film and they do leave an impact. Dulquer Salmaan does very well enacting Krishnan, a not so simple character; Kammatipaadam once again proves that he is in terrific form of late. In a way he provides a sharp contrast to the rest of the characters, both in terms of looks and personality type. And it’s deliberate as you even see Ganga casually ribbing him by referring to him as Salman Khan of their gang. Dulquer brings in the required maturity to his role especially in the days of the present where he plays a slightly older version of Krishnan.

But the film is made special in particular by Vinayakan and Manikandan, both of them carrying out their roles in a manner which conveys passion, raw energy and conviction. It is perhaps the finest performance of Vinayakan in his career and in Manikandan we see a very promising actor indeed. Ultimately Kammatipaadam is an interesting attempt by Rajeev Ravi and he proves that he has it in him to deliver a crime saga with the right kind of ingredients to make it worthy of an outing at the cinemas.

P.S: The film is playing with English subtitles in select screens outside Kerala.Since I saw it without subtitles I am not in a position to comment on the quality of the same.