Prashant Damle is a widely popular marathi actor courtesy his comic timings on the stage. He has had a number of huge hit marathi plays and has a very loyal fan base. But he never ventured into cinema much and it is certainly very rare to see him play a lead role in a marathi film. 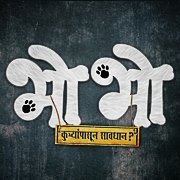 The film, oddly titled ‘Bho Bho’ (probably to attract children who are currently having their vacation), is about a private detective named Vyankatesh Bhonde who is on a case to investigate the murder of a woman. The strange part here is that the woman’s pet dog has been accused of the murder. But all is not as it appears as Bhonde goes deeper into his investigation of the case.

The plot sounds like a much required respite from the usual family dramas of marathi cinema.

The film is directed by Bharat Gaikwad and also stars Subodh Bhave, Ashwini Ekbote and Sharad Ponkshe amongst others.