Which is the movie in which Shahrukh Khan has a double role? Duplicate 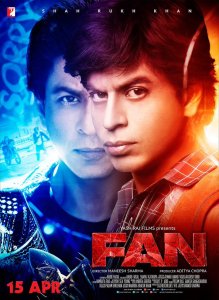 Not just that, it is probably the only movie in which SRK has acted that doesn’t have a single song or romantic scene! He keeps reinventing himself in various ways unlike other super stars. Some experiments worked and some didn’t. Normally he has heroines in his movie. In Fan, he plays himself and his fan (and the role of the 2 female actresses  (Waluscha De Sousa and Shriya Pilgaonkar) and is rightfully kept to the minimal. For once, he justifies his screen presence with a double role.

This movie also acts as the best possible branding that SRK could ever have- more than even his 10 part Discovery series. Right from his ‘superstar’ persona, his house- Mannat, his son’s name Aryan, to his humble beginnings in Bollywood, he has used every part of his personality in Fan.

But that is not what the audience expects of an SRK film and they come out disappointed. This branding that makes him a multi-crore personality is the reason why this movie doesn’t appeal to his fans. Moreover, the trailer gives the whole plot away and all you end up watching the movie for is the special effects, action sequences and an overdose of SRK. Any neutral actor like Irrfan Khan would have been more credible in such a movie.

To give due credit, the Hollywood makeup maestro- Greg Cannom was roped in for the prosthetics and Seyoung Oh (of Avengers 2 fame) for the fight sequences- they have done exceedingly well in their respective departments. Maneesh Sharma (Band Baaja Baaraat) has got the best of SRK in both roles – especially as his fan, and editor Namrata Rao has cut the movie to the perfect size. The story is unique though the movie is predictable. Notable are the 2 action sequences- one on the walls of a dilapidated building in Mumbai and the other in Croatia. SRK gives his best and stands up to the challenge.

This Fan doesn’t blow you, but definitely gives you a whiff of fresh air!

2 thoughts on “Fan: A Quick Review”