Of late Vijay, one of the most popular actors in Tamil Cinema has been seen working with a lot of young directors, balancing their films with those of senior directors like Shankar and A.R.Murugadoss. Of course not all the films with the younger lot of directors has worked, case in point being his last film, Chimbu Deven‘s Puli which couldn’t meet the huge expectations that it was facing, turning out to be a cold turkey eventually. When Theri, Vijay’s film with director Atlee was announced it didn’t really come as a surprise as such. Atlee who started off as an AD with Shankar, turned director himself with Raja Rani (2013), a film which had worked quite well commercially. With Theri the scale was being upped considerably, being a Vijay film after all and that too an action film, quite different from his previous film. With the promos being well received it was but natural that there was going to be a lot of hype and curiosity over the film. Theri’s success was important for both Vijay as well as Atlee. For Vijay it mattered because the success of Theri could make people forgive him for Puli and for Atlee because it could prove that the success of Raja Rani was no flash in the pan. 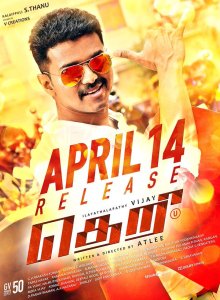 Theri is basically nothing but Chatriyan (1990) meets Baasha (1995). So we have Joseph Kuruvilla (Vijay) who lives in a small town in Kerala along with his daughter Nivi (Nainika) and runs a bakery over there. Nivi’s school teacher Annie (Amy Jackson) takes a liking for Joseph who is seen to be a very simple, peace loving guy. However we all know that this is just a facade and that there has to be a another side to Joseph, something that we get to know from his past. And pretty soon that does happen as Annie comes to know that Joseph is none other than Vijay Kumar who used to be a DCP in Chennai, a cool cop who is fearless as he should be. Why did Vijay Kumar become Joseph Kuruvilla and shift to Kerala? What was the trigger point which led to the transformation? How does the past catch up with Vijay/Joseph once again and how does the tale finally culminate is what we get to see as the film progresses.

There’s this one moment in the film where DCP Vijay Kumar makes his entry, thanks to a law and order situation in a school. Striding in style, wearing his Rayban shades, he faces the mini army of thugs with a lot of calm and composure. One would normally expect that he would beat the living daylights of the rowdies and bring them to task, but what really happens is a little different. Yes you do get to see some action, but not in the manner that one would expect. As Vijay Kumar walks away from the school, one of the school kids comes rushing to thank him and Vijay hands off his sunglasses to the kid, instead graciously accepting the kid’s own funky sunglasses. Lo and behold there comes a song with the cop dancing along with kids. If you are wondering what’s so new or interesting about the whole thing? Well let me tell you that there is a lot of charm with which a tried and tested moment is introduced in the film and Vijay in his characteristic style nails it without going overboard. 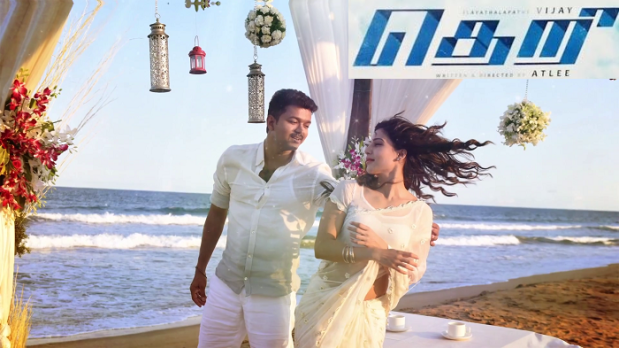 Atlee the writer manages to infuse a few good moments like these here and there in the screenplay in what is otherwise a plot that is totally beaten to death. It is interesting to see the interactions between Vijay Kumar and his mother (Raadhika), where both of them portray their characters with natural elegance and bring in a sense of cheerfulness whenever they interact on screen together.  There’s also some visible charm to the romantic track between Vijay Kumar and Mithra (Samantha), stopping just short of getting a little too cute to be true. However the same thing cannot be said of the chemistry between Vijay Kumar and Annie, appearing a little too functional over here. The horrible wig aside it does get a little too strange to see someone like Amy Jackson portray a Malayalee who conveniently switches from Malayalam to Tamil and vice versa at her own will, making you wonder so much for consistency.

Talking of language and consistency, I fail to understand why as Joseph Kuruvilla, Vijay is shown as a Tamil speaking guy, even claiming to know no Malayalam, only to use it at a very opportune moment. Maybe this is something that takes people by surprise, but rather than being amused I’d say that Atlee probably did not bother so much about detailing over here. If one were to consider loopholes and lack of logic then there’s a lot more that can be said of course. However I think one should also remember that in a film like this suspension of disbelief is quite necessary, at least to ensure that the viewing experience is not compromised. Veteran writer-director Mahendran‘s presence as Minister Vaanamaamalai, Vijay Kumar’s opponent in the film is a surprise choice which thankfully works thanks to the element of unpredictability. “Mottai” Rajendran seems to have made a complete transition these days, here again his role as the Police driver of Vijay Kumar and his trusted aide is in sharp contrast to his villain roles in the past. 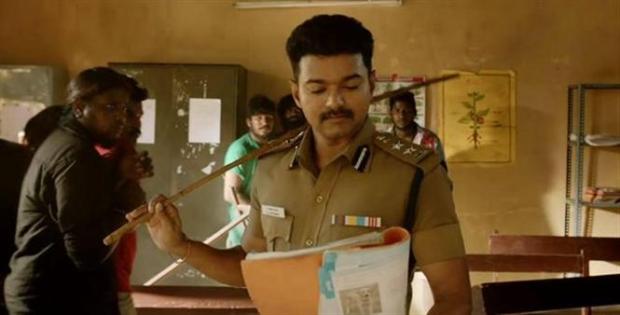 Like many others even I wonder how the film got away leniently with a U certificate as there’s not only a considerable amount of violence in the film, there’s also a forensic expert describing in detail the way a rape victim has had to suffer at the hands of her rapist, similarly later mentioning the graphic details of how badly the same rapist has been badly mauled and mutilated to death. These aren’t conversation points worthy of meriting a U certificate for sure. Being his 50th film as music composer a lot more was expected from G.V.Prakash Kumar but he has disappointed quite a bit with the songs over here, strangely there’s not a single outstanding track in the entire album. George C.Williams‘ cinematography is quite good, the film is visually appealing indeed. The film could have benefited from some trimming, for a very routine and done to death plot , Theri is a tad too long (158 minutes) and perhaps editor Ruben along with Atlee could have done something about this. 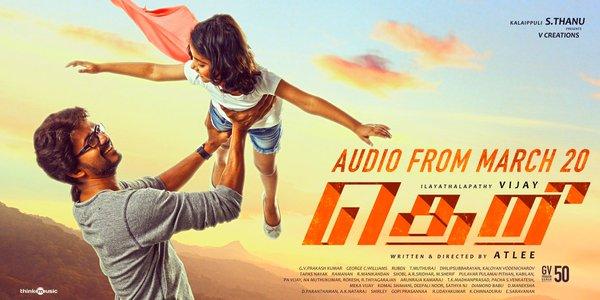 Of the supporting cast Mahendran and Mottai Rajendran are good, the former makes for an interesting villain in fact. Nainika is extremely lively and her interactions with Vijay are fun to watch. Amy Jackson as mentioned earlier is seriously miscast, thankfully she doesn’t really have much to do in the film. Samantha is effective, her romance with Vijay is narrated in an interesting fashion, there’s something earnest about it and different from that seen in most Vijay films. Ultimately despite the routine plot and the various loopholes involved if the film is still watchable it is due to the lively presence of Vijay who has a blast over here (take for example the way he dances to Otha Sollala and the scenes leading to it) and largely staying in control. There are some wonderful moments that he pulls off in style and he has a charming presence all through the film. Overall Theri is not a triumph for Atlee the writer as there is hardly any novelty in the writing as such. However Atlee the director manages to leave a mark, making good use of his leading man and ensuring that the film manages to overcome quite a few odds. Theri eventually is passable fare, nothing more, nothing less.