When I first heard of someone having acquired the official remake rights for the French Film The Intouchables (2011), I was mildly amused. Later when I heard that PVP Cinema was going to adapt the film in Tamil and Telugu, having bought the rights from Guneet Monga I was quite surprised, even a little annoyed I must admit. I was wondering why would they want to really play around with such a sensitive well-made film which is based on a real life story of two friends from totally contrasting backgrounds. With names like Nagarjuna and NTR Jr. being discussed initially, later giving way to Nagarjuna and Karthi and with a director who has a successful track record for making mainstream commercial films, Vamshi Paidipally I was somehow feeling uneasy. After all everything seemed to indicate that this could be the opposite of a simple, fun filled and realistic film, but then I was hoping to be proved wrong.

During its promotional campaign as I got to see the promos and songs, I went on to slowly feel that there just might be an outside chance that Oopiri (Telugu) and Thozha (Tamil) might just work. While interviewing Vamshi Paidipally I was pleasantly surprised to find a straight forward filmmaker who was quite frank with his opinion on various issues regarding Oopiri/Thozha and even his previous films. There was not the slightest hint of arrogance or over confidence that could be expected considering his successful track record. Hence I actually started hoping that the film should turn out to be really a sincere adaptation as was being spoken about, and if that is the case then it could also serve as an example of how not to allow yourself to get carried away by the image of people based on their earlier work. Both the versions (Oopiri and Thozha) went on to release to a great response from both the audience and critics, and whatever little doubt I had I knew would get addressed when I would watch it as well. So has Vamshi Paidipally actually managed to make a honest adaptation of The Intouchables? Also has his maiden attempts to make a bilingual film and enter Tamil cinema succeeded? Well let’s find out from the rest of this post.

If you’ve seen or heard of The Intouchables or even seen the trailer of Thozha/Oopiri you are probably familiar with the plot already. Vikramaditya (Nagarjuna) is a billionaire who is now a quadriplegic after a bad accident in a paragliding attempt 5 years ago. He has a secretary, Keerti (Tamannaah) who helps him with work and finds it a problem to get the right kind of caretaker. Seenu (Karthi) is quite the opposite of Vikram, he is street smart but a school dropout who is now on parole from jail and is in need of an assignment that will help him in completing his jail term a lot sooner. As they say opposites attract and Seenu ends up landing the job of Vikram’s caretaker much to the annoyance of Keerti. Seenu is bowled over both by the palatial house that belongs to Vikram and by the attractive Keerti and takes up the assignment. What follows is an unlikely tale of friendship and camaraderie between Vikram and Seenu who are as different as chalk and cheese.

In terms of the plot per se it isn’t really ground breaking even if it was an original film as such, I say this because you do expect the characters to follow a certain arc and they do that unflinchingly. So in a sense there isn’t any major surprise. Thozha/Oopiri starts and end in a fashion that’s exactly similar to the original film, not only that there are lots of other scenes and moments that are more or less faithfully similar to those in The Intouchables. But then what’s an adaptation if the film doesn’t have its own charm, bringing in elements that make it stand out and/or stay relevant to the native audience and keeping their sensitivities in mind. So there’s a lot of emotion on display, lots of it peppered with statements like search for your happiness at the place where you lost it or if only money was everything then I would be the happiest man in the World. And there’s a lot of humour in the film as well, most of it staying well under control and effective. In fact every time the film hits an emotional chord, Vamshi Paidipally almost makes it sure to ensure that it is balanced by a humorous moment as well.

Raju Murugan (director of Cuckoo)’s dialogues (Abburi Ravi in Telugu) ensure that the lines spoken in the film never get stretched and heavy. Also for a change it’s good to see that Vamshi Paidipally and producer PVP Cinema have left no stone unturned in ensuring that this is a bilingual film in every sense of the term. The setting looks genuine, the actors sound convincing while mouthing the lines (irrespective of whether they have dubbed it themselves or not) and the choice of actors is also found suitable enough for both the versions.The main characters are played by the same set of actors, the casting choices working out very well and the difference if any remains only in the form of a few smaller characters, none that make a difference to either of the two versions. There is enough to shed a tear or more and enough to leave you smiling or even make you laugh, that’s why the film works to a large extent.

With Karthi and Tamannaah around obviously there is a romantic track which isn’t quite there in The Intouchables but then thankfully Vamshi Paidipally makes sure to limit it to just a few casual yet humorous scenes and one dream song. This angle never really overshadows the core theme of brotherhood and the unique bonding between Vikram and Seenu. There are various moments from the film which still linger on in your mind, longer after you have seen the film. Take for example the whole segment around modern art which involves Karthi, Nagarjuna and Prakash Raj, it’s handled with elan and charm. The interactions between Seenu and Prasad (Prakash Raj) who is Vikram’s legal adviser and best friend are again very interesting and both the actors complement each other quite well. The film has a few cameos including those by Anushka and Shriya Saran, but both of them are present in the film with a well-defined purpose and I am happy that Vamshi Paidipally has gone to ensure that they leave an impression despite limited screen presence. Shriya Saran looks stunning and it’s a pity that we don’t really see enough of her on screen these days.

For a film that gets most of the points right it’s a little debatable as to whether the item number was really needed. But what’s not debatable at all is the crude and silly portion that involves a gay character, this was totally insensitive and unnecessary. The film is also a tad lengthy (around 158 minutes) but then the editors (K.L.Praveen for Thozha and Madhu for Oopiri) take care to ensure that the pace of the film never drops. Having 2 different editors for the 2 different versions also is an indicator of the director and the producer’s efforts at coming up with a bilingual film that’s genuinely relevant in both the languages. Gopi Sunder‘s songs are of the type which look good with the film, but perhaps not something you might keep going back to as the year progresses. The supporting cast led by late Kalpana (in one of her last few appearances) and Jayasudha are quite effective. Prakash Raj is quite convincing in a role where he remains restrained. 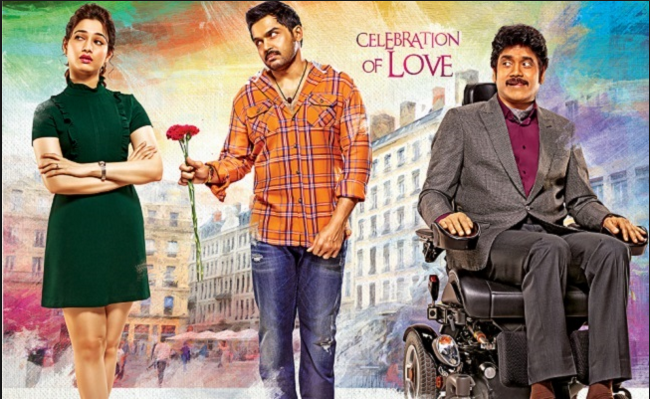 Tamannaah doesn’t really have much to do but she does justice to her part and has even dubbed for herself (in Oopiri) which shows her positive approach to work. Nagarjuna and Karthi play contrasting characters with great comfort and balance each other wonderfully. After playing a dual role, including one with flamboyance in his previous film (Soggade Chinni Nayana), it’s a different outing for him here as Nagarjuna plays a character who is mostly restricted to a wheelchair in the film. But his fans have nothing to worry for he comes up with a heartfelt performance, even dubbing for himself in Thozha. Karthi is pitch perfect playing Seenu, a character that is well within his comfort zone. While the role does remind us of some of his earlier films here he does not get to bash up the bad guys, mouth punch dialogues or appear very convincing when it comes to romance. In fact the comfort level that these two men share is very apparent, making a lot of scenes appear fresh and interesting.

For the producer PVP Cinema this is their second successful outing in a row (after Kshanam) and it’s good to see the way they have backed Vamshi Paidipally all the way. As someone who has made a stark departure from commercial potboilers , Vamshi Paidipally has certainly made an impression with this outing indeed and shown that if one is committed to the craft then making a bilingual film, including a language that one is not familiar with is not impossible. Thozha/Oopiri is indeed a celebration of life, so go on and watch it with your friends or family, it’s highly unlikely that you will be disappointed.

Note: Thozha and Oopiri are playing with English subtitles in select screens outside the home territories (Tamil Nadu and Andhra Pradesh+Telangana).

2 thoughts on “Thozha Movie Review: An Unlikely Tale of Friendship That Works Quite Well”