Harvey Dent once said this – “The night is the darkest just before dawn.” This movie is about the darkest part. As far as summer blockbusters go, this was the biggest showdown of all.

Some 5 hours into the film, Batman, sitting in his Batwing, barks at Alfred, “What is Happening?”.. The reply over his comms is “How best to describe it?”.. Well, that should tell you about the film! The most iconic superhero slugfest is far from what was promised. Or, let me say, what most people expected from it. 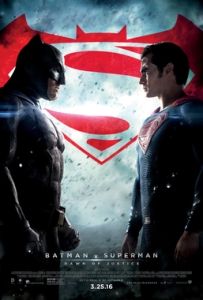 You see, therein lies the problem. EXPECTATIONS. All of us have seen Man of Steel (2103), which was Zack Snyder’s (Lack of) vision of the first ever comic superhero. Well, the premise (along with a new man behind the bat mask) was too much to look over. We all went in thinking of it to be a experience akin to reading Frank Miller’s fantastic Return of the Dark Knight. Alas, only the bad memories of the worst superhero films returned!!

Batman v Superman takes place a year and a half after Man of Steel. Superman (Henry Cavill) is a hero, but despite his version of saving the city, some people are starting to realize that a godlike being could be their worst possible nightmare and bring despair. Superman destroys one of Bruce Wayne’s buildings by accident, which makes Wayne hate Superman. You see, Batman only approves of the destruction of private property when he’s the one doing the destroying. We see his launch missiles, fire bullets and bring down buildings on his own later in the film, but that is okay, I guess. He is well, Batman. But he’s not an alien, so it’s OK.

Logic is not what leads one to watch a superhero film. For comic book fans, it is how their favourite icons are brought to life. For the rest, it is about witnessing great CGI & jaw dropping action. Both these sets of people are left disappointed because, 1) this is in no way a homage to the great (if not greatest) DC comic / graphic novel published, 2) the action & CGI are just as boring as the rest of the film.  There are action scenes. Yes, Superman is stronger. Batman uses a super suit &  gadgets. They go against each other against a mind numbing BGM score (Hans Zimmer & Junkie XL). The score is enough make your head hurt.

As far as performances go, Affleck does a fine job as Bruce Wayne. He has what it takes to portray an aged, wiser, weary Dark Knight of Gotham. Just that he is made to do / dream some weird things that just does not let you accept him as batman just yet. That said, I shall wait for the solo batman flick!

Henry Cavill, playing Superman, is actually the second fiddle in the film. Poor chap just does not have anything to do other than blurt robotic / moronic dialogues and keep a grim face. This could have been a fun outing for him. Alas, he is saddled with too much grimacing.

What  can be termed as the biggest calamity in this film, as far as performances go, is Jessie Eissenberg playing Lex Luthor. I quite don’t know how to put this in words. Words fail me to describe the most atrocious attempt at playing a super-villain. Jokes online of how he says that he took cues from our own SRK’s Darr and Baazigar only make it worse. As if the dialogues were not juvenile, cliched and bad, he delivers them in the most contrived manner ever.

It is not all bad though. We do have some 5 to 6 glorious minutes of good performances as well. Jeremy Irons plays Alfred, Bruce Wayne’s famed butler with enough wit and elan. He is a delight to watch & hear. Unfortunately, he speaks to the computer most of the time in the film.

Then there is Gal Gadot playing Wonder Woman. Enough said, right? She looks fab and her introduction as Wonder Woman is one the few moments that wakes you up from slumber. She has a distinct and kick ass BGM score to boot.

Pretty much everything else in this dark, grim film is a let down. The climax, the most interesting part in most superhero films, is a colossal train wreck.3 heroes (or 2 heroes and 1 heroine) go up against the most horrific CGI monster in the history of superhero films. Doomsday looks as if he was made for the Richard Donner Superman film of the 80s. He swings on buildings, lands punches and does the same things again.ZZZzzzzzz.

I can go on and on about the granular mistakes of the film. That would be both time consuming and hurting. So, let me try and summarise the biggest problem of the film. The problem with the film is  – Zack Snyder!! He does not know his comics, or at least does not respect them enough to give us the film that should have been at the highest pedestal of superhero films. His flair for visuals desert him. The whole film is darker than the chest hair of Anil Kapoor. It is as if Metropolis & Gotham do not have sunlight at all. All the excruciating and boring “action sequences” happen during the night and takes a toll. 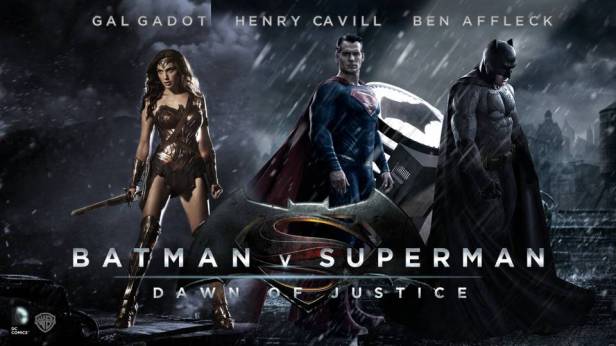 While some may still go out on a limb and support the visual grammar, the writing is the most incoherent in a long time. The reason this movie was supposed to be a drool worthy experience was because it was supposed to be structured upon the famous Dark Knight returns. Miller’s iconic book delved into Batman & Superman’s  very different ideologies of justice and goodness, and in turn to spur their fistfight. Though this is not the only time they fight, it is  their most iconic fight. And it sets up the very real idea that two good men, perhaps the very best men, can have vastly different views of what a good world looks like.

This movie is nothing like what we have read about them. This is just 2 people having a go at each other. No one in the film is motivated towards anything. They just go about mouthing English dialogues written by the worst hindi movie dialogue writers. The very reason for the fight is so worthless that you feel angry at having chosen to see this film.

Some might still say that the film is not bad. Might be.But one cannot ignore the fact that it is a huge missed opportunity, as far as superhero films go. Marvel is already waiting to fire it’s cannon with Civil War that suddenly seems a lot more interesting than it did before!!

One thought on “Batman vs Superman: Dawn of Justice (2016) Movie Review: A Colossal Train Wreck”