Back in school and college I was quite patchy when it came to sports. Unlike academics or extra-curricular activities I could somehow never become consistently good when it came to sports. On my good day I would perhaps have a blast be it while playing Volleyball or Ball Badminton. But there were days when I would routinely hit the net with a pass or fail with my serve, to the desperation of all others in my team. So I can in a way relate to someone who feels that he has it in him to be a big gangster, someone who can trade off punches quite well and win any brawl. But in reality the person actually turns out to be diametrically the opposite, failing in form and technique very often when facing his opponents in a fight. Added to this is the burden of the person in question being a loner of sorts (here I defer), both wanted and unwanted by the people he works with, depending on the situation.

This is what Kathir (Vijay Sethupathi), the male protagonist in Nalan Kumarasamy’s Kadhalum Kadanthu Pogum (love also shall pass) aka Ka Ka Ka Po is all about. He’s a rowdy who went to jail after taking a rap as instructed by his boss, an influential man who had promised Kathir that he would be well taken care of after his return from prison. Kathir doesn’t want to do anything else apart from running a bar and is not happy doing mediations or going on a collection drive as before. In sharp contrast with Kathir is Yazhini (Madonna Sebastian), a young girl with an engineering degree from one of the countless colleges in the state. Yearning for a career in the I.T sector, she finds it difficult to convince her parents to allow her to shift from Villupuram to Chennai, eventually attempting to run away before her parents finally get convinced and allow her to move on. Yazhini goes on to get her dream job and her life is a happy journey for a while as she has a blast living well, sharing an apartment with friends and liking her life overall.

You wouldn’t really think that these 2 people have anything in common right? Well yes actually they don’t. So if they were to meet under certain strange circumstances what would happen? Just because it’s a movie would they have to fall in love? Would that look convincing thanks to the backgrounds and the character arcs of Kathir and Yazhini? Well Nalan definitely seems to have found the premise interesting enough, so much so that the producers (C.V.Kumar and K.E.Gnanavel Raja) actually went on to buy the remake rights of the Korean film My Dear Desperado (2010) on which Ka Ka Ka Po is based on. It’s another matter that a Hindi film Jayantabhai Ki Luv Story (2011) was also made on similar lines, that it met with a disastrous fate at the box office is another story altogether. I must admit that after the wonderful black comedy Soodhu Kavvum (2013) I was quite surprised when I heard that Nalan’s next film is a remake, but then after watching Ka Ka Ka Po I am also feeling a little relaxed, maybe because despite being a remake he has left behind his stamp as a filmmaker.

Going back to the film, we see Yazhini lose her job in a few months as her firm shuts down. Due to this she decides to cut down her expenses by moving to a small flat alone in a slightly run down area. Who do you think is living in the flat opposite to hers? Well, of course it has to be Kathir indeed. As mentioned already there’s hardly anything in common between the two of them and there are no sparks flying when they meet for the first time. In fact it is one of the most nonchalant yet funny moments that one can think of in a situation like this as Kathir starts off by sympathizing with Yazhini about being all by herself and struggling to shift her belongings to her flat, only to leave her high and dry without actually lending a helping hand. Yazhini and Kathir continue to meet, being neighbours and all that, but there’s nothing routine or conventional about them. What happens to Yazhini and Kathir from there on, do they go on realize their individual dreams and is there something interesting that happens between them are what we get to see as the rest of the film unfolds.

For a film which was touted as a rom-com I must say that this isn’t really a conventional rom-com in any sense. The romance as such is hardly seen or expressed and only felt at places, especially towards the culmination of the film, that too in a very non obtrusive manner. As for the comedy, well yes there is quite a bit of it on display, but it is of the subtle variety and the kind which would make you smile but not really make you hold your stomach as you roll around laughing. Like the point in the restaurant when Kathir asks all the other patrons to shut up and just carry on eating, when a young girl raises her hand up and asks how can one eat if his/her mouth is shut. Or the whole portion towards the end when Kathir faces the two interviewers and keeps them engaged, much against their wishes. While it is but natural to think of and compare Kathir’s character with that of Pondy Paandi (from Naanum Rowdy Dhaan), there is something distinctly different between these two characters, despite all the similarities. 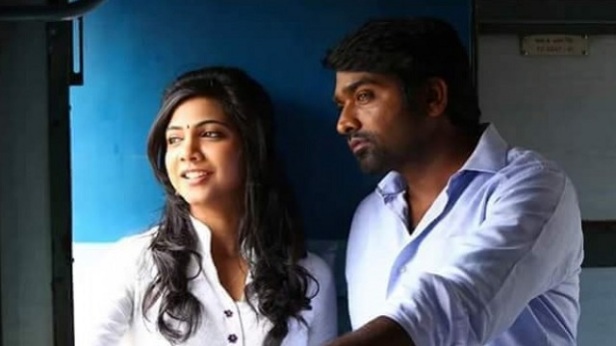 While Pondy Paandi is a wannabe gangster who is actually a little faint hearted as well, Kathir is someone who is bored of the usual crime routine and would happily settle down as a bar owner instead. Kathir is also someone who isn’t really afraid of anything, despite knowing that he has his own limitations. Nalan Kumarasamy also throws light on the practice of gang leaders encouraging their trusted members like Kathir in a lot of ways, yet at the very same time not really allowing them to prosper. Talking of Yazhini yes one could probably wonder how come someone as charming and appearing wonderfully as Madonna Sebastian could fit in as someone from Villupuram, belonging to a middle class family but ambitious herself. But I think Madonna’s presence, despite all her picture perfect appearance serves to provide a wonderful contrast between the character of Yazhini and Kathir. It is almost like telling us, look how much in contrast they are, almost like chalk and cheese.

There is a lot to like about the film, in particular I liked the part when Kathir is being called by the owner of a bar (Silk Bar in an open reference to Silk Smitha with a lovely photograph of hers on display) for help and comes in totally with a lot of swag, threatening to beat the shit out of the men creating a nuisance in the bar. But what happens thereon is both comic and quite realistic and also very unheroic in a way, but the way he beats an exit from the bar is something to be seen for yourself. If in his recent release Sethupathi, Vijay Sethupathi goes on to apologise to his wife, something not seen in Tamil films usually, here in Ka Ka Ka Po he is a gangster alright, but not really the guy who calls the shots, again a little unusual for a hero in Tamil films. Also the interactions between Kathir and Yazhini are very interesting, with the former being the rowdy and the latter being the ‘pakkathu veetu ponnu’ to each other, for most part of the film. What also works is that both of them subtly realize that they are in a way lonely and could do with the company of each other, but nothing other than that.

All said and done this isn’t a film that would perhaps appeal to everyone, for starters the film is quite leisurely paced and there never really seems to be any urgency of sorts. Also for those who went in expecting a rom-com, there might be disappointment in store actually. However if these things don’t bother you and, if the World of Kathir and Yazhini manages to captivate you then you could certainly enjoy this ride. Dinesh Krishnan’s cinematography impresses and once again his combination with director Nalan Kumarasamy (after Soodhu Kavvum) seems to have delivered quite well. Leo John Paul once again shows that he is an exciting talent as an editor, by now having worked on most of C.V.Kumar’s productions, including Nalan’s Soodhu Kavvum. He seems to have worked well in tandem with Nalan to ensure that the film gets the kind of pacing that’s optimum. Santosh Narayanan’s music works in flow with the narrative and except for the “Ka Ka Ka Po” (lyrics by Mohan Rajan, vocals by Santosh Narayanan and Meenakshi Iyer) track which is quite energetic and effective; all the others just help the tale move ahead.

Nalan Kumarasamy keeps the focus more or less on the lead pair; hence we never really get to let our eyes rest on any of the supporting characters, despite some of them looking quite interesting. Even Samuthirakani who plays the ex-cop is mostly spoken about while actually seen in very few scenes in the film. Vijay Sethupathi and Madonna Sebastian deserve a lot of credit for making the film work to a major extent. As Kathir and Yazhini they bring out the contrast between their characters wonderfully. Kathir has his quirks; Yazhini has her ways of approaching situations. The booze session scene between them is quite a good example of the two of them complimenting each other pretty well. Vijay Sethupathi continues his good form, signaling that he’s very much here to stay and why not, as he has many more films lined up for the rest of the year. Madonna Sebastian who had impressed in the Malayalam blockbuster Premam gets the centre stage this time and makes great use of it. For someone in her second film and her entry into Tamil films, she seems to be extremely confident and comfortable on screen.

Going by the trade response so far Ka Ka Ka Po seems to have worked out quite well indeed for Nalan and the producers. It’s a film which has been well adapted locally and is quite suited to the Tamil audience as such. Despite my initial misgiving with the way the film actually culminates, on hindsight I feel it’s an interesting way to end the film as we are free to interpret what Kathir and Yazhini go on to do in their lives. Now that Nalan has proved that his decision to go ahead with a remake for his second film has worked more or less, it will be interesting to see what he comes up with next. Go watch Ka Ka Ka Po, especially for the lead pair which makes the film worthwhile indeed.