Ee Thanutha Veluppan Kalathu (In this Cold Morning) is termed as a murder mystery film, but to term it is a murder mystery would be being lazy on our part. Directed by Joshiy and written by Padmarajan, the film offers an interesting perspective for the audience as to how different directors bring a certain style and have their own take on a screenplay. 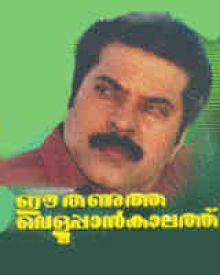 The film begins with Justice Vasudev (Babu Namboothiri), who has returned from Delhi immediately due to some work. We see him talking to his wife and daughter in Bombay over the phone. Immediately the scene is intercut with a man, entering his house. There is a sense of impending doom and urgency, as Joshiy intercuts the scene of justice and intruder.

The brilliance in the script is that we do not see Hariharan just as a cop, we equally spend time inside his home. A repeated theme in Padmarajan’s films was debate over mysticism and atheism. Padmarajan does not take sides. He usually shows the view point of both sides. While Hari cannot understand why his wife goes to an astrologer for every case he is assigned, his wife on the other hand is of the view that as long as it does not interfere with his work it should be ok for him, and it is indeed the case in case of Hari.

The film deals not only with investigation, the better part of the film focus on how does police produce evidence. Hari is a police officer for whom truth is important, than the closing of a case.

Mammotty as Hariharan is a perfect fit, especially in a film where there is no specific mannerism for a cop.There is nothing which makes the character stand out as hero, even when he presents his case to the senior, there is no machismo, he is a man who knows how the system works.

Joshiy and Padmarajan devote a considerable time in the film to explain narco analysis. They do not glorify it, or condemn the use. Their viewpoint is simple, narco analysis are not the gospels of truth, it is up to a good police officer on how to use tools available to him.

The last act of the film which comes with a flashback, is what makes the film superior. It showcases the fact that how after a crime is committed, the scar remains for a lifetime with the victim, while the predator moves on. Is justice all about revenge at any cost at the end of the day?

In 20 minutes, Joshiy makes us root for the killer by asking ourselves the question is revenge worth it? That is what makes Ee Thanutha Veluppan Kalathu a good film.