Cop movies have a certain charm, almost all Superstars in India have donned the grease paint for the role of a cop, be it Salman in Dabbang, Aamir in Sarfarosh, Amitabh in Zanjeer, Vikram in Saamy, Suresh Gopi in Commissioner etc. Cop roles have propelled our actors into superstardom. 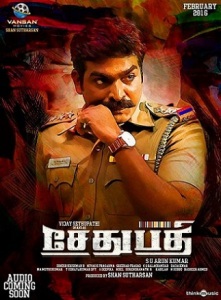 When we are introduced to Sethupathi, we do not see him facing goondas or saving someone. We see him indulging in mock fight with his kids. Sethupathi is a law abiding and pragmatic police officer. He is someone who knows how the system works, he is not a cynic, but he is not overly enthusiastic like a new comer on the job.

Sethupathi is entrusted with the job of investigating the murder of a policeman, wherein he crosses path with local henchman Vathiyar. The film narrates the cat and mouse tale mouse between the Cop and the Vathiyar and how the Cop overcomes the obstacle is the crux of the film.

Sethupathi could have ended as a typical run of the mill cop film, but in the able hands of Arun Kumar he gives us a film which is not illogical, but engaging, taut, and at a run time of 121 minutes is crisp. Look at the chase sequence where he mixes heroics with reality on how cops really chase the accused. He goes a step further, the hero is tired and drinks water after the chase. I do not remember seeing last time a hero getting tired after a chase.

Sethupathi does not go ballistic on his superiors or enquiry commission, he knows to change the system one has to work inside the system. Sethupathi is an honest cop, but he surely is not white, he is in the grey zone. He is someone who knows the limitations of the law, but knows how to use it effectively to punish the convict.

Sethupathi is a cop who is at ease while using face time with his wife, and in the second half of the film he does the unthinkable, he apologises to his wife, which as far as I remember a Hero in Tamil cinema has not done such a scene in a long time. 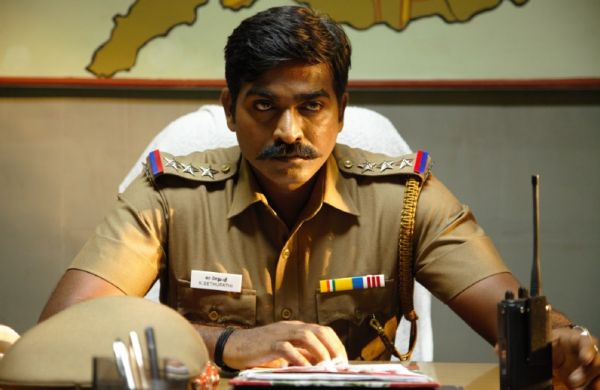 The songs are always a tricky situation in masala films, but director Arun uses songs effectively here. The Hey Mama song which comes in the second half of the film, is used twice. The brilliance lies in how Arun uses it to establish both his Villain and Hero using the same song.

Sethupathi belongs to one man, it is Vijay Sethupathi. He does not resort to punch dialogues or slow-motion. All he uses is his eyes, he does not even raise his voice in the major part of the film. When he slaps a cop in a public place, look for the scene following it where he drinks with his team.The interval scene where he is ashamed of himself, when he discovers the Judas in his team, and of course when he covers his face with a handkerchief. We root for Sethupathi to win.

Arun handles the scenes effectively, he does not waste time on giving lengthy monologues to hero. His Sethupathi does not give lectures on how he will beat criminals, he just simply beats them. For some reason, Sethupathi has been called as a masala film by most critics. I believe it is a solid real entertainer in the guise of a masala film, it is like the healthy food which a mother makes for her children, but tastes like junk food.

Full marks to Arun for bringing freshness in a genre which has been done to death. Sethupathi is reminder to two facts 1- How a good actor can elevate a masala film from average to good 2- A good director can give us an entertaining film in a genre without resorting to tropes associated with that genre.