I grew up like many others at a time when probably no one even used a term like sexual abuse especially when it came to minors. Not that sexual abuse is a recent phenomenon; it was definitely quite prevalent way before I was born, but it wasn’t something that people spoke about openly for a long time. Perhaps the stray voice that would come out with any honest claims of being sexually abused would have been hushed up by people around them, also for many people earlier the very concept of someone being sexually abused would have been difficult to accept or digest. If you probably try to think carefully maybe you might just be able to relate to something that probably suggests your own personal tale of abuse, or something that you perhaps heard of or saw in your ignorance. Thankfully these days there is growing awareness and an increasing sensitivity exhibited by many people when it comes to addressing something like this.

Of course there is still a long way to go before we probably feel safe around ourselves, for now maybe we should continue to hope that more and more people continue to be aware of the perils of sexual abuse and look at ways of preventing it. Needless to say handling people who have gone through this trauma is another difficult but important task by itself. I still remember getting jolted by Mira Nair’s Monsoon Wedding,where the topic was addressed with a lot of maturity and touched upon all the relevant aspects associated with the same. Of course there have been lots of other films which have also gone on to address the same topic later on, in the process our awareness of this issue has certainly improved. We often hear of how it’s not always a stranger who commits a heinous crime like sexual abuse and how on the contrary it is easier for someone elderly and trustworthy to commit the act, especially when it comes to minors. We have heard of quite a few Godmen/Babas etc being apparently involved in such acts, incidentally a film like Tom McCarthy’s Spotlight tells us that irrespective of religion, this is one practice that can be seen across commonly.

Spotlight is a film that focuses upon The Boston Globe’s “Spotlight” team, the oldest continuously operating newspaper investigative unit in the United States, and its investigation into cases of widespread and systemic child sex abuse in the Boston area by numerous Roman Catholic priests. This is based on a series of stories, uncovered as part of its special investigation that was carried out by the real Spotlight Team, going on to fetch The Boston Globe the 2003 Pulitzer Prize for Public Service. In 2001 The Boston Globe goes on to hire a new editor, Marty Baron (Liev Schreiber) who on reading a column in the Globe about a lawyer Mitchell Gerabedian (Stanley Tucci), feels that there is something serious about the lawyer’s claim that the Cardinal Law/ Archbishop of Boston was aware that one of the priests of their order was guilty of sexually abusing children, but did nothing to stop him. Baron feels that the story needs investigating and urges the “Spotlight “team led by editor Walter “Robby” Robinson (Michael Keaton) and including journalists Mike Rezendes (Mark Ruffalo), Sacha Pfiffer (Rachel McAdams) and Matt Carroll (Brian d’Arcy James) to handle the same. Over a period of several months, Walter and his team go about investigating the story, discovering many things in the process.

Some of the discoveries startle the team and even Baron; they are even faced with situations where the Catholic Church clearly suggests that they put a hold on the investigation, doing so in various ways. But this only strengthens the resolve of the team all the more, leading to a very tense and interesting finale. This is a simple human drama with just about the right kind of investigative thriller’s edge which keeps you glued to the screen all the way. The screenplay by Tom McCarthy and Josh Singer ensures that there is no untoward sensationalism forced into the plot at any point of time. The writers also need to be commended for the way they have incorporated certain moments into the film, like for example the scene when Robinson admits to the team that he had received a list of 20 paedophile priest’s way back for a story in 1993, something that he had never followed up on. The way Baron responds to that admission from Robinson comes across as dignified and mature, something that you’d hope to see in your own workplace as well.

The scenes that involve interactions with victims of sexual abuse, like when Sacha speaks to some of them are quite profound, thankfully never getting melodramatic. Also impressive is the scene early on when Baron gets to meet the Cardinal and is gently but effectively conveyed a message. It’s also interesting to see that everyone in the Spotlight team including Robinson are all Catholics themselves, in the course of their investigation they go on to feel and react quite differently when it comes to questioning their own faith in the Church. We also get to see how things can be totally dynamic in the media space, like when the September attacks of 2001 happen the Spotlight team has no other go but to put their investigation on hold for obvious reasons. Tom McCarthy who is known for having written films like Up (2009) and Million Dollar Arm (2014) has gone on to handle a real life story extremely well over here, and that he does so with a completely fantastic ensemble cast speaks even more volumes of his worth. No wonder that the film has been winning a lot of awards and is nominated for both Best Director as well as Best Original Screenplay for the forthcoming Academy Awards. 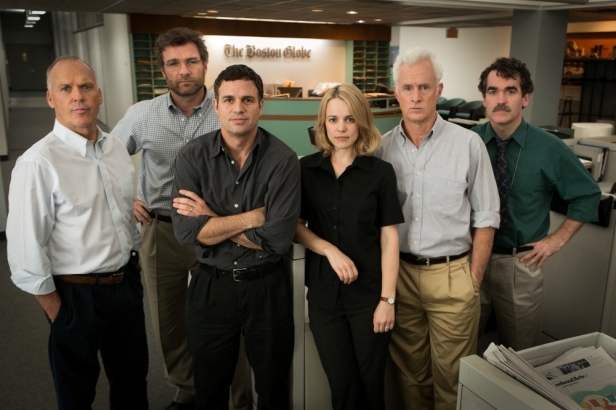 Talking of the star cast it’s indeed wonderful to see the film more than benefitting from the choice of actors on board. Including the minor characters, nearly everyone manages to leave an impact in the narrative, again credit to Tom McCarthy as well for being able to manage the same. Stanley Tucci as the busy and slightly difficult to handle lawyer Mitchell Gerabedian is well and truly in his element while Brian d’Arcy James as Matt Caroll and Rachel McAdams lend the Spotlight team a lot of credibility and variety. Live Schreiber as Marty Baron looks extremely convincing as the “outsider” and Michael Keaton is more than effective as Robinson, the head of the Spotlight team. Mark Ruffalo portrays Mike Rezendes in a way which holds the audience’s attention easily with just the right mix of swag, cockiness and brashness. As the tale draws to a finale one does know how it may culminate, yet you are still intrigued and wanting to see how it pans out and that in a way is definitely an indication of Tom McCarthy’s triumph.

As the film ends we get to see a list of places in the USA as well as Worldwide where the Catholic Church has been accused of concealing abuse by their priests and the list includes Ollur in Thrissur district of India, certainly not something to feel happy about. But it’s also a grim reminder of the fact that religion still continues to be powerful and does try to hoodwink people into glossing over things that it wouldn’t like to be ever highlighted. Spotlight also tells us that sexual abuse is prevalent everywhere and can happen to anyone at the hands of anyone. It would only be absolutely right to mention that Spotlight is an impactful film,a film too important to ignore and a film that’s definitely one of the best of Hollywood in recent times.