The tale of Neerja Bhanot isn’t one that’s narrated too often, and Ram Madhvani sets out to change that. Madhvani’s repertoire of work includes some award-winning ad campaigns like the famous Happydent commercial that won the silver lion at Cannes, and the critically acclaimed, and sadly criminally under-viewed Let’s Talk, that introduced Boman Irani to Bollywood. Therefore, when it was announced that he was going to bring Neerja Bhanot’s story to life on celluloid, and cast Sonam Kapoor in that role, there was some trepidation, as Sonam’s not exactly been a favourite of the critics. So the question here is, was justice done to her legacy? 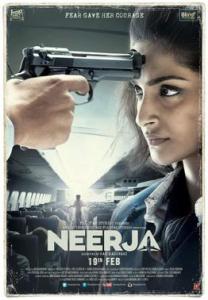 Neerja Bhanot (Sonam Kapoor) is an up and coming model, also working as a flight purser for Pan Am. A vivacious girl rallying from an abusive marriage and subsequent divorce, she spends her days surrounded by her doting parents Harish, and Rama (Yogendra Tiku and Shabana Azmi), brothers Aneesh and Akhil, and smitten paramour, Jaideep (Shekhar Ravjiani). On the night of 5th September 1986, as she boards Pan Am Flight 73, on her first assignment as head purser, little does she know that things are never going to be the same, as the plane is overrun by Palestinian terrorists led by the vicious Khalil (Jim Sarbh).

The first thing you notice about Neerja, is how understated and naturalistic everything is. Ram Madhvani eschews his usual slickness reserved for advertisements, to create a cinematic experience so real, you feel like a fly on the wall observing everything, up close and personal. The writing by Saiwyn Quadras and Sanyuktha Shaikh, while fairly good for the most part does run the risk of being called contrived in the second half, when right in the middle of the action, we are forced into a flashback. It is to the cast’s credit that they make it look credible, and yes, one may justify it as part of the lead character’s stream of consciousness in the moment as she tries to compose herself, but it adds a minuscule level of flab to an otherwise taut narration. Technically, the movie is top notch, with the cinematography and editing by Mitesh Mirchandani and Monisha Baldawa respectively, creating that tense atmosphere during the hijack sequences, and also bringing out the warmth during the interactions between mother and daughter. 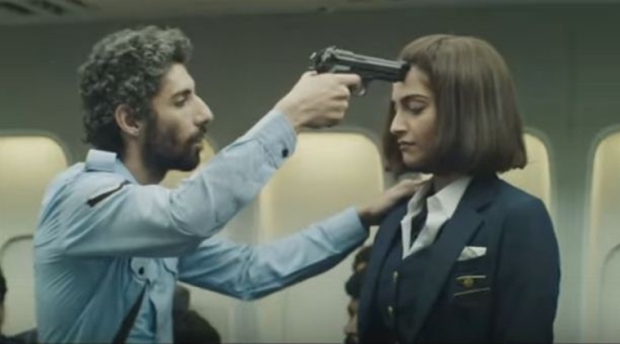 First things first, Sonam Kapoor deserves a massive round of applause for her performance here. She reins her natural vivacity in for the most, to put forward a heartbreakingly tragic performance of a woman who is courageous, yet vulnerable in the most trying of circumstances. Shabana Azmi as her doting mother is brilliant, and brings out the pain of a grieving mother rather convincingly, as does Yogendra Tiku as her hapless father. Jim Sarbh makes a fantastic debut as the feral hijacker, Khalil, and has you squirming in your seat, every time he is on screen. Shekhar Ravjiani makes a pretty decent debut as Neerja’s boyfriend, and does a fine job in his rather limited screen time. A mention must be made of the 3 kids, who are comforted by Neerja during the hijack, as they put up a very convincing performance.

Overall, Neerja’s a highly satisfactory movie watching experience, although one would point out a few minor quibbles, such as the slightly dull stretch in the 2nd half, and the slightly manipulative nature of the climax and epilogue. But in the face of Sonam Kapoor’s brilliant performance, among other things, this can be overlooked. This one’s a must watch.