I need to begin this post with an apology; this was to be originally written and published a few weeks ago but got delayed for unavoidable reasons. Nevertheless Two Countries is continuing to play in theatres in Kerala and a few cities outside and I see no reason to delay the review any more. Incidentally the film is still going strong and has now completed 50 days of release in Kerala. Its Telugu remake rights have just been bagged by Bandla Ganesh; perhaps we might see a few more similar announcements over the next few weeks as well. Two Countries was one of the 4 Christmas releases of 2015 and has easily gone on to be the winner, turning to be a positive outing at the box office for everyone concerned with the film. For director Shafi whose previous two films, Venicile Vyapari (2011) and 101 Weddings (2012) turned out to be disappointing, Two Countries has brought him back into the limelight. 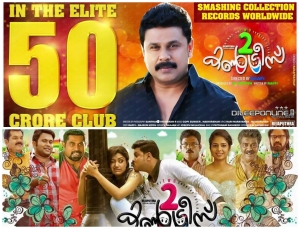 The film has also come up at the right time for its lead actors, Dileep and Mamta Mohandas who have done a few films together before, most notably the super hit film My Boss (2012). For Dileep while Love 24×7 turned out to be a box office dud, Jeethu Joseph’s Life of Josutty did not turn out as well as expected and hence the super success of Two Countries will probably prod him to choose the right kind of films. Mamta who has been battling health issues hasn’t tasted solo success after Celluloid and thus Two Countries brings her back into reckoning. Interestingly the film is written by Rafi, the elder brother of director Shafi and this happens to be their first collaboration together, after the split of the Rafi-Mecartin duo. Two Countries might remind one of My Boss in a few ways, but it is quite an original film that does appear genuinely entertaining.

A Malayalee in search of greener pastures is nothing new, but how about someone who is so keen to strike it big without hard work that he is willing to even get married, or even break his impending wedding? Now this sounds a little interesting right? Now how about making one of the women in the tale a non Malayalee and the other a childhood sweetheart of the hero? Adding to the madness is the presence of a dysfunctional family and topics like alcoholism and immigration addressed with quite a bit of freshness. Hooked or at least intrigued by all this so far? Well these are not points in isolation but actually some of the salient highlights of Two Countries in a way. The film begins and ends in a small town in Kerala, but the bulk of the tale unfolds in Canada and for a change the use of a foreign locale doesn’t come across as a tax rebate necessity but rather as a plot driven requirement.

Ullas (Dileep) is someone who clearly is keen to become successful without too much of an effort. He is aided in all the pursuits for success by his dear friend, Avinash (Aju Varghese). Fortune seems to smile on Ullas finally when his wedding with Simran (Isha Talwar), the good looking yet physically challenged sister of the cranky moneylender Patel Ji (Makrand Deshpande) gets fixed. But life takes a curious turn for him when by a sheer act of mischief he comes in contact with Laya (Mamta Mohandas), a girl whom he had a crush on as a child and who is now settled in Canada. Circumstances ensure that Laya expresses her desire to marry Ullas and now he decides to forego the commitment to Simran and get married to Laya, enamored by the NRI dream of making it big in Canada. So the two get married and Ullas moves to Canada, but what seemed like an easy way of striking it rich and becoming successful turns out to have been a decision taken in haste and oversight. Nothing could have prepared Ullas for the kind of shock that he was to face on landing in Canada.

What is it that goes wrong in case of the relationship between Ullas and Laya? Do they manage to get things resolved and does Ullas manage to fulfill his NRI dream? Well the answers for all these are realized as the tale proceeds in a comfortable pace. We all know that when it comes to comedy there’s no stopping Dileep, after all he has made a big name for himself over the years thanks to his family entertainers with a high dosage of comedy. But sadly in recent time’s filmmakers and writers began to typecast him in slapstick comedy outings, mounted in a manner that would remind one rather of a Tamil or Telugu masala film rather than a Malayalam film. While some of these films did do well commercially, it was not long before the audience started getting tired of these template films. My Boss despite being inspired by The Proposal (2009) was definitely an exception and so was last year’s Chandrettan Evideya. Thankfully the writer-director duo Rafi and Shafi make sure that they give us a clean comedy, sans any brazen tomfoolery.

The film does well to reference films like Bangalore Days and even Ezham Kadalinikkare (thanks to the Niagara Falls song) and is able to carry the references on a humorous note very wonderfully. Initially one could be put off by the blatant amount of drinking exhibited in the film, but as the tale proceeds you realize that this is not a film that is trying to pander to the current socio political situation in Kerala by cashing in on the bar controversy. It’s not that often that you see a heroine who is depicted as a full on alcoholic in Malayalam or even Indian cinema and that too without being judgmental. Added to it being the fact that we get to see a dysfunctional family in all its glory over here, again something that is definitely not a common sight in Malayalam films. What is important to note is that these are elements that do not come across as artificial or misplaced in the film for sure.

Santhana Krishnan Ravichandran in his first independent assignment as cinematographer doesn’t disappoint and has put his learnings from work on various Bollywood films to good use over here. As a result the film certainly looks visually pleasing and has the right mix of various hues and has been shot in some interesting places including the Niagara Falls. Gopi Sunder seems to be in superb form these days and Two Countries is yet another example of his good work. Be it the soulful “Chenthengin” (vocals by Najim Arshad), the playful “Thanne Thanne” (vocals by Karthik and Abhiya Hiranmayi) or the instantly likeable “Veluveluthoru” (vocals by Afsal), all the songs (lyrics by Hari Narayanan) are certainly pleasing to the ears.There are quite a few well written moments in the film, take for example the scene when Laya surprises Ullas by suggesting they spend some time in a local toddy shop, an act which has far reaching consequences in their lives later on. Even the “twist” at the end is quite refreshing and bears a direct connection with the proceedings in the earlier part of the film.

There is enough and more to cheer and laugh about in the film, thankfully the humour doesn’t appear forced and contrived. The film has a solid supporting cast, all of them lending a creditable presence to the film. Aju Varghese is dependable as always and so is Mukesh, while Suraj Venjaramoodu genuinely leaves a mark, easily one of his better performances of late. Ajmal Ameer and Isha Talwar are seen in cameos while Lena, Makrand Deshpande, Ashokan, Jagadish, Vijayaraghavan, Srinda Ashab, Rafi, Vinaya Prasad also get noticed. One of the main reasons for the film’s success is the lead pair as Dileep and Mamta Mohandas vibe very well together and the chemistry is clearly visible on screen. Mamta gets to play Laya a slightly complex character with quite a few eccentricities and she does pull it off quite convincingly. She also matches Dileep nearly on almost all counts, which is quite a feat. Dileep on the other hand is quite wonderful as he essays Ullas in his own inimitable style. This is the kind of role that he is really good at handling and Shafi ensures that he plays to his strengths over here, making it a treat to watch him perform.

After a couple of flops Shafi ensures that he is back with a bang and the writing by his brother Rafi seems to have worked out quite well indeed. This is a typical festival film which reaches out to the entire family and acts as a stress buster. Don’t venture for the same expecting a game changer of a film, but if you are looking to be entertained then it’s very unlikely that the film will disappoint you.