“Do not meddle with the way I coach”, says Prabhu (R Madhavan) to the assistant coach. “If I had listened to you, she would be cleaning toilets like you do”, he says pointing out to the aspiring woman boxer Madhi (Ritika Singh). “I may be the one cleaning toilets, Sir” replies the assistant coach, played by the excellent Nasser. “But you are the one who stinks”, he retorts with arguably the best line written for Tamil cinema this year. (And the year has just begun!). It is, therefore, so very disappointing that Sudha Kongara(Story/Screenplay/Direction) and Arun Matheshwaran (dialogues) choose to punch below their weight and could get this brilliance  only occasionally transmitted on the screen. (But Sudha delivers as a filmmaker – more about that later). 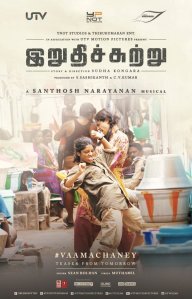 It was frustrating to see a scene where Madhi is made to fight above her weight class and get knocked out only so that she gets to knock out the same opponent (the opponent now has shed weight conveniently to fight Madhi) in the climax. It was frustrating to see Zakir Hussain play an evil association chief, who plays politics in such a way that even front benchers could understand what he is up to. (“The pain has gone, but the scar remains”, he tells Prabhu in a scene – how I wish this feeling was integrated into his character). It was frustrating to see a childish Genghis Khan strategy in the climax flight. (Could not help but remember the wonderful Iqbal’s last over!)

Frustrating because the narrative fails to capture the muddle, spirit and irony of women’s boxing. Frustrating because when Sudha and Arun deliver, they deliver beautifully. I was literally taken aback when the real relationship between Madhavan and Radharavi was revealed in such a casual manner (need to watch the film again now that I know what their relationship was). The scene where Kaali Venkat steals cable signal to watch his daughter on TV, the one handed push ups by Madhi making Prabhu take note of her (lovely bit of imagination and yet so real), Madhi borrowing her shoes from her sister for the training, just one shot which explains Prabhu rescuing Madhi from the police station, her subsequent gratitude and the scenes which show her unquestioned trust and loyalty towards Prabhu. These are so well written and in line with the characters, yet creating so many poignant moments in the film.

And Sudha is a first rate filmmaker. Gautham Vasudev Menon spoke highly of her during Drohi but I did not see anything worthwhile in that film. Irudhi Suttru is challenging for a filmmaker both in terms of plot (women’s boxing) and in terms of scale and logistics. Sudha is pitch perfect in her casting and gets great work done out of her crew. (Santhosh Narayanan and Sivakumar Vijayan‘s work deserve special mention). 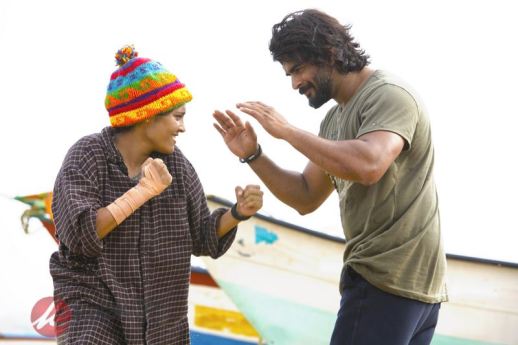 And ultimately the film belongs to its protagonists, Madhi and Prabhu (in that order). Madhavan is fantastic as Prabhu. A role about a fallen sports champion trying to redeem himself after a few years by becoming a coach for the women’s team would definitely bring back memories of the iconic Kabir Khan, but Madhavan does well in differentiating with his performance style. “Students thinking that they have fallen in love with their teacher is not something that has happened only to you”, he tells Madhi. “I am as old as your father, just focus on boxing”, he tells in a restrained manner.

This restriction does not apply to the role of Madhi. Madhi is carefree, happy, bold, brave and fiesty. Ritika Singh, playing Madhi, brings magic to screen. This film would not have worked with any other actor except Ritika (or at least any known actor). She is luminous, she is uninhibited and she is free flowing as a performer. And instinctively she infuses heartwarming earnestness in her character. Truly the find of the year. (And I know the year has just begun)!

How I wish I could have said the same about the film. It had the potential to deliver a knock out, disappointed that it is a winner only by points.

View all posts by Anand