Growing up as a child I used to be quite fond of films with revenge as its theme, perhaps due to the fact that such films would be high on action. Well those were the days when most boys would be into action films and I was no exception to it. Most actors playing heroes have acted in revenge subjects, some of them in multiple revenge films as well. In particular I liked stories where the underdog has to fight back and claw his way towards becoming equipped enough to tackle his powerful adversary, perhaps making the connect all the more better. Telugu cinema is no exception to this phenomenon and heroes of every generation have been part of such films. Over a period of course the fatigue factor began to set in, both among the audience and filmmakers. After all how long can you dish out the same thing again and again? But as long as you managed to convey the tale with some novelty, the audience continues to be receptive; no wonder films like Ghajini, Vikramarkudu or Eega have succeeded. 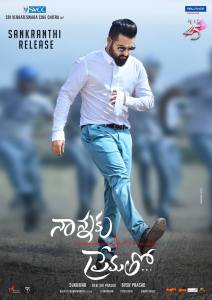 When I first heard of Sukumar’s Nannaku Prematho I was slightly surprised, after all he hasn’t done an out and out emotional subject so far. But considering it was an NTR Jr. film and also being NTr’s 25th film I also realized it cannot be an out an out emotional family tale, after all there has to be something in it for the fans as well right? Added to it being the fact that this was the first time that Sukumar was working with NTR Jr. increasing the expectations. Despite his previous film 1: Nenokkadine having evoked a mixed response, it did raise a lot of curiosity, resulting in a good opening as well. But with the title, the promos and whatever information was being revealed it certainly looked like Nannaku Prematho would be something that probably hasn’t really been attempted by Sukumar so far. Now whether this would turn out to be successful and how novel would the film be is what I was curious to find out while watching Nannaku Prematho.

The film is completely based in the U.K and starts with Abhiram (NTR Jr.) losing his job, but going on to start his own firm in characteristic style. On hearing that his father Subramaniam (Rajendra Prasad) is critically ill, he rushes to be with him. Subramaniam realizes that he is suffering from cancer, in fact his days are numbered and informs his sons (Rajiv Kanakala and Srinivas Avasarala being the elder brothers) that his original name is Ramesh Chandra Prasad and that he was one of the wealthiest entrepreneurs in U.K, only to lose everything after being cheated in business by Krishnamurthi (Jagapathi Babu), an act which makes him ditch his real identity as well.  Unlike his brothers Abhiram realizes that his father would prefer to die with dignity and for that he decides to bring down Krishnamurthi’s massive business empire, all in a span of 30 days, i.e. before his father departs. How does Abhiram take on the financial might of Krishnamurthi and does Subramaniam get justice is what the rest of the film is all about.

At the core level this is just a simple revenge story, something that I’m sure all of us have heard various times before. After all what’s so great about a son wanting to take revenge on behalf of his father who has been wronged, you might ask. And my honest reply would be forget being great, it’s not even something that qualifies to be novel by any means. But despite all this if a rather simple tale of revenge like this that might appear predictable also ends up being engaging by and large, then credit largely goes to Sukumar’s writing. Despite a largely routine premise the screenplay ensures that there are a lot of smart and well thought of moments. Strangely Sukumar allows the first half to move along at a leisurely pace, as he goes about trying to set up the confrontation. By the time the actual confrontation happens one is more or less hooked to the proceedings.

The charm lies in the way the two main characters, Abhiram and Krishnamurthi have been fleshed out. Krishnamurthi is definitely not a regular villain who would prefer to tackle the hero with brawn; instead he is someone who clearly comes across a suave, calculated adversary, someone to be wary of. Abhiram on the other hand is someone who is fond of mind games, who likes to take calculated risks and is happy to outsmart someone with his brain. Thankfully the film is devoid of loud punch dialogues and unwanted comedy, interestingly even the violence seen is very minimal, quite unlike a typical NTR Jr film. For a film that’s supposed to be mainly about 2 men trying to outwit each other, Abhiram and Krishnamurthi actually come face to face for the first time only a little before the interval block. Sukumar brings in a lot of scientific references like the “The Butterfly Effect”, also using statistics at places to explain happenings. Despite sounding like an overdose at times, Sukumar takes care to keep it simple as much as possible.

The film has been completely shot abroad and has been mounted well. Vijay C.Chakravarthy’s cinematography captures the wonderful locales in all their glory and charm. Devi Sri Prasad’s songs work to an extent, though sometimes the placing does appear odd. The “Follow Follow” track (lyrics by Devi Sri Prasad and sung by NTR Jr. himself) is quite catchy and has been shot well. Coming to performances, Rajendra Prasad and Rajiv Kanakala are the only ones among the supporting cast who get some good screen time and they are quite effective. Madhoobala appears in a cameo as Divyanka’s (Rakul Preet) mother and doesn’t get any scope at all. In a film which is mainly about the confrontation between two men it’s good to see the female lead also getting a lengthy role over here. Rakul Preet is charming and is a good choice for the role of Divyanka; she has even dubbed her lines herself in this film. Jagapathi Babu looks dashing and is quite convincing as the ruthless and convincing Krishnamurthi. NTR Jr. is pitch perfect as Abhiram, not only is he at his stylish best but he appears in a role which calls for subtlety and pulls it off quite effectively.

Eventually Nannaku Prematho is just a simple story of revenge but then Sukumar ensures with his treatment that it works largely despite its flaws.