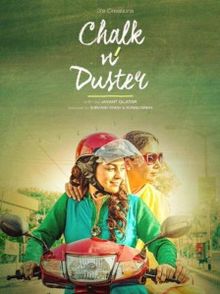 The number of private schools in Mumbai is burgeoning rapidly; and privatization means cut throat competition and no job security. Chalk and Duster attempts to throw some light on the plight of teachers in private schools who are paid far less than their counterparts in public schools but face a lot more work pressure along with the constant fear of losing their jobs. The film also tries put across the nobility of the profession of teaching and how it does not get its due in today’s world.

Now, the storyline does not sound too bad and the competition between private schools in Mumbai has seldom been explored on screen. But you just have to see Chalk and Duster to know what a royal mess the film is.

In the beginning itself we get to know that the writers haven’t bothered to give any gray shades to their characters; the good and the bad have been clearly defined. Kantaben High School is a popular private school in the suburbs of Mumbai. It has been running in fairly the same manner for the last few decades. The management is old school and is caring enough to waive off fees of the teacher’s children. But the son of the trustee comes back with a ‘MBA from London’ and carries the ambition of making the school the best in the city. The supervisor Kamini Gupta (Divya Dutta), who is clearly the ‘bad’ from her very first scene onwards, smells the opportunity and convinces the young foreign return trustee of her vision and capabilities to make the school a top one in the city. He makes Kamini (the name gives you a hint of the character’s motives) the principal who starts running the school like a tyrant. She plans to instate new ‘young and pretty’ teachers to attract rich kids, but for that she will have to replace the old horses. As Dutta goes about executing her plan, she faces a stiff opposition from Vidya Sawant (Shabana Azmi), the veteran maths teacher who is not only competent but also loved by all. Vidya is terminated from her job for her outdated techniques of teaching trigonometry and unable to bear the shock she suffers from a heart attack. The science teacher, Jyoti (Juhi Chawla), feels she has had enough and approaches a news channel which has already blown this issue out of proportion.

The film till this point despite being a bit simplistic is still watchable, but what follows is plain nonsensical stuff. After some cringe worthy lecturebaazi on how students forget their teachers and how it is a thankless profession, the two factions – Vidya and Jyoti Vs. The school – agree to settle the dispute over a KBC like quiz contest, much to our bewilderment. There is a particularly unintentionally hilarious long scene wherein Vidya’s students, now working all over the world in globally renowned companies, give tributes to her. The direction by Jayant Gilatar touches rock bottom in this scene, not that it is much higher in any other scene. Another scene that competes for unintentional hilarity is the one in which ex-students of Vidya and Jyoti are so moved by the plight of their teachers that they take out rallies in support of them with banners and all. The dialogues throughout are pedestrian. Some twists are so unimaginative that you are left wondering how anybody agreed to invest their time and money in this film.

Shabana Azmi as the benign, competent and hardworking mathematics teacher is the only major plus of this otherwise terrible film. The veteran actor underplays the role and lends a lot of grace to Chalk and Duster. The highest point of her performance being the moving telephone conversation with her crippled husband from the hospital bed. Her character too is the only decently sketched one in the entire film, that also gives us a peek into her world. Juhi Chawla is charming as usual, but gets to mouth a lot of ordinary dialogues that robs her of a memorable performance. Others are just caricatures including the tyrannical principal Kamini Gupta played by Divya Dutta. Richa Chadda as the fiery news anchor looks very uncomfortable, but Rishi Kapoor seems to enjoy himself as the anchor of the quiz contest. Jackie Shroff’s role as the chairman of a rival group of private schools also adds to the unintentional hilarity, thanks to the english dialogues assigned to his character.

Jayant Gilatar has, thus, taken up a relevant and fresh subject, but the treatment is shoddy, to put it mildly. He has also managed to cast A listers, but the way in which the plot unfolds in the second half leaves you bewildered and also makes for some generous amount of unintentional hilarity. The potential to make a genuinely touching film is wasted.