This is a simple story of love, about simple people told simply. That is how Bikas Mishra describes Chauranga, his first feature film in a sentence. Simple however, the film is not by a large measure. Neither is the journey of this writer film maker who is savoring the release of his film across the country.

A quick look across multiplexes shows limited screens listed for Chauranga, something that is not surprising given the star obsessed movie industry we all live with.  A small non main stream film like this has to jostle for mind space and footfalls whenever it releases, even in a lean week like this one. “It does not really matter though, there is an audience for Chauranga and films like it” says Bikas confidently, “films like these have made it to the screens and even run well in the recent past proving that content , good content at that, is appreciated.” Even a film in Khortha, a dialect from Bikas’s village near Hazaribagh in Jharkhand. “A lot of my experiences in my life, growing up where I did are reflected in the film” adds Bikas as we discuss how tough it was to make a film dealing with issues usually brushed under the carpet by many in our society. 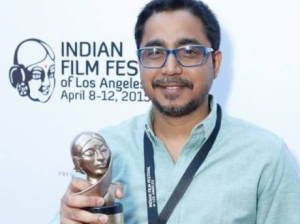 Was it tough to find backers to get the film see the light of day? “On the contrary no, at no point did we compromise on what we had set out to make.” Asserts Bikas. “We were making a small film, in terms of budgets yes. The vision and ambition of the film was never touched. We have made a film we wanted to in the first place.” He credits a lot of this feat to his producers Onir and Sanjay Suri, the latter in fact came on board first as a producer before taking on the role of the evil landlord in the film.

“Onir’s backing opened doors for more support like from NFDC for the movie” says Bikas with quiet assurance, and why should he not, when his first film is backed by National Film Development Corporation (NFDC), which also received cash grants from Sweden’s Goteborg Film Festival as well as the NFDC’s annual Film Bazaar. In fact, Chauranga took shape at NFDC’s screenwriter’s lab as well, before taking the form it has today.  For an outsider to the industry with a passion for movies, this is indeed a remarkable journey.

Is it that easy for everyone though? “It is, not easy exactly, but yes there are opportunities today galore” says Bikas, naming the NFDC Screenwriters Lab and the Drishyam films Sundance Lab among a host of platforms encouraging fresh voices in film writing in the country today. Yet, a lot of these original writing and search for new voices is on the fringes of the industry where a mindless star vehicle breaks box office records with alarming alacrity while genuine films pushing the envelope of movie making have to make do with a passing mention.

“It is the media that is obsessed with these films and their paraphernalia” states Bikas emphatically. Stressing in the same breath about how alternate, digital media is turning out to be the oxygen of film makers like him, he says that in the future digital media will trump the mainstream and content will triumph over frivolity in the name of reportage on cinema in India. “It is happening too; blogs (he very kindly mentions MadAboutMoviez too here) and online magazines are bringing learned assessment of movies and educated analysis and discussion on the art of making films to the fore. Mainstream regular media is taking note of it as it feels the pinch. It isn’t too long before the latter finds itself out of favor with the audiences” says the man who not so long ago was the power behind one of India’s foremost movie blogs, Dearcinema.

As we chat more about writing and good cinema and its support, talk veers to his cast all of whom are the peak of their forms in the movie, and are people known to support good cinema whole heartedly. Was it tough to work with them? “They are all actors with a body of work behind them, good strong roles behind them. The kids have an enviable theatre background, Tanishtha, Sanjay are well known faces and then there is the veteran Dhritiman Chatterjee” adds the maker who goes on to praise their commitment to the films idea in glowing terms.

What is next for this film maker then? Chauranga has opened in Indian screens on the back of glowing reviews and accolades from across the world, November 2014 saw it winning the top prize for Indian films at the 16th Mumbai Film Festival, the Golden Gateway Of India Award (India Gold), while April 2015 brought the Grand Jury Prize (Best Feature) at the Indian Film Festival of Los Angeles. “I am now just waiting for the reactions to the movie” says Bikas nonchalantly, his Zen like calm reflective of his assuredness in his craft and his film. Something Chauranga too amply demonstrates, that despite its flaws, is a very searing mirror to the seemingly unending caste violence in our society. We need more such mirrors to ourselves before real change happens. We need more Bikas’ amongst us before our cinema changes too.