One thing that is undeniable about Bejoy Nambiar is the fact that he is talented. But, a common complaint about his works so far is that they have been visually appealing, but lacking meat. Shaitan for example, started off with a bang, but ran out of steam halfway and fizzled out rather meekly. David was an interesting experiment in storytelling, but fell apart due to the poor writing, especially in the case of Vikram’s plotline. But that being said, both movies had the stamp of a maker, who wasn’t afraid to acknowledge that he possessed his own style. And there is a method to his flashiness, unlike that of a Sanjay Gupta or a Rohit Shetty. So when he decided to combine his visual flair, with the solid writing talents of Vidhu Vinod Chopra and Abhijat Joshi in Wazir, it created a lot of anticipation for the project, but does it live up to the expectations of a discerning audience? 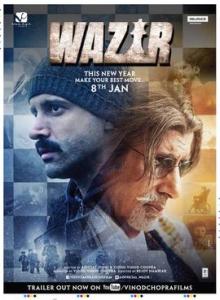 Danish Ali (Farhan Akhtar) is a tough and dedicated member of the Anti-Terrorism Squad, who is dedicated to his wife Ruhana (Aditi Rao Hydari) and daughter Noorie. One day, in pursuit of a terrorist, Noorie is shot dead, and Ruhana blaming him for the tragedy, leaves. In the midst of this, Pandit Omkarnath Dhar (Amitabh Bachchan) comes into his life, to help him get over his grief. Panditji however is dealing with a tragedy of his own, the accidental death of his daughter Nina, at the house of a minister, Yazad Qureshi (Manav Kaul), and is under the impression that the minister had something to do with it. As things escalate, Panditji and Danish are set on a collision course with the minister, in a deadly game that will require them to use their wits, and all the resources at their disposal, if they have to come out of it alive.

Now the above plot sounds rather exciting on paper, and would have been on celluloid too, if, and only if the writing by VVC and Joshi had not been so insipid. The biggest flaw of the movie that proves to be almost fatal, is the fact that it doesn’t know what it wants to be. The movie goes from an intellectual thriller to a series of ruminations on life, tragedy and loss to an over-wrought revenge saga, and falls flat on its face on almost all counts. Even though Shaitan and David were highly flawed pieces of work, they had a few moments like the Khoya Khoya Chand sequence in the former, and the entire London plotline in the latter, that stayed in your mind long after you walked out of the theatre. But other than a brilliantly shot shootout in the beginning of the movie, not one scene, not one frame stands out in your mind, and that is even more shocking when it comes from a visual virtuoso like Nambiar. Add to this the unmemorable soundtrack, that seemed to have been done as an afterthought, unlike his previous works.

Amitabh Bachchan makes the most of a very inconsistently written part. He manages to alternate between good humored, affectionate, grief-stricken and vengeful without it coming off as jarring. Farhan Akhtar however bears the brunt of a half baked part, and lacks the charisma to pull through, especially in the second half, where his attempts at ramping up the intensity come across as acts of petulance. Aditi Rao Hydari is wasted in a role that relies too much on her luminescence, as she manages to bring out the pathos of a grieving mother through her eyes impeccably. One must applaud Manav Kaul for managing to make an impact in an ensemble cast, such as this one. John Abraham and Prakash Belawadi are criminally wasted in inconsequential roles. As for Neil Mukesh, the hype surrounding his negative turn in this movie, can be equated with the hype around his getting a part in the next season of Game Of Thrones.

In the end, Wazir suffers from trying to do too much, and not succeeding in anything. Pity, considering this one had the potential to be an edge of the seat thriller that tested the audience’s grey cells.